The lawsuits seek relocation and financial awards for thousands of people. 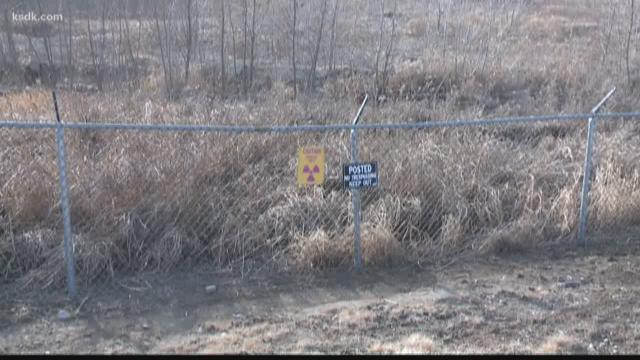 The suits seek, among other things, buyouts or relocation and financial awards for thousands of people who live or own businesses near the West Lake Landfill and Coldwater Creek.

St. Louis lawyers Ryan Keane of Keane Law and Anthony Gray of Johnson Gray Law lead a team of attorneys filing suit against many companies and agencies that at one time dealt with radioactive waste leftover from the creation of the first atom bomb.

That waste was moved in the 1940’s from a processing facility in downtown St. Louis to a storage site near present-day St. Louis Lambert International Airport.

It was then relocated to a site in Hazelwood where it was stored in the open and contaminated Coldwater Creek. In the 1970’s the waste was illegally dumped at West Lake Landfill.

“It’s already a disaster and it could get much, much worse,” said Keane during a news conference Wednesday.

According to the lawsuits, crews with Massachusetts-based Boston Chemical Data Corporation tested dozens of properties in north county and found high levels of radioactive contamination that can scientifically be tied to the waste in the landfill and the creek.

“The uranium that was extracted and brought into this country has a unique fingerprint because it originated outside the United States,” said Keane.

Carla Miller of Maryland Heights lives within the boundaries identified by the lawsuits. She’s been in her home since 2004 and said she’s always felt safe there. But, with the possibility of radioactive contamination, she’s no longer sure.

“I’m really very concerned especially with people with children who are still growing and developing. That scares me,” said Miller.

There were some serious claims of airborne contamination made in this press conference by attorneys representing families surrounding the Bridgeton/ West Lake Landfill. While I wait to see what scientific information the attorneys are willing to share to support this claim, I continue to push my own legislation, HB 1804 to fund testing by the DNR for radioactivity that may be killing Missouri residents.

"I am overjoyed at the announcement of two additional lawsuits regarding legacy nuclear waste left from the Manhattan Project. In the last two years, I've held one hundred town hall meetings on the subject matter and interviewed nearly one thousand residents. While worked to pass legislation for a home buyout for vulnerable citizens, it failed due to powerful corporate interests seeking to ease financial liability.

The HBO documentary (Atomic Homefront) has opened up a new door for St. Louis residents. The EPA preliminary decision has also opened doors for our region. However, I must warn the public, the circumference of contamination is much larger than what the attorneys are outlining in their lawsuit.

In my heart, I want compensation for my constituents to ease their pain. I want a federal "Downwinder" status which will track the health status of residents in the region. There are multiple policy changes we need to adopt immediately.

No matter what, today is a good day. It is a battle we've won. Ahead of us are many more battles. The important thing is to win the war."

Bridgeton Landfill, LLC, a defendant in the landfill suit, issued this response via email:

“Sound science must govern any discussion about community safety and the remediation of West Lake Landfill. The suit is without merit and we will defend against it vigorously in court. Federal and state regulatory agencies, including the Agency for Toxic Substances and Disease Registry of the Centers for Disease Control (CDC), the U.S. EPA and the Missouri Department of Health & Senior Services have all concluded, through years of study and true science, that the Landfill poses no risk to people outside the Landfill’s property. U.S. EPA also concluded that the radiologically impacted material has not migrated offsite. Any additional questions regarding the West Lake Landfill should be directed to EPA Region 7.”

The city of St. Louis is named in the Coldwater Creek suit. A spokesman for the city would not comment on pending litigation.

None of the other defendants responded to our requests for comment.

Anyone interested in more information on the lawsuits should visit stlouisradvictims.com or call 1-800-529-2620. Mailers will soon arrive at homes and businesses in the areas with more information about the suits.

Copies of the lawsuits: