As news broke, leaders responded to the indictment. 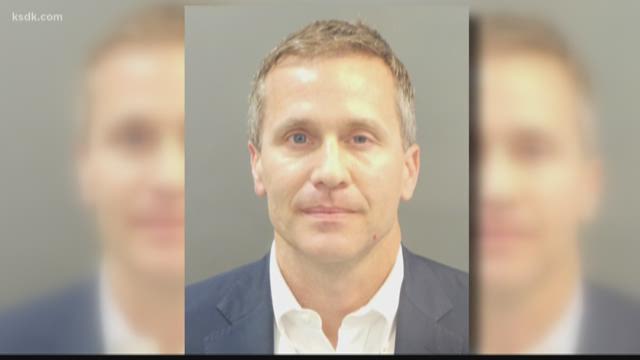 ST. LOUIS – Missouri governor Eric Greitens was indicted Thursday on one count of invasion of privacy.

According to court documents, Greitens knowingly took a photograph of a woman in a state of full or partial nudity without her knowledge and consent and in a place where a person would have a reasonable expectation of privacy.

Greitens was taken into custody in St. Louis and a judge granted his release. According to a copy of the indictment, Greitens has been charged with a Class D felony. He was released without bail, and his next court appearance is on March 16.

Even some members of the Gov. Greitens’ own party at the state Capitol are questioning whether he can lead the state while defending himself against that felony charge, and others just want him gone.

"I am worried about leadership abilities when all of these things are surrounding the governor,” Sen. Mike Kehoe (R - Majority Floor Leader) told 5 On Your Side.

Some republicans in the Missouri General Assembly say they've lost confidence in the governor, and they’re are doubling down on their previous calls for him to resign.

"The clouds that are around the Capitol and across the state of Missouri and bringing all these negative attentions even across the country towards our state. I just don't see that as something we as Missourians would expect from our leader,” said Rep. Steve Cookson (R - District 153).

It’s disappointment shared by members of both parties. Democratic Sen. Jamilah Nasheed announced, "I am calling on the Honorable Speaker of the House Todd Richardson to immediately begin the impeachment proceedings so that the people of Missouri can move forward."

While the speaker didn't go that far, he did say he's launching an investigation into the charges, as legislators continue their work through this political storm.

"Where we go from here is we continue to operate and lead the state and make decisions for the state of Missouri and the people we serve,” Kehoe said.

Below are statements released by local leaders:

“We will carefully examine the facts contained in the indictment and answer the question as to whether or not the governor can lead our state while a felony case moves forward. The people of Missouri deserve no less. We will begin the process of tasking a group of legislators to investigate these serious charges.”

Rob Schaaf, Republican member of the Missouri House of Representatives

“Right now, my thoughts are with the women and families whose lives are forever changed because of Eric Greitens’ behavior and actions,” Sen. Walsh said. “Too often, women in our state and nation are subject to intimidation, threats and even violence at the hands of those in power. No more. It’s time our state takes a stand and ensures that women everywhere are able to seek the justice and equality they rightfully deserve.”

According to the Associated Press, House Minority Leader Gail McCann Beatty said in a statement it will be "extremely difficult for the governor to effectively do his job with a felony indictment hanging over his head. While the criminal justice system must run its course, the governor needs to consider whether remaining in office under these circumstances is the right thing to do for not only himself and his family but for the people of Missouri."

“Gov. Greitens has to go. Missourians thought they voted for a person of character and integrity, and instead they got a liar and alleged criminal. I am calling on the Honorable Speaker of the House Todd Richardson to immediately begin the impeachment proceedings so that the people of Missouri can move forward.”

“The charges against Eric Greitens are deeply disturbing and prove he is unfit to hold public office. Following today’s indictment, Governor Greitens should step down immediately. The people of Missouri deserve a governor who can focus full-time on the issues affecting the state.“The Republican Governors Association should send a clear message that it does not condone Governor Greitens’ illegal actions. The RGA should immediately remove Governor Greitens from its executive council.”