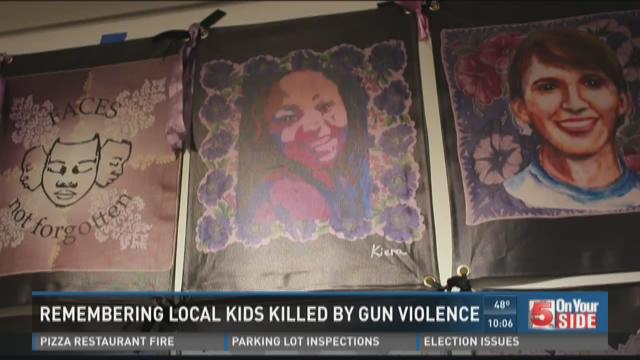 A powerful tribute was given in St. Louis Thursday for children who lost their lives to gun violence. Local artists are making sure the faces of the young victims are not forgotten in the community.

It's an art exhibit that's drawing a lot of attention and emotion. The "Faces not Forgotten" paintings hit close to home for many in attendance, like Sabrina Elam."It means a lot to me that my son is on the middle of this wall," said Elam.

The portrait of her son, Jarred, is displayed alongside 30 other children in the region, all who were recently killed by gun violence.

During the exhibit's unveiling ceremony, mothers of the victims sat in solidarity as their children's names were called one by one. Names like 11- year-old Romell Jones, who was shot and killed in a drive-by shooting while on the basketball court in Alton.

"It's hard but we don't want him to be forgotten. He was an honor student; he was a bright little guy and his death is senseless," said, Christine Ilewski, founder of Faces Not Forgotten.

The artists say their primary mission behind the paintings is to bring a sense of comfort to the families.

Mothers of the victims agree the tribute is another tool to help them cope.

"It just made me feel that my community does care that my children were murdered," said Valerie Dent, another mother of a victim.

The paintings are all donated by the artists. The original portraits are given to the families of the children.

Copies are part of a traveling exhibit, which is also headed for Chicago and other parts of the country.