A local Marine Corps recruiter had his military uniform and medals stolen out of his car in Oakville on Independence Day morning. 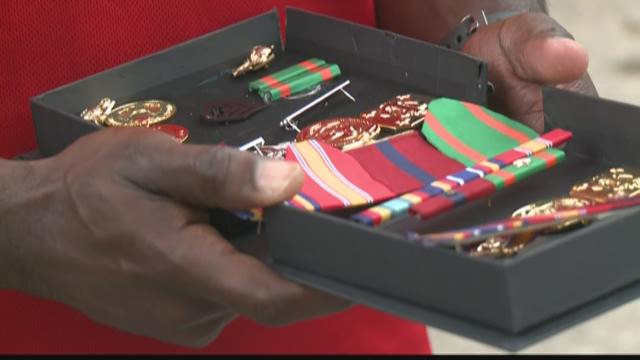 As a proud marine, this Oakville man, who could not be identified because he's an active duty, was shocked when he went to his car to find both his uniform and medals were stolen.

"Initally, like anyone who is victimized its anger," he said.

And of all days, it was Independence Day morning when the items he worked so hard to earn, were swiped from his car.

"I was at a loss on Independence Day someone would break into my vehicle and steal a military uniform," he said.

The medals are priceless. To him, they mean the world.

"A lot of times [with] military members, you don't have to ask me what I've done,” he said. “We wear it on our chest."

But, around noon on Tuesday, he got a call from a man who said he found his medals at Fenton Park, miles away from where they were stolen.

"My first reaction was why is it here and then my second reaction was how do I get it back to the person it belongs too," said John Swanick.

Swanick so happens to be a military veteran who served in the Marine Corps for 4 years.

"It's something that you put yourself out there for and to have somebody take it away; its wrong," Swanick said.

The two had a warm embrace, after John returned the medals. For the Oakville man, a former Marine Corps veteran, finding his stolen items shows how great America can be.

"To have it comeback full circle and to have my medals returned by a marine, you still have to believe in that American spirit."

The Oakville man’s uniform is still missing. He said he just hopes whoever did it returns them to his house...no harm no foul. He just wants his stuff back.

The incident is under investigation. No suspects have been found.