Lt. Col. Troy Doyle filed complaint with Equal Employment Opportunity Commission alleging he was passed over for police chief because he is Black 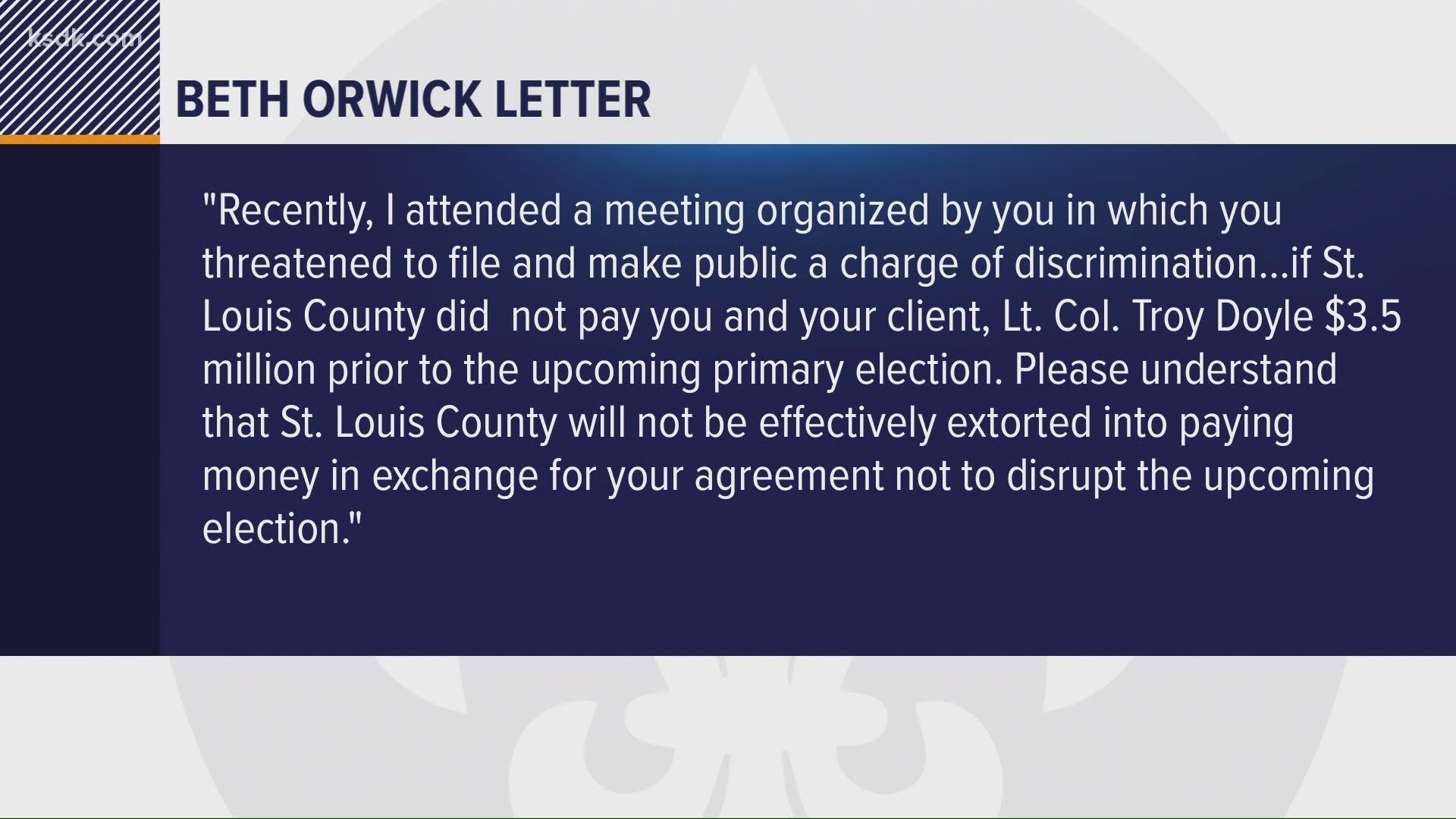 CLAYTON, Mo. — Lt. Col. Troy Doyle has taken the first step toward filing a racial discrimination lawsuit against St. Louis County, alleging that County Executive Sam Page passed him over for police chief because he is Black.

Doyle’s attorney, Jerry Dobson, tells 5 On Your Side he filed an Equal Employment Opportunity Complaint Friday at the federal courthouse.

“I do believe powerful interests in St. Louis County didn’t want Doyle to be chief because of his race,” Dobson said.

Page's spokesman Doug Moore confirmed Page has not yet seen the complaint, but sent 5 On Your Side a voicemail message from Dobson to Page's Chief of Staff Winston Calvert in which Dobson said his client intends to file the complaint before the Aug. 4 primary.

"Before filing, I wanted to give the county an opportunity to discuss resolving this case," Dobson said.

He continued: "I realize we're operating within a fairly tight time frame as to when the primary is taking place."

Moore also provided a copy of a letter dated July 22 in which County Counselor Beth Orwick wrote, "Recently, I attended a meeting organized by you in which you threatened to file and make public a charge of discrimination...if St. Louis County did  not pay you and your client, Lt. Col. Troy Doyle $3.5 million prior to the upcoming primary election. Please understand that St. Louis County will not be effectively extorted into paying money in exchange for your agreement not to disrupt the upcoming election."

She further alleged that Dobson told her that if the county paid within 16 days, he said he would hide the documents in his desk drawer and that "nobody would know" about the complaint.

Moore also pointed to a $750 fine that the Missouri Supreme Court levied against him for violating Rules of Professional Conduct in June 2019 and said the letter shows "disciplinary action against Dobson for the same type of activity going on with this case."

“Troy Doyle was my choice for chief," Page wrote. "The commissioners, whose independence is why I nominated them, chose someone else.”

Dobson did not provide 5 On Your Side with a copy of the complaint, but summarized what's in it.

In the complaint, Doyle alleges Page had him “interview” with two police board members before Page nominated them to the board.

Barton is the first woman to lead the department. She is white.

“Mr. Page told Mr. Doyle that he was getting some push back from the St. Louis Police Foundation about him being chief because of his race and Sam Page also told Doyle he was having difficulty getting donations from large corporate donors,” Dobson said.

The Police Foundation is a nonprofit that raises money from the business community to fund police-related projects. Its chairman Doug Albrecht provided the following statement to 5 On Your Side Friday:

"The mission of the St. Louis Police Foundation is to support the rank and file of both the St. Louis County and the St. Louis Metropolitan Police Departments with equipment, services and other resources that they request. I have never talked to Sam Page about the appointment of the County Police Chief. In fact, the last conversation I had with Dr. Page was in October 2019, more than three months before Chief Jon Belmar announced his plans to retire. As a 12-year-old organization, we have not and never will get involved in hiring and personnel issues."

Not long after Barton’s appointment, a campaign contribution was made to Page by a “large corporation.” He did not reveal the name of the business or the amount it contributed.

Page has insisted publicly, and as recently as this week during a debate on 5 On Your Side, that he does not control the Board of Police Commissioners.

But Doyle said Page told him the board “does what I tell them to do,” Dobson said.

Page appointed four of the five members of the Board of Police Commissioners. Two of them are Black. And three of them are white.

Their appointments were part of the fallout from a $20 million October jury verdict in favor of a gay police sergeant, who accused former Chief Jon Belmar’s administration of passing him over promotions because he is gay.

Dobson argues Doyle was his department’s go-to guy when something needed to be fixed.

Belmar put Doyle in charge of St. Louis County Justice Services after there were multiple deaths from natural causes there in 2019.

And Page appointed Doyle in recent weeks to serve as the liaison with a private police consulting company hired by the business community to conduct a review of the department’s policies and practices.

“This is the man the county looks to when they’ve got difficult situations,” Dobson said. “So he can do a top-to-bottom review of the police department, but he’s not the best person to be chief?”

Dobson said Doyle respects Barton, but he believes he is better qualified for the job. He served as a lieutenant colonel for years and had experience with many aspects of the department. Barton served as supervisor of a precinct for only a few months before becoming chief, and was a captain, he said.

Once an EEOC letter is filed, the commission has 180 days to determine whether Doyle has enough evidence to pursue a lawsuit.

“We believe the evidence will support these allegations,” Dobson said.

Other Stories By Christine Byers 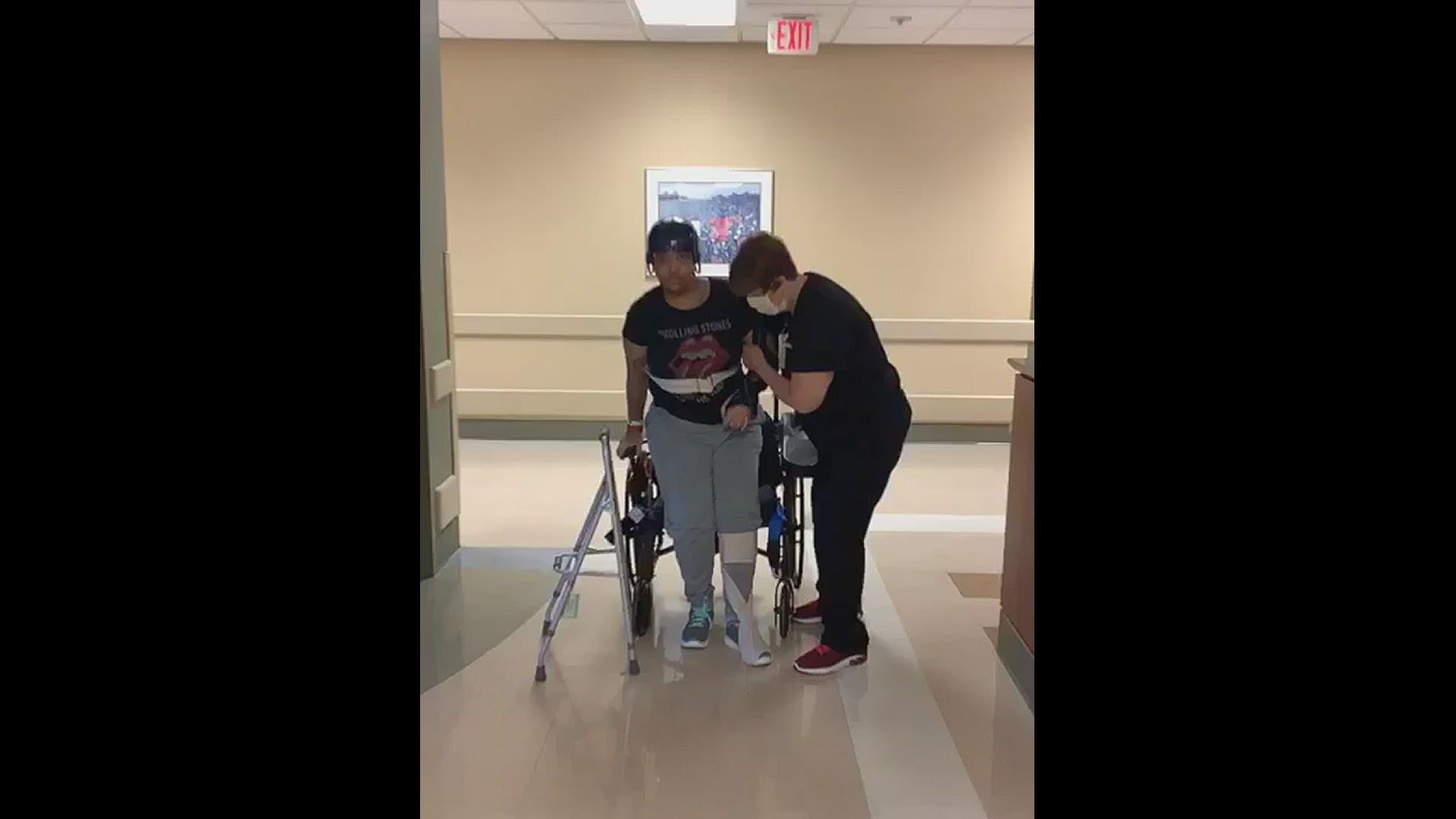