Ninety-eight-year-old Charlie Kohler still has the scars from the battle of Iwo Jima. He was badly wounded and his brother Eddie was killed. 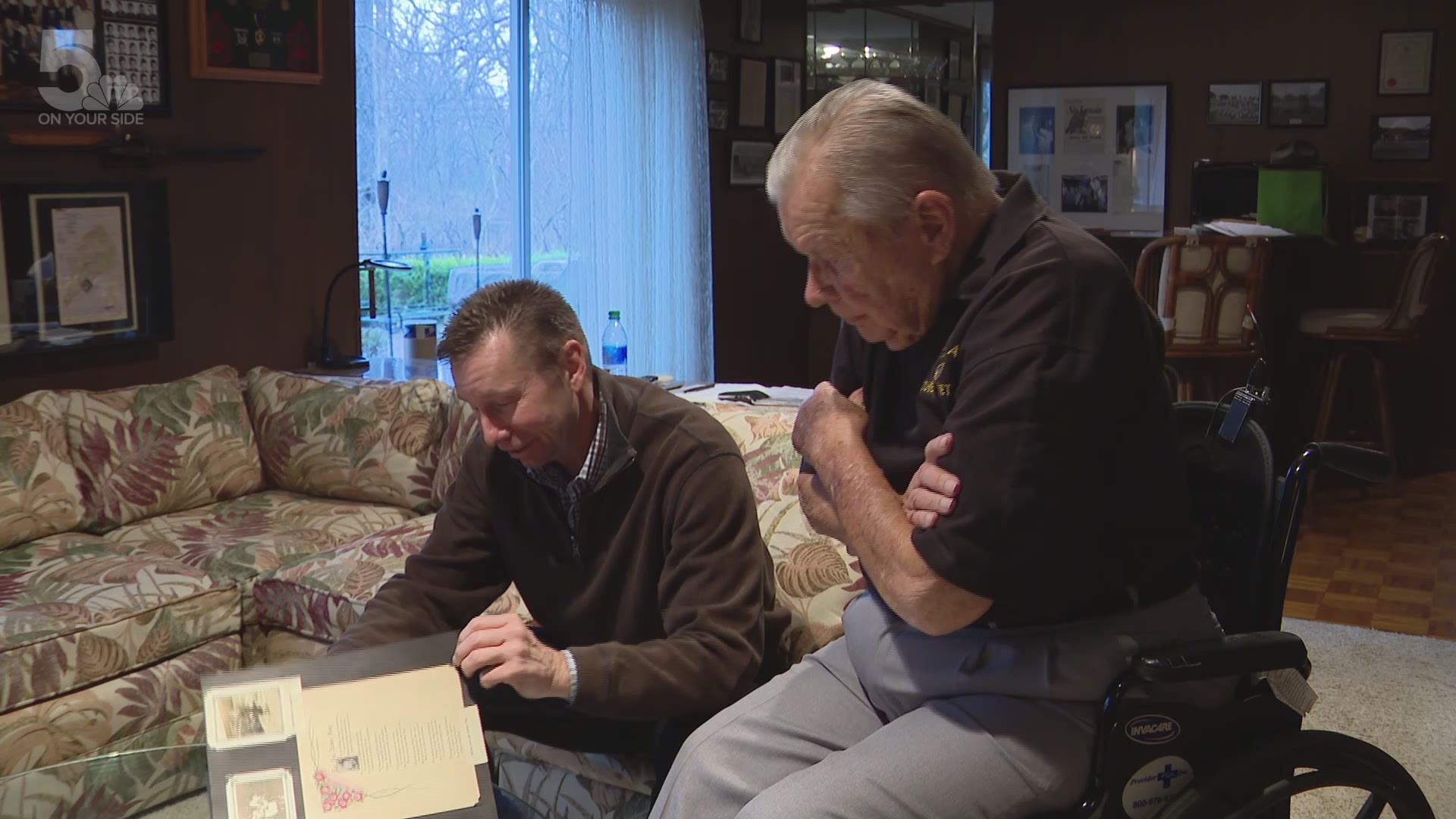 WARSON WOODS, Mo. — When you are nearly 99 years old, memories can be fragile.

So, like a museum curator, Keith Kohler is helping his dad catalog his collectibles. After all, Charlie Kohler is written on the pages of history.

He was a promising ballplayer signed by the Brooklyn Dodgers out of high school.

However, life changed for him on Dec. 7, 1941, when he and his friend heard a bulletin on the radio.

"The first thing we heard is that the Japanese bombed Pearl Harbor," recalls Charlie Kohler.

"We looked at each other and I said 'What are you going to do?' He said, 'We're going to have to fight.'"

He signed up with the Marines and was sent to the Pacific. And in 1945, he was part of the American invasion on the island of Iwo Jima.

"I knew it was going to be a tough battle," said Kohler, "because they had the advantage of higher ground."

The Japanese had built a dense network of bunkers and hidden artillery positions.

The battle turned into some of the fiercest and bloodiest of World War II. Charlie was just 23 at the time.

Just hours after landing on the beach, the young Gunnery sergeant was badly wounded when the bunker he was in was hit by a mortar shell.

"You just know right away when you're hit," he told us. "There's an explosion and you feel it."

Bleeding and unable to walk, he crawled back to the beach and was eventually transported to a hospital ship.

Days later, as medics looked after him, he looked out and saw one of the most enduring images of World War II. It was the flag-raising on Mount Sirabachi.

"It wasn't quite up yet when I looked up, it was way back here and all the guys were coming up with it. You can't believe what the noise was on board that ship," Kohler remembered.

The cheers were premature. The fighting lasted another 31 days.

Charlie would spend the next year in the hospital with two badly mangled legs.

After returning home, he married his sweetheart Juanita, raised three boys and built a successful printing business. But he almost never talked about the war.

"Only when I asked," said his son Keith. "I needed to kind of prompt him for any information."

One reason for that?  He made off Iwo Jima but his younger brother did not. Edwin was one of the nearly 7,000 Marines who made the ultimate sacrifice to take the island.

Charlie still has the telegram the Western Union man brought to his parents' door. A painful memory.

"It really was, that really takes a lot out of you," he told us.

Charlie Kohler still has the scars from the battle of Iwo Jima, even though it happened 75 years ago this month.

"It makes me pause and think about all these men, all these brave, courageous people who voluntarily chose to go fight for our freedom," said Keith.

It's a reminder that even reluctant heroes are still heroes. 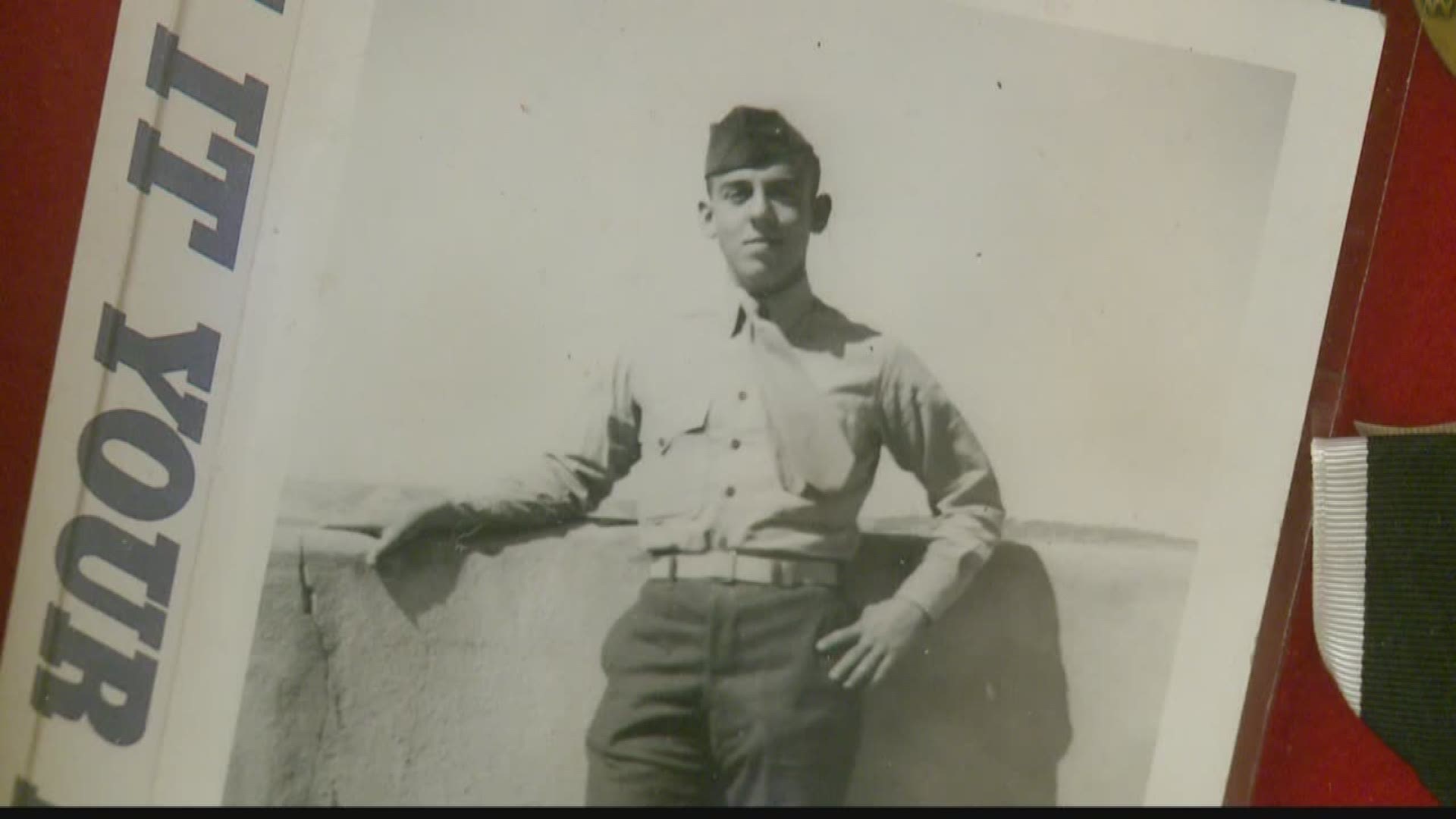 RELATED: 72 years later, WWII veteran looks back on the Battle of Iwo Jima