St. Louisan Markey Culver started the Women's Bakery as a volunteer for the Peace Corps and now is making a difference for women in Rwanda and other countries. 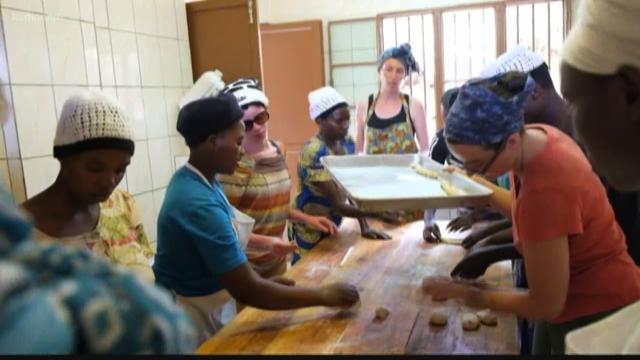 KIGALI, Rwanda – When she speaks to groups, Markey Culver always gives us her daily bread.

"When I look at this loaf of bread, this simple loaf of bread," she told an audience in October, "I see power. Power to change the world."

She's learned first-hand that when baking, sometimes need isn't spelled with a "k".

The 32-year-old St. Louisan is just back from Rwanda where she has spent the better part of the last seven years. It started when she volunteered for the Peace Corps.

"Markey has always been interested in helping others," her mom Joan told us. "She feels that she has been given a lot and therefore she needs to return that to the community whatever the community is."

But Markey admits to having second thoughts.

But she wiped away her tears and fears and threw herself into her work.

"Mine was teaching English as a foreign language," she told us.

She'd spend the morning in a classroom with kids and then lunchtime in her kitchen with their moms. Then one day, came the ingredients for a new idea.

That gave rise to the Women's Bakery.

"The Women's Bakery is a social enterprise that educates women and builds bakeries in East Africa," Culver explained.

Markey and her team train women to source local ingredients and sell nutritious breads in their communities. It's been both a combatant for malnutrition and a catalyst for economic development.

As a country, Rwanda has been a model for progress and reconciliation for the past 20 years. Still, more than half the population lives on less than $1.25 a day.

The women who work with Markey however, have quintupled their income and have surpassed her knowledge of bread making.

Since it started, the Women's Bakery team has trained more than 80 women and opened six stores.

Markey's mom got to see it for herself.

"To me, it was looking at the confidence in the women's faces," she told us. "They were so proud of what they did and they were putting out a good product."

That's a recipe for success that might see the Women's Bakery expanding to South America and other places around the world.

"I feel there's a whole lot more work to be done," Culver said.

Markey Culver. One woman who believes like bread itself, we rise by lifting others.

For more information about the Women's Bakery, click here.