Police said it happened Wednesday evening at a Cricket Wireless store in Dellwood. 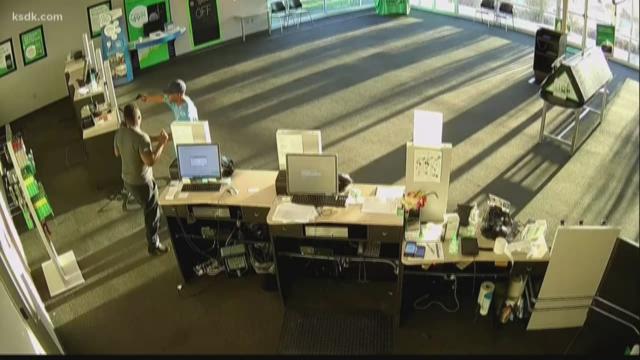 ST. LOUIS — A cell phone store worker shared his terrifying story after he was held up while working, and the entire incident was captured on surveillance footage.

Police said it happened Wednesday evening at a Cricket Wireless store in Dellwood.

Germont Cannon was the only employee working inside the store at the time of the robbery. Cannon said he thought he was servicing a regular customer until things turned violent and he found himself staring at the barrel of a gun.

"It was an unfortunate situation and its traumatizing. I was doing my count down waiting to get off at 8 o clock when it happened,” Cannon said.

However, while he was attempting to help a customer get cell phone service the unthinkable happened, and he almost lost his life.

"After I gave him the phone back he was like okay have a nice day. Then before I knew it he put a pistol in my face and told me to give everything to him," Cannon said.

The surveillance footage showed that man putting a gun in Cannon's face before making him get on the ground. Cannon said he hasn’t been able to stop that image from replaying in his head.

“The guy put the gun right there on my neck he told me to give me everything and I opened the register for him I said take it all just don't kill me. It hurts, it’s like every time I close my eyes all I see is him putting a gun in my face," Cannon said.

The video footage also showed that man leaving with an unknown amount cash he collected from the register. Police are now looking for the person responsible, but Cannon said his life will never be same after staring death in the face.

"A gun in my face, that's something I never, I've never experienced. All I kept thinking about when I was in the bed like what if he did shoot,” Cannon said.

Cannon was the only employee working in the store when this incident happened. He has since left but moving forward he's hoping to see more security for the employees who still work there.

The corporate office said they were unable to comment on the security issues considering this incident is still under investigation.