'Where's the care for our military?': Marine veteran stranded in Alton after being kicked off Amtrak train

Karl McKeehan said he was transporting his service dog to Austin when Amtrak called the police and kicked him off the train. Amtrak said it wasn't a service dog 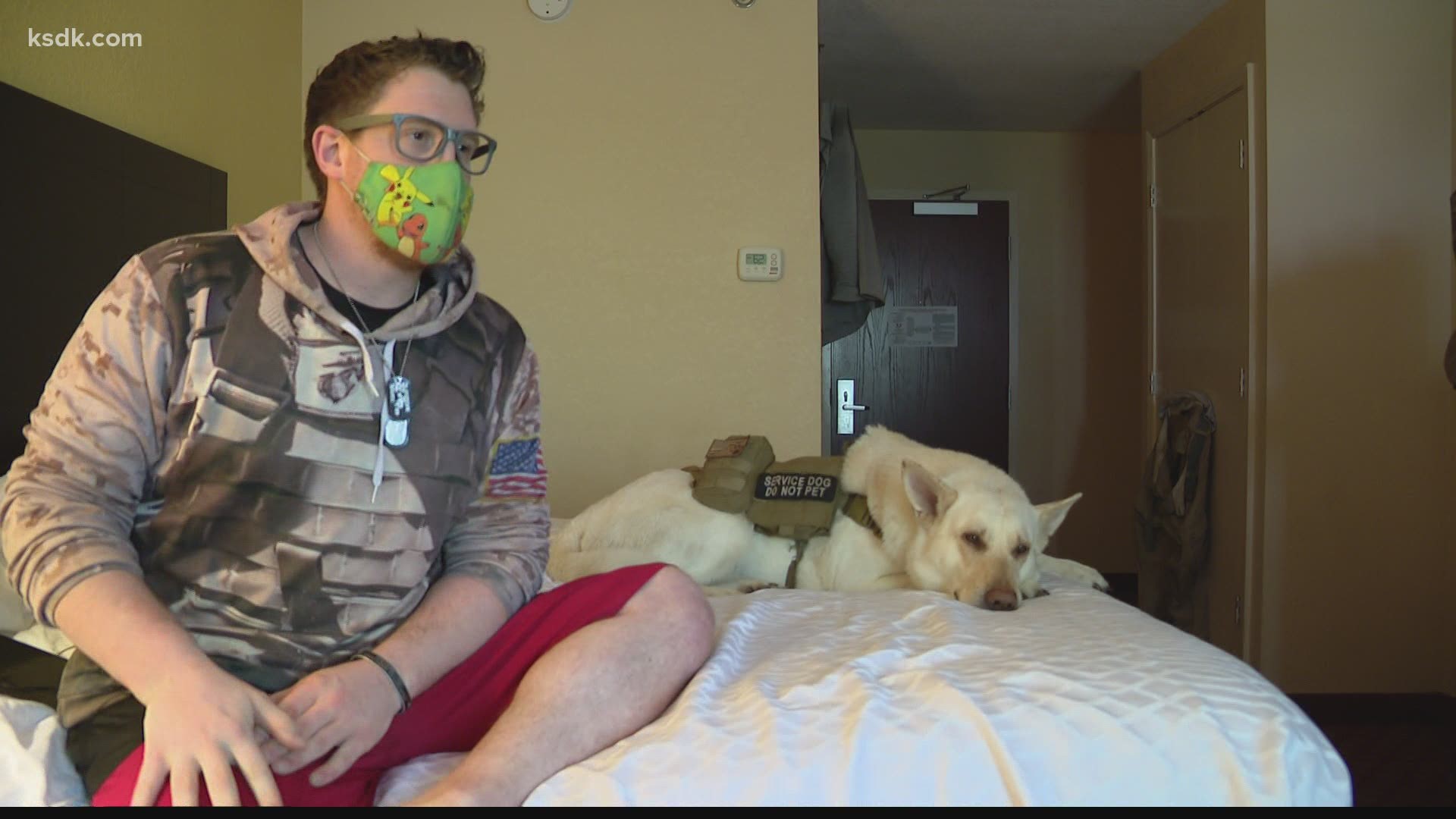 ALTON, Ill. — Sunday night was the first and probably last Amtrak train ride for canine PJ and his handler, Marine veteran Karl McKeehan. McKeehan said the two were on their way to Austin from Detroit for a reserve training.

"I'm taking him down to training," said McKeehan. "But I'm part of the training as well because I've been his handler."

McKeehan became PJ's handler when they were in Afghanistan. McKeehan said he did three tours there and is now a wounded veteran. He boarded Amtrak in Detroit without issue. He said he hit Chicago and had a snag with showing proof that PJ was indeed a service animal. He had to stay the night unexpectedly in a hotel to catch the train the next day.

Hours into his trip on the Chicago route, he said the police were called and he got escorted off the train. He said it was completely baffling. Karl recorded the deboarding with his GoPro camera, which he wore on his hat.

McKeehan said he and his canine were seated the entire time together, except once when McKeehan had to use the restroom. He said it's not normal, but he did ask the passenger next to him to watch the canine, a light-colored German shepherd. He said the lavatories were too small to take PJ with him, but just like on planes, McKeehan could leave the canine behind at the seat — he was trained to stay behind.

"They saw me not with him, and that's where it all came from, I suppose," said McKeehan.

An Amtrak spokesperson says McKeehan's dog was wandering the train, which McKeehan refutes. But Amtrak also said the canine is not a service dog. Instead, the company said PJ was an emotional support animal, which is not allowed. The Marine veteran said they've got it all wrong.

"He's both," said McKeehan. "For my medical reasons, he helps me alert me when I need to take medication."

Even other Amtrak workers and Alton police officers seemed puzzled as to why McKeehan was kicked off the train and stranded in the Illinois city. On his GoPro video, an Amtrak worker says something like, "You did not hear this from me, but if they let you on in Detroit, and they let you on in Chicago, I don't know what the thing was."

Even two police officers said on the video footage that they felt it was not fair, and that it's not every day they get calls that shock them.

As the footage continues, McKeehan kept his cool, but he said this event felt discriminatory and frustrating. He said at one point an Amtrak employee asked him about his medical condition, which McKeehan thought was too much.

"Where's the care for our military?" asked McKeehan. "It hurts to feel treated like this."

Amtrak clearly states its animal policy on its website, and that includes rules for small pets and service animals. Ultimately it is a business and can run its own rules. McKeehan says he had to call some Marine buddies from Texas to pick him up. He was on his way down to training as of Tuesday morning.

The Americans with Disabilities Act defines a service dog as one that performs a specific action when needed, like a dog trained to alert a person with diabetes when their blood sugar reaches high or low levels. A service dog can also be trained to detect the onset of a seizure in a person who has epilepsy. The ADA also states that in situations where it is not obvious that the dog is a service animal, staff may ask only two specific questions: (1) is the dog a service animal required because of a disability? and (2) what work or task has the dog been trained to perform? Staff are not allowed to request any documentation for the dog, require that the dog demonstrate its task, or inquire about the nature of the person's disability.