"I have a 1-year-old baby ... I just can't imagine if we were in the house," the homeowner said, holding back tears. "I had no idea the magnitude of what happened." 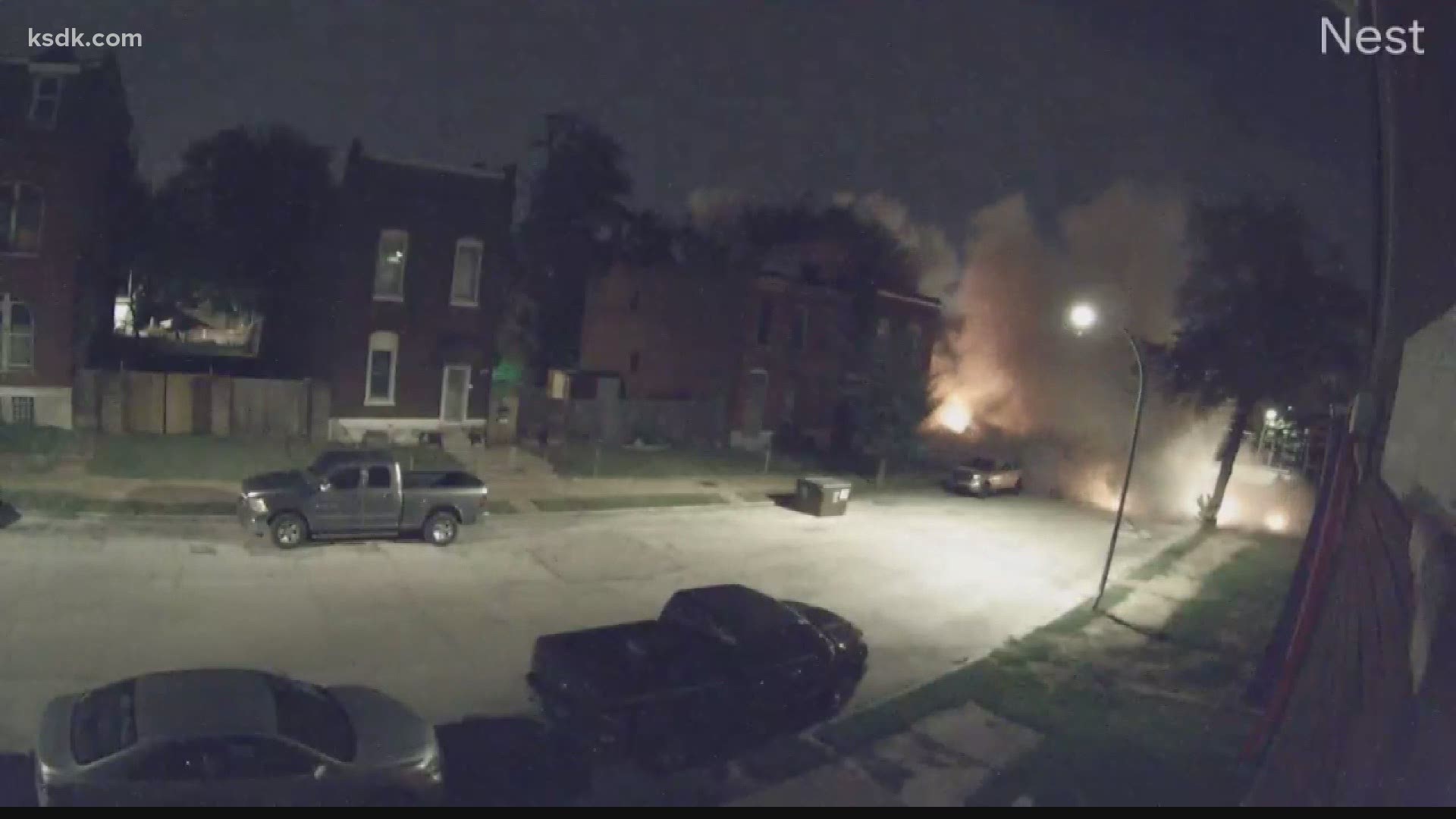 ST. LOUIS — Firefighters sifted through what was left behind after a house exploded late Tuesday night.

St. Louis Fire Department crews responded at about 10:45 p.m. to the 1100 block of Newhouse Avenue, which is in the north city neighborhood of Hyde Park. Firefighters arrived to find a two-story home leveled.

Fire and smoke were still coming from the house and a home next door also was on fire. Everyone in the home next door made it out safely. Firefighters and the K-9 search and rescue team responded to the scene to look through the rubble of the house that exploded.

Firefighters said the blast was powerful.

“Window casing, bricks and a portable A/C unit violently ejected during the explosion,” the fire department wrote on Twitter, sharing a video from the scene that showed what’s left of the house and items scattered across the front yard.

A Nest surveillance video from down the street showed the moment the house exploded. A large flash of light is seen along with a loud boom, following by a ripple of fire throughout the building. Flames, smoke and dust filled the air.

You can watch the full surveillance video provided by the fire department below:

Rochelle Merollis told 5 On Your Side she, her fiance and their baby weren't home at the time. She said they just got the keys to a new house and spent the night there. Merollis said she found out about the explosion from a friend who saw it on the news.

"I have a 1-year-old baby ... I just can't imagine if we were in the house," Merollis said holding back tears. "I had no idea the magnitude of what happened here until I pulled up."

Merollis said she has no idea what could have caused the explosion.

The woman who lives in the house next door said she was trying to sleep when she heard a loud boom. She said her security camera went black. So, she stepped outside and almost fell because her back porch was gone.

“Thank God I made it outside because I couldn’t get back in to get anything,” Verneta Haughton said.

Haughton said she lost everything in the explosion of her neighbor’s house.

The single mom of three says her children weren't home at the time.

Another neighbor who lives down the street is trying to assist Haughton and help her rebuild.

"She’s working too hard to do the right thing, I’ve seen it that’s why I am here for her," she said. "I want to see her in a stable place and make sure she is okay. Let’s not let this be another storyline where we forget about her. I know there are  other things going on in our metropolitan region and we have so much to deal with, but this family deserves this."

Fire investigators responded to the scene and are working to figure out what caused the blast.

A GoFundMe has been set up to help Haughton. Those who would like to donate can click here. You can also send donations to the Cash App account: $VernetaHaughton1979