One police chaplain got on the megaphone speaker and said, "We are out here to be with you. We mourn with you and we want to be apart of the voice here tonight." 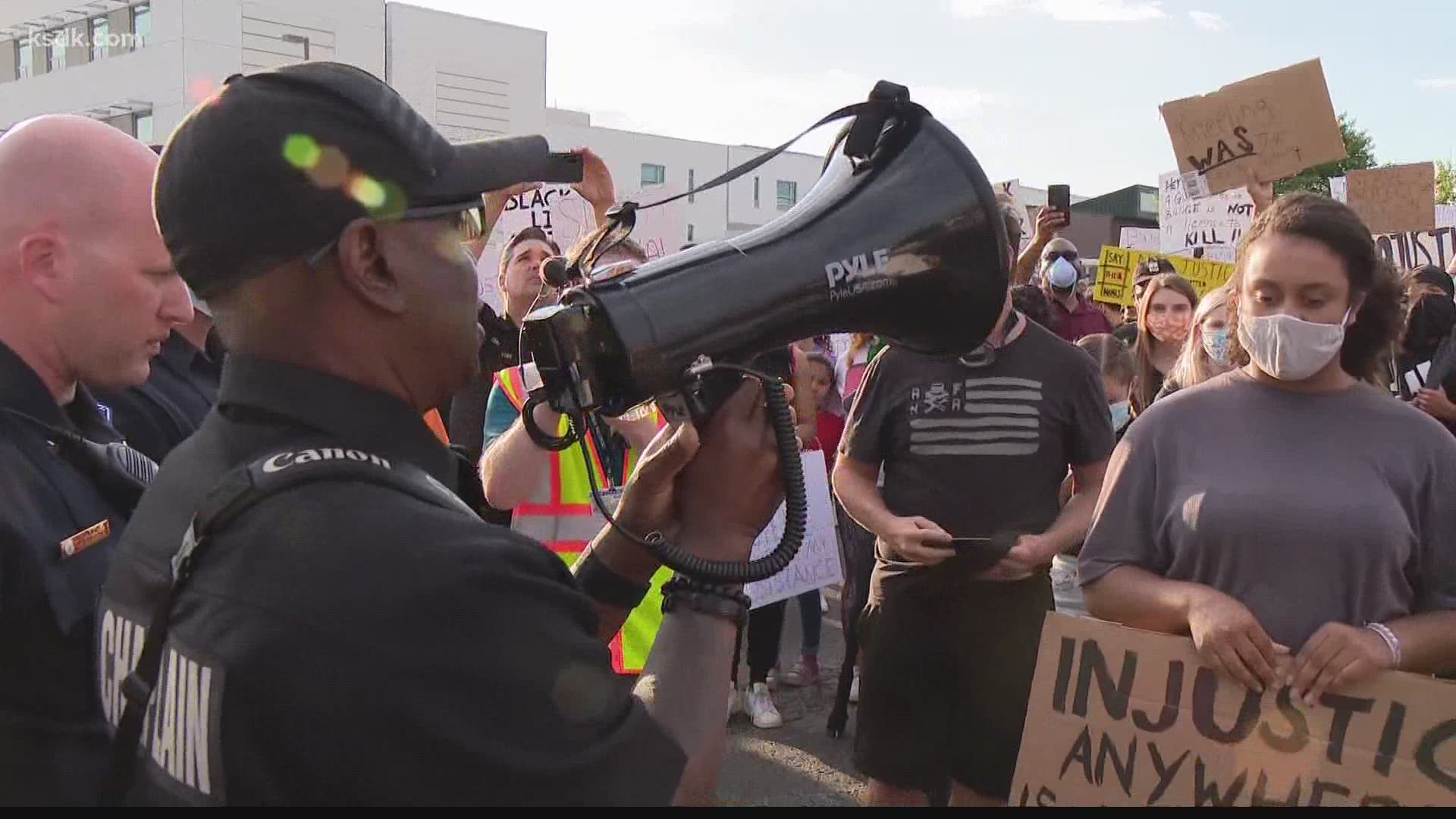 O'FALLON, Mo. — Across the country and in St. Louis, hundreds of protesters took to the streets Monday chanting 'George Floyd' and 'Black Lives Matter'.

In O'Fallon, Missouri, demonstrators held their signs high, with their voices mirroring the messages imprinted on the posters.

Hundreds of demonstrators — including teenagers — marched peacefully in solidarity. Altogether, police estimated about 1,500 to 2,000 people participated.

The organizer, Ryan Staples, just graduated from Fort Zumwalt West High School and is excited to go to Saint Louis University in the fall to study political science. His career goal is to become a civil rights attorney.

He was motivated to make a difference after hearing about the death of George Floyd and the unrest across the country.

Staples hoped his generation could help him spread their message through peace.

"We need a peaceful positive influence. So anyway I can help, that’s what I decided to do," Staples said. "All of us banding together shows the unification of young people. This is a peaceful protest."

One police chaplain got on the megaphone speaker and said, "We are out here to be with you. We mourn with you and we want to be apart of the voice here tonight."

Officers also blocked the road for hundreds to safely take over the streets.

At the front of the pack, officers including O'Fallon Police Chief Tim Clothier were arm-in-arm with the teenagers.

One of the officers among the crowd is the school resource officer who said many students and their families were there.

Staples said Chief Clothier was beyond helpful with the organization of their protest.

"Every question we had, he answered. He’s meeting all of our accommodations we asked from him," Staples said.

From Fort Zumwalt West, they walked up Mexico Road to Bryan Road to the City of O'Fallon Justice Center.

He said, they may be young, but they're experienced in the pain they've dealt with. And they just want that to be heard.

"Just listen. Listen to what we have to say because what you are going to hear is true pain and that true pain is deep rooted and it can change. And if you just listen, I do believe that change is coming," Staples said.

"We were able to work with the organizers of this event, and they continually expressed their interest in making this a peaceful demonstration. The O’Fallon Police Department worked to ensure the safe passage of the people marching, as well as ensuring our residents and business owners that we were present to keep them and their property safe. The march was peaceful and our officers were able to engage in worthwhile conversation with participants. No arrests were made and all roadways were opened without major delay."