'It can't stay like this, it just can't'; Ferguson protests turn violent with reports of shots fired, rocks and fireworks thrown at police 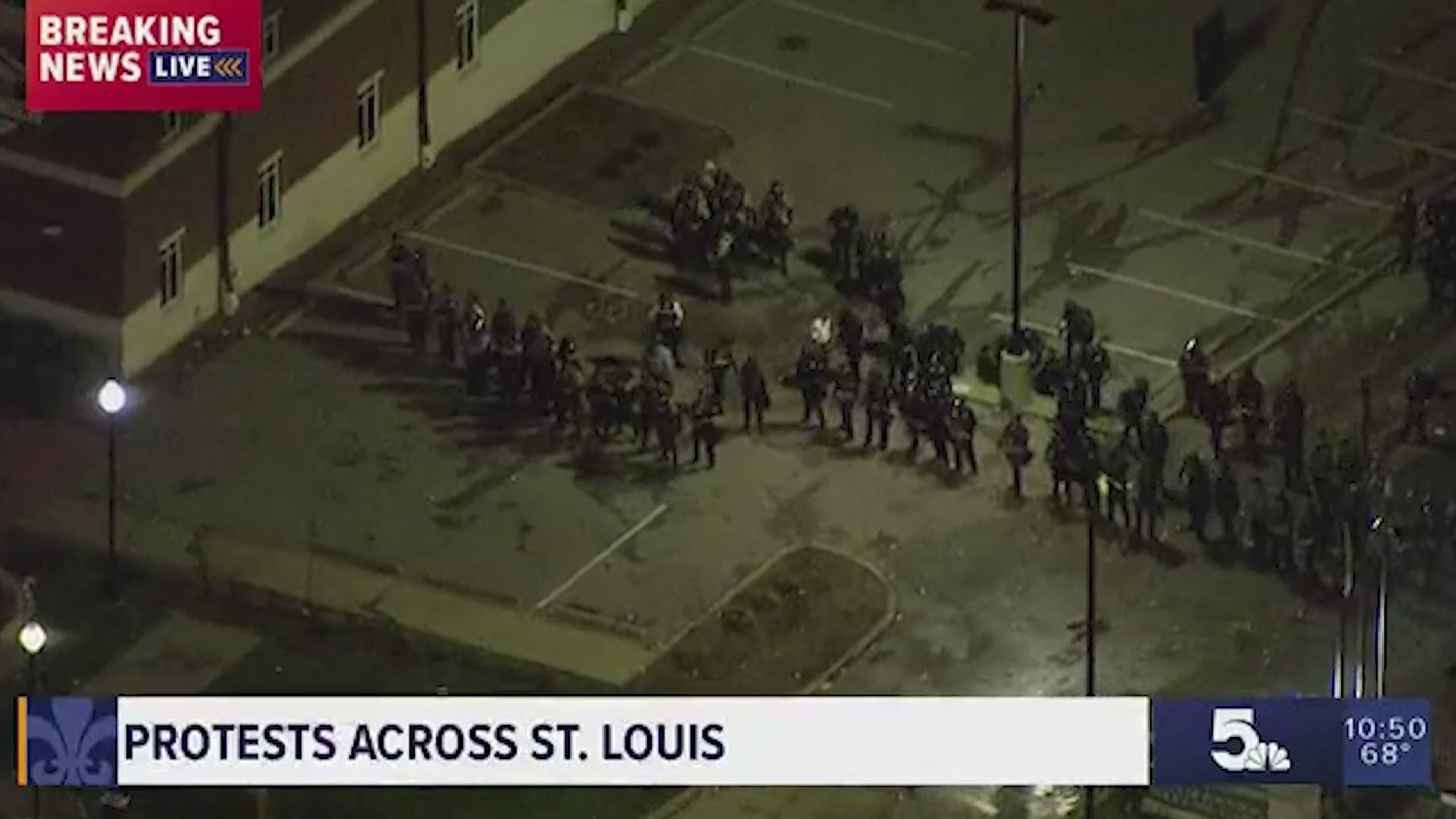 FERGUSON, Mo. — A midnight curfew did not stop crowds from protesting for about eight hours outside the Ferguson Police Department Saturday night over the death of George Floyd. The protests left seven officers injured, county police said. As of Sunday morning, no arrests had been made.

At 1 a.m., St. Louis County police confirmed there were reports of shots fired in the area of the protests. The St. Louis County Police Department confirmed Sunday morning that "a significant amount of gunfire" happened throughout the night in the area, and one of its police or fire vehicles had been damaged by a bullet.

While live on the air, repeated popping sounds could be heard in the audio from 5 On Your Side's crews. It was unclear whether the sounds were gunshots, fireworks or something else.

"Orders to disperse have been given numerous times due to an unlawful assembly. Protesters continue to throw fireworks and rocks. Now there are reports of shots fire," St. Louis County police tweeted. The county police department was on the scene helping Ferguson respond to the protests.

5 On Your Side's Casey Nolen reported if police were issuing orders like that "there will be arrests now or other means of forcing people to break this up."

Watch 5 On Your Side's full on-air coverage from Saturday night by clicking here.

At about the same time the popping sounds could be heard, Ferguson police officers wearing full riot gear left the parking lot where they had been standing arm-to-arm for hours. They rushed the crowd that was gathered across the street in an attempt to break up people who were gathered there.

"I was really scared last night, I'm used to walking late at night with my dog and saying hi to people so it's like what's changing? What's changing? And it just can't stay this way, it can't," said Ferguson Resident Bette Davis.

WATCH: Here's what it looked like as police clashed with protesters in Ferguson Saturday night

5 On Your Side's Robert Townsend reported that was the first time Ferguson police left the parking lot since the protests began outside the police station at about 6 p.m.

The mayor issued the curfew at about 11:40 p.m. Saturday. As the clock ticked past midnight, hundreds of protesters remained outside the Ferguson Police Department. It's unclear if the protesters knew about the curfew.

Just before 2 a.m., St. Louis County police said the crowds had dispersed and officers would remain on the scene to patrol the area throughout the night. Police have not said whether any arrests were made.

The demonstration had been mostly peaceful, but around 10:30 p.m. the mood shifted.

"I think it's unnecessary, they have a good reason for what they're protesting for and I totally agree with it and support it, and I'm sure many of the police officers do too. Keeping it peaceful shows more power, it's something Martin Luther King stood behind, I stand behind and something i think these protesters should stand behind," said cleanup volunteer Noor Alyasiry.

Shouts of "Black Lives Matter" could be heard throughout the crowd.

Tear gas and rubber bullets were used by police in attempts to control the crowds of protesters.

The county police department confirmed several people in the crowd shot off fireworks at officers and threw bricks, rocks and bottles at police.

A second tweet from St. Louis County police showed windows smashed in and a set of doors shattered. Police said all non-essential workers evacuated the building.

St. Louis County police shared a photo of the helmet one of the officers was wearing when they were hit in the head with a heavy object. The photo showed a large dent in the helmet.

At least 11 police and fire vehicles were also damaged. One of them was damaged by a bullet and the others were hit with rocks and debris.

Robert Townsend also witnessed protesters smashing the windows of Italian restaurant Vincenzos, which is next door to the Ferguson Police Department on South Florissant Road. He said looting had begun.

At about 12:30 a.m., while parked in front of Vincenzos, 5 On Your Side saw two protesters try to light what looked like a molotov cocktail on fire. While trying to get the item to ignite, a man ran up to the protesters and repeatedly yelled at them, "Not in my community!"

The men continued to try to light the device on fire for several minutes. Police then launched a tear gas canister at the men and the small crowd that was nearby.

RELATED: 'Not in my community!' | Onlooker confronts man attempting to light fire outside Ferguson business 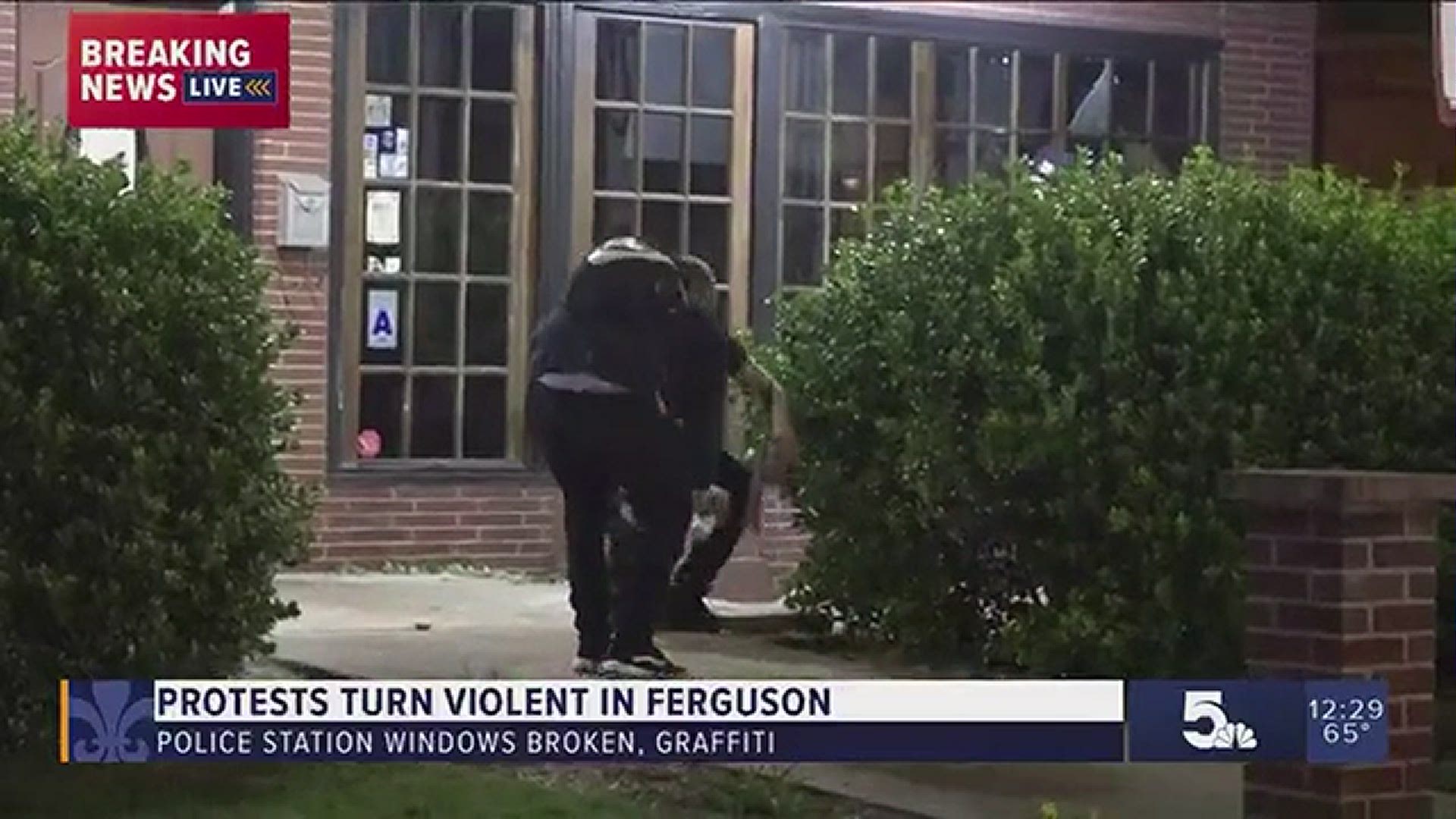 A couple hours earlier Saturday, Missouri Governor Mike Parson declared a state of emergency and activated the National Guard due to civil unrest from protests.

READ ALSO: Protests continue in the St. Louis area Saturday amid the death of George Floyd

Protests started at 3 p.m. Saturday in Clayton. A crowd marched down Forest Park Parkway and eventually ended up in University City.

As a note, 5 On Your Side's crews were in their vehicles while reporting from the scene. 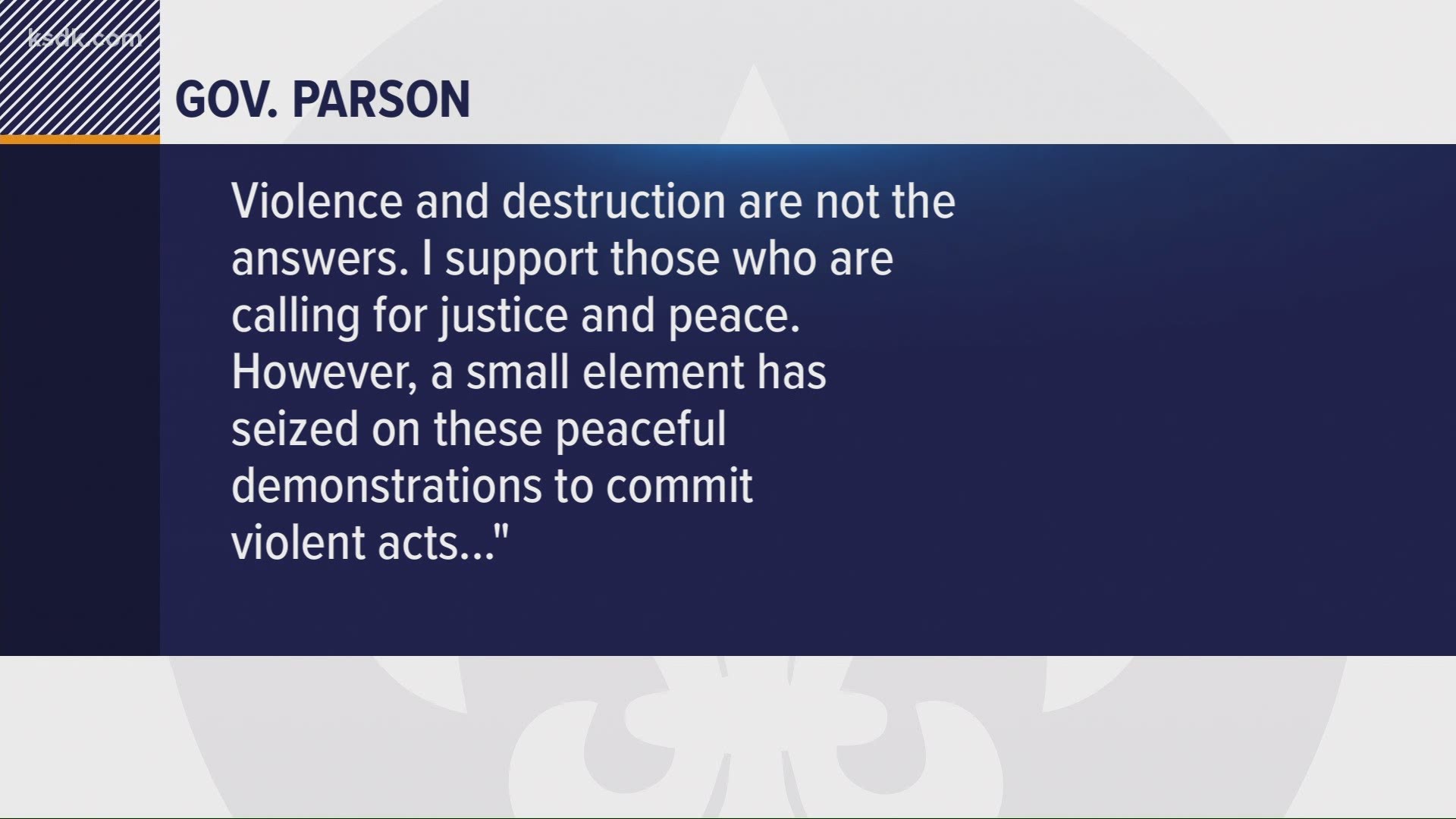