Since George Floyd was killed in Minneapolis, protests have occurred nightly in Portland for more than 70 days. 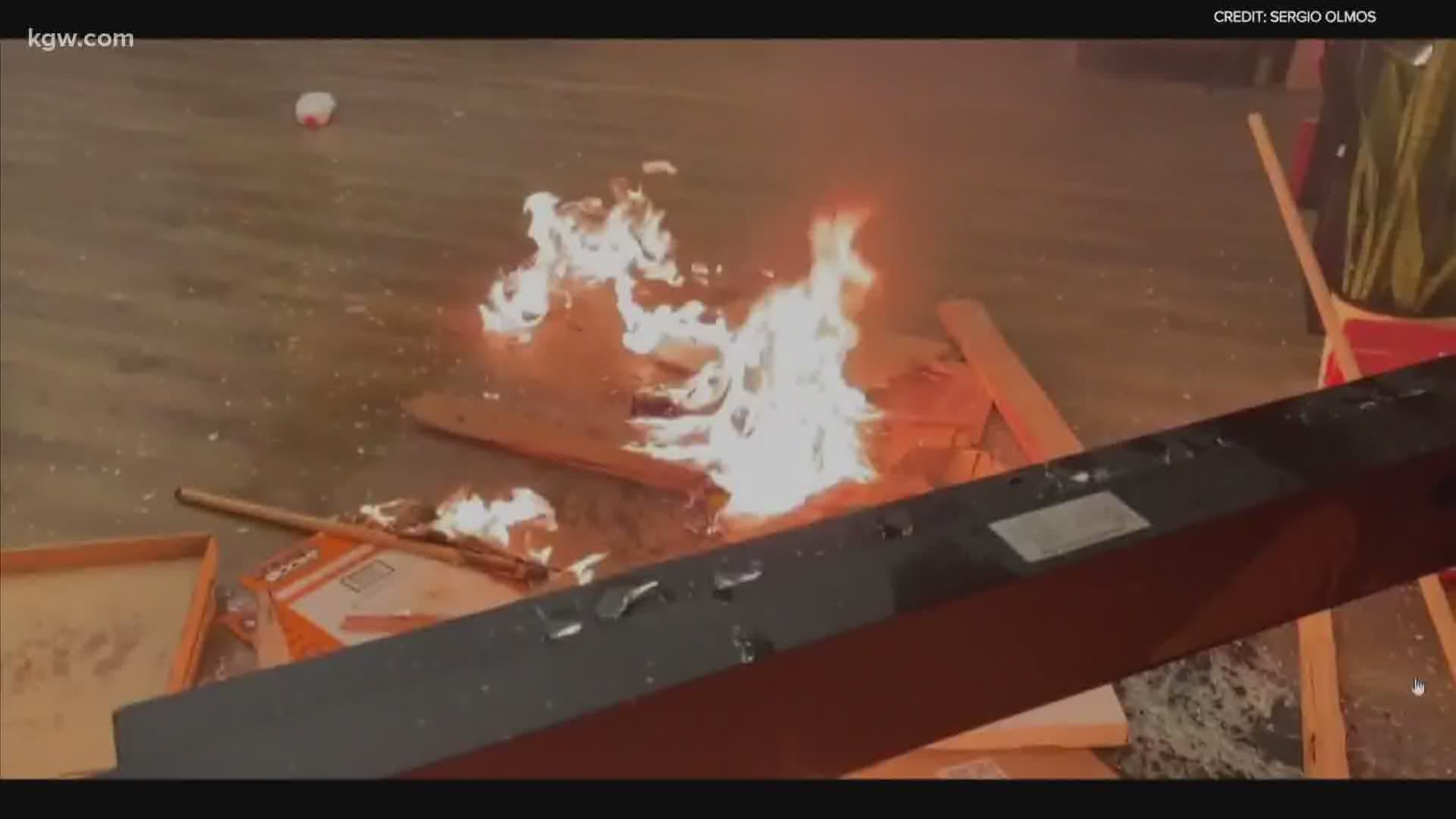 PORTLAND, Ore. — Protests calling for racial justice and police reform continued in Portland Saturday night into Sunday morning, as they have nightly over the 10 weeks since George Floyd was killed in Minneapolis on Memorial Day.

“All people, including members of the press and legal observers, must leave the area immediately by traveling to the north,” Portland Police tweeted.

All people, including members of the press and legal observers must leave the area immediately by traveling to the north.
Failure to adhere to this order may subject you to arrest, citation, or crowd control agents, including, but not limited to, tear gas and/or impact weapons.

Police said that the riot was declared after a group broke into the PPA building and lit a fire.

"This is a terribly dangerous situation," police tweeted. "Officers moved the crowd so the fire could be extinguished before it could grow out of control."

A riot was declared after a group broke into the @PPAVigil offices, started a fire, and continued to feed the fire more fuel. This is a terribly dangerous situation. Officers moved the crowd so the fire could be extinguished before it could grow out of control. https://t.co/GyBrgqcK0e

This comes after hundreds of people marched to the PPA headquarters on North Lombard Street near Campbell Avenue.

They were pushed north after the riot was declared, but some returned to the area shortly afterward. In a news release distributed early Sunday morning, Portland Police said a "hostile crowd" threw glass bottles and paint balloons at law enforcement.

The release says three officers were wounded in the ensuing scuffle. Two were taken to the hospital but later released. Several arrests were made as a result of the clash, but police did not release further information about how many or what charges the arrestees faced.

Portland Fire and Rescue was eventually able to put out the fire inside the PPA building.

Protestors used shields to stand against police and OSP pic.twitter.com/k3MSO8tInj

Early Sunday morning, a group that had been pushed back from the PPA building gathered at Kenton Park -- which is about a half mile away -- but police told them to also leave this area, saying failure to do so could lead to arrest.

Those in Kenton Park: This is a riot. The park is closed pursuant to Portland City Code. All people, including members of the press and legal observers must leave Kenton Park and the Kenton Neighborhood immediately. Cont..

The police union's headquarters has been the target of previous demonstrations, including one night when another small fire was set inside the building.

Portland police warned demonstrators that force will be used if they damage the building or engage in other criminal activity.

Reporters at the scene said less-lethal munitions were deployed by law enforcement. After the riot was declared, police were seen pushing over barriers to disperse the crowd.

One journalist was injured by less-lethal munitions deployed by officers.

Press person @sethdunlap was hit by a less lethal munition. He was on the ground and unresponsive for an agonizing number of seconds, during the chaos of the rush. pic.twitter.com/OhpOn3CD7q

Another video showed officers using mace as they pushed back the crowd of protesters.

Police also used flash bangs and billy clubs. In the release, the Portland Police Bureau claimed officers did not use tear gas.

Police and OSP disperse protestors out of the area using flahsbangs and billy clubs pic.twitter.com/LzMJhckZtw

Traffic was blocked around the union building during the demonstrations. Protesters turned over dumpsters in the street and set at least one fire before the riot was declared.

Credit: KGW
Dumpster on fire during protests outside the Portland police union building on Aug. 8, 2020.

Meanwhile, others danced and chanted across the street from the PPA building.

Crowds are assembled in front of the Portland Police Association building. The crowd is chanting. The #PortlandMoms are dancing to the rythm of the drums. #PortlandProtests #PDXProtests #BlackLivesMatter pic.twitter.com/z2xAoIEAfg

The crowd had largest dispersed by around 2:30 a.m.

The group began their march around 10 p.m. from Peninsula Park, which is a little more than a mile from the police union building. Before they marched, protesters listened to speakers who called for further defunding of the police and shared their experiences of what it's like to be Black in Portland, and the United States.

During Friday's protests, Portland police made 24 arrests as demonstrators gathered outside the Multnomah County Sheriff's Office on East Burnside. Portland police said an Oregon State Police trooper was struck in the head by a large rock and suffered a head injury.

Also during the overnight demonstration, at nearby Laurelhurst Park, police received a report that someone threw explosive devices at protesters. Photos and videos were later posted on social media showing what appears to be an explosive device and explosion in the park, police said. The bureau is investigating.

The president continued his bashing of Portland on Friday night, saying the city is a "disaster," while also citing a comment Wheeler made earlier in the week, accusing demonstrators of attempted murder for destructive acts at the Portland Police Bureau's East Precinct.