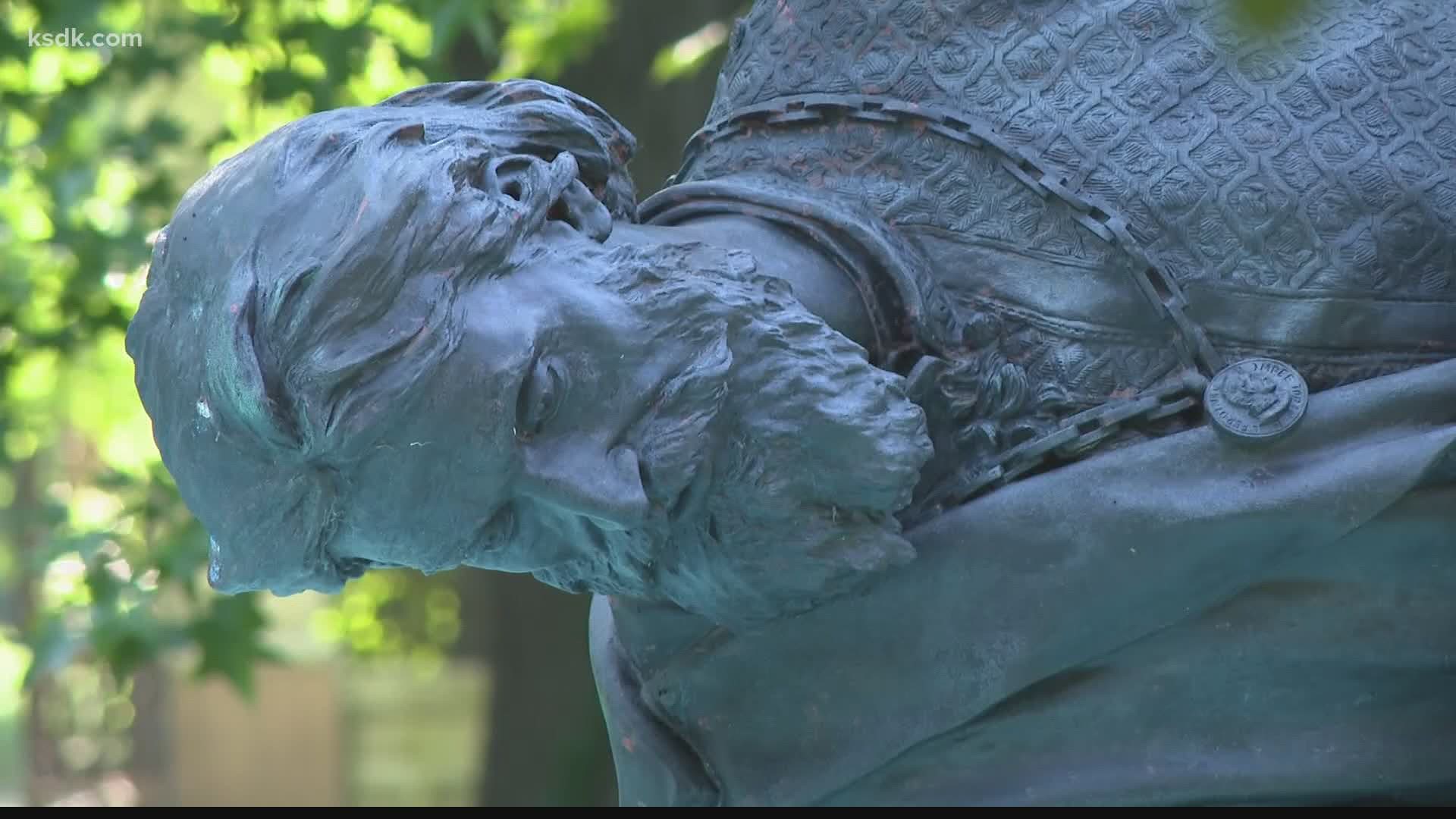 ST. LOUIS — It’s bigger than all of us: the statue of Christopher Columbus that’s now removed from Tower Grove Park, as well as the message sent by removing it.

“Toppling a monument is sort of the ultimate statement that change is on the way and that we as a society are looking backwards and saying we’re not the same,” said Warren Rosenblum, professor of history and political science at Webster University.

The statue is gone after surviving vandalism and calls for its removal as recently as 2018. Columbus statues around the country have met similar — in some cases, more grisly — fates in recent weeks as they were vandalized, toppled and even beheaded.

Statues of Columbus began popping in the 1800s when Italians sought to prop up the “discoverer of America” as a model Italian man, staking their claim to America, too.

“A lot of these monuments were created by ethnic groups kind of asserting their place in American society, kind of declaring their arrival,” Rosenblum explained. "It’s important to think about the fact that Italian-Americans were horribly discriminated against for a long time, there was extreme anti-Catholic discrimination in American that welled up in different periods."

Most monuments around America were also erected in a 40-year period between the 1880s and 1920s when it was an inexpensive fad for cities building up, and different groups would take advantage of the trend.

“You can imagine when funds were raised for a statue like that, that this really did have a deep and lasting importance in a community where people had been discriminated against,” said Rosenblum.

Today, the explorer is known for his brutality just as much as the discoveries that groups sought to glorify.

In this moment of reckoning around the country, monuments to confederate heroes have also tumbled or been targets of vandalism, most of which were erected decades after the Civil War.

“I feel even more strongly that Confederate statues are a slap in the face to people trying to achieve racial justice today,” said Rosenblum. “And that has to do in part with when they were built: a lot of these Confederate statues were built at a time when Jim Crowe was either being reestablished or being reinforced and they were built, in part, as symbols, not just of the one group’s identity but as symbols of oppression and justification of further persecution.”

Is this history professor worried to see statues like these erased from public spaces? Yes, but not for the reason you might expect.

“You know, I worry a little bit that people might just forget, might just forget that there was a time where we could think about a figure like Columbus only in terms of his courageous, bold adventurism and not think of the dark side of his legacy. You know, what today seems so obvious to us,” he said. “People need to be reminded of the irony of history, of the fact that in past decades there were things that we just didn’t think about as we contemplated a public figure’s legacy.”

While he hopes that the “problematic past” of some historic figures won’t mean erasing them from the landscape of the city’s monuments and nomenclatures, he said when it comes to Columbus and Confederate statues, they’re better off taken down.

“In a moment of transition, in a moment where people are asserting themselves as a movement, they want to remove these monuments and really make a statement that this is a moment of change and this is asserting their place in history by removing what’s there and stating that they are not going to tolerate the glorification of things that they no longer see as valid.

“I think it’s very important that people today have the chance to put their stamp on history,” he said. “In some ways we are in a revolutionary moment and revolutions topple monuments.”