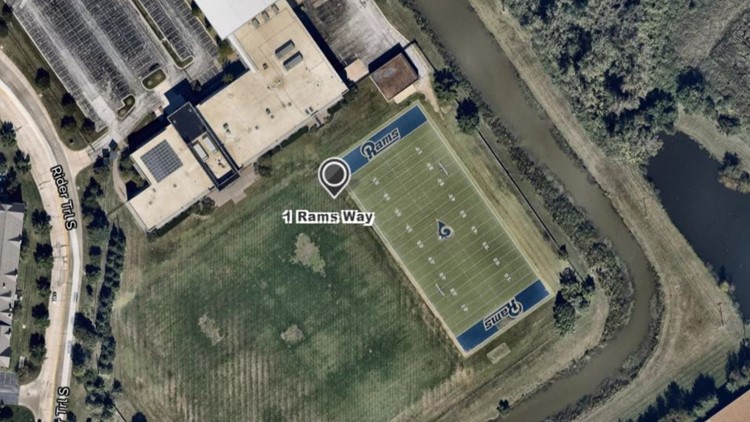 ‘Now that the Rams have gone away, it’s time for Rams Way to go away too’

ST. LOUIS COUNTY, Mo. — A street named after the Rams in St. Louis County may soon have a new name.

“Now that the Rams have gone away, it’s time for Rams Way to go away too,” Page said.

Innerpark Drive was changed to Rams Way by ordinance, approved by the St. Louis County Council on May 3, 1996.

The street was accepted for maintenance by the County on Sept. 11, 1997 and was officially added to the St. Louis County Arterial Road System on Nov. 13, 1998.

The former practice facility, now used by Lou Fusz Athletic, is owned by The Regional Convention and Sports Complex Authority.

“I support the move. It’s appropriate,” said James F. Shrewsbury, chairman of the Authority board. “We are focused on generating buzz for our new XFL team, our new Major League Soccer team and stadium and cheering on our Stanley Cup-winning Blues.”

“Although I had my own ideas for what the street should be called, on the advice of counsel and in the spirit of optimism, Athletic Way seems to be a more fitting name for the street,” County Executive Page said. In addition to soccer and lacrosse, the old Rams Park is now the practice facility for new XFL football team, the St. Louis BattleHawks.

“The Rams lost their way, landing in Los Angeles,” Page added. “Our preliminary numbers indicate that more people drive down Rams Way than attend Rams home games in Los Angeles. But I’d want to verify that before making an official statement.”

Page will ask the County Council on Friday to change the name.

RELATED: Man asks to see puppies, pulls out gun and steals them from woman in St. Louis