Schuncks is experiencing produce shortages in some of their stores, a spokesperson with the company said Monday night. 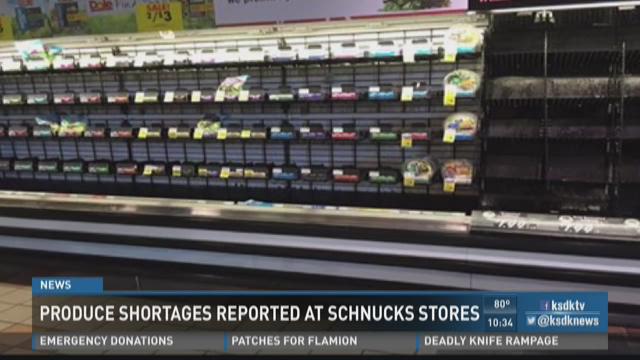 It's been a tough couple of days for some grocery shoppers to find fresh fruits and vegetables.

Shoppers across St. Louis have complained on social media about a produce shortage at several Schnucks stores.

The Schnucks on Jungermann Road in St. Peters is one of the many locations reportedly running low on produce.

Schnuck's customers and former employees in the area have mixed reaction to the shortage. Kim Nast has been a loyal Schnucks customer for more than for 30 years and knows exactly what she comes for.

"Just looking for some fruit to carry us over," Nast said.

Tuesday, while shopping in the Mid Rivers store in Petersburg, Nast discovered items on her grocery list were not on the shelves.

"They literally had two bananas on their shelves and that was it. The rest of the produce was hit and miss so I'm at this Schnuck's now seeing if they have any," Nast said.

Still, Nast and other customers remain loyal to the brand.

"I Usually have good prices and selection."

But unlike Nast, some frustrated shoppers took to Facebook posting photos like these from a Schnucks store in Dorsett where several produce shelves left bare.

Schnucks says the shortage comes from a power outage Sunday night along with a switch to a new warehouse. Schnuck's declined an on camera interview but wrote in a statement:

"Currently, stores are receiving fresh shipments for the items that are under or out-of-stock. We are working with our vendor partners to resolve this," the statement said.

The recent shortage comes three months after Schnuck's announced it would be laying off almost 200 employees from the Teamsters Local 688 Union.

"I don't know if an electric outage would cause this much of a shortage in their stores,” Michael Schlueter, Teamsters Local 688 Union.

Some former employees aren't buying the reasons the store is giving for the lack of items.

"When power goes out in storage or their warehouse, they pull this generator to a certain store, hook it up and within an hour, hour and half, they got their electric right back," Schlueter said.

Former union employees say the shortage is a result of the layoffs from the distribution center in Bridgeton.

Aside from the power outage, Schnucks insists the reason for the shortage is due to a busy weekend and their transition to their new warehouse.