Flamion and his wife said they want to display the boards in their new home, still under construction. However, they might keep a few of the displays at the Ballwin Police Department for officer and visitors to enjoy. 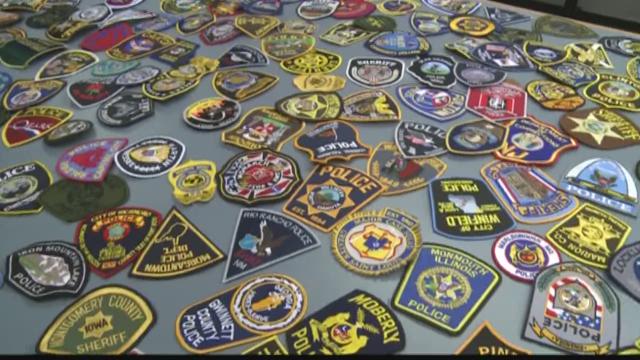 It was a tribute to an injured police officer.

Like many in his community Ramsey was stunned and saddened last summer, when a police officer in his community got hurt in the line of duty. Officer Mike Flamion was shot during a traffic stop. He survived, and continues his long road to recovery.

Ramsey, a sophomore at Parkway South High School, learned the Ballwin Police Department asked other departments to send patches and letters of encouragement to Flamion.

“The letters piled up and went to Flamion, and the patches went in a box,” he said.

“The box got fuller and fuller and fuller. And by the time I got my hands on it, the box had 1,363 patches from anywhere you can name across the United States, as well as exotic places overseas.”

Ramsey came up with a plan to preserve and display the patches, rather than keep them in a box. He raised money for his project, then partnered with TOC Artwork Framing and Design to build 15 different boards displaying all the patches. On Sunday, he presented the boards to Flamion and Ballwin Police.

“It shows just how much support that I had,” Flamion said. “It’s going to be nice to sit back and look at that on days that [I’m] just kind of bummed out or whatever, go look through the patches and realize I had so much support backing me.”

“I hope Mike got some extra strength and extra courage out of this project,” Ramsey said. “I hope that he can go home and enjoy these patches for the rest of his life.”

Flamion and his wife said they want to display the boards in their new home, still under construction. However, they might keep a few of the displays at the Ballwin Police Department for officer and visitors to enjoy.