Some readers say cartoon featured in Southeast Missourian is racist

The cartoon reads, "I have a dream that my four children will one day loot stores in Chicago and call it reparations." 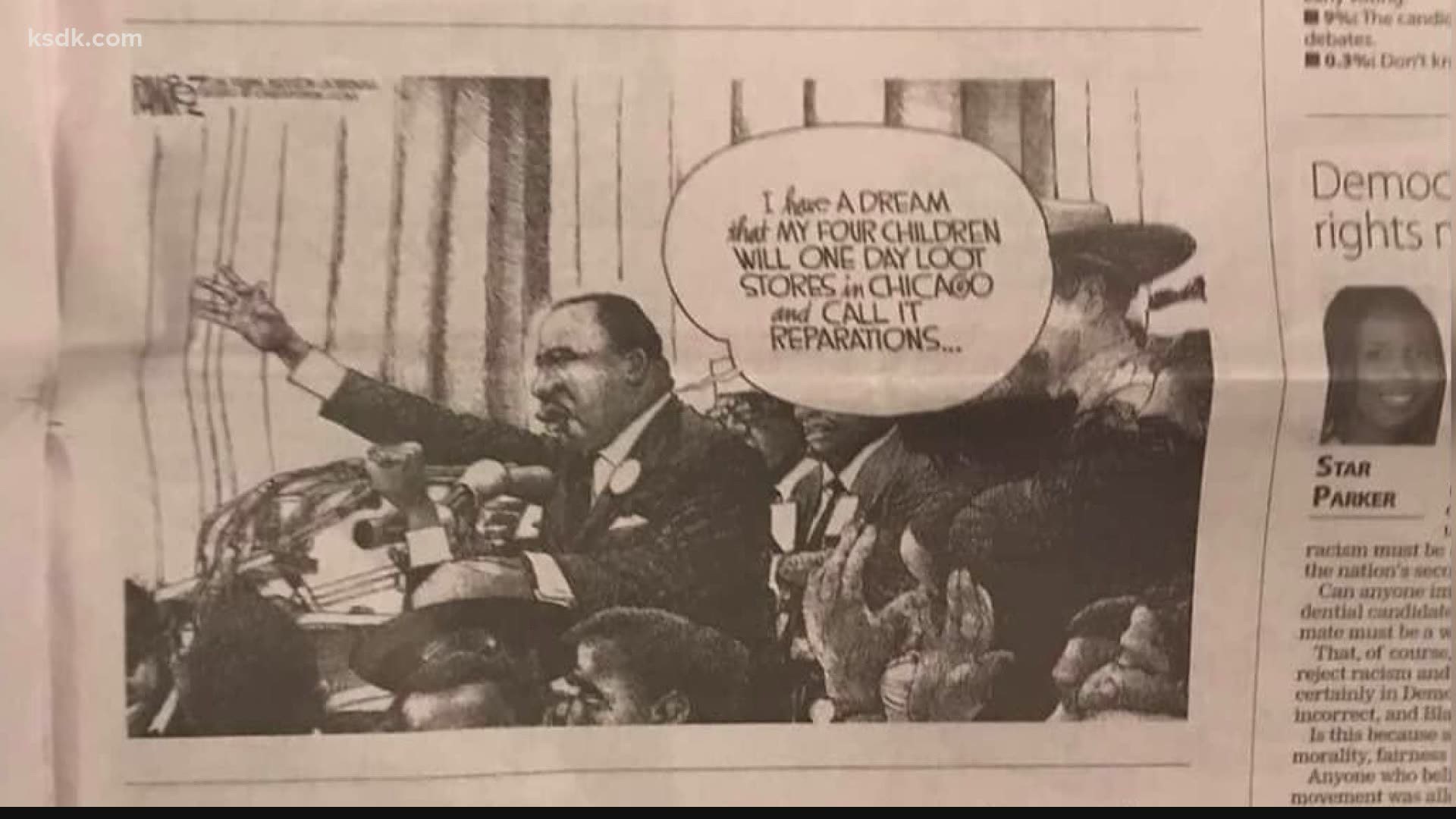 CAPE GIRARDEAU, Mo. — A political cartoonist put their spin on Martin Luther King Jr.'s I Have A Dream speech.

It was published in the Southeast Missourian and some readers are not too pleased with the paper for publishing it.

"Satire is meant for humor, but they're making light of something that's not meant to be made light about," said Nichole Holzum.

The cartoon depicts Martin Luther King Jr. with exaggerated facial features saying, "I have a dream that my four children will one day loot stores in Chicago and call it reparations."

"It's alarming and I was taken aback, I'm like it's 2020 do you know what's going on in the world right now, why are you publishing this," said Holzum.

Holzum is a native of Cape Girardaeu. She called the cartoon racist and its message disparaging.

"Context matters, the editor knew this, this was meant to pander to their audience, it seems intentional and not accidental," said Holzum.

Holzum says she contacted the editor directly. She says Jon Rust responded by sending this,

"Thank you for your note. The Southeast Missourian runs cartoons from a range of perspectives. Although we try to stay away from the most offensive cartoons — we do receive criticisms from all sides at different times. This particular one was created by a two-time Pulitzer Prize winning cartoonist, whose cartoons run in media outlets around the country. It is commenting on specific events, which National Public Radio among others has recently covered. "

Click to read the story from the National Public Radio

5 On Your Side reached out to Rust as well.

Thursday morning, the paper released an editorial response to the cartoon and the reactions it received.

"Many people didn't understand the context of the cartoon, which alluded to pro-looting words spoken by a Black Lives Matter organizer after recent riots in Chicago. Several thought it was an attack on Martin Luther King, Jr. ... The cartoon pointedly surfaces the question whether looting and violence are in the spirit of MLK's legacy," the note from the paper's Opinion Page management team read in part.

You can read paper's full response on the Southeast Missouri website.

The cartoonist, Michael Ramirez, is a two-time Pulitzer prize winner.

"The Southeast Missourian, this isn't their first instance of this type of behavior so I really do think its time to look within and start building a society of the paper, that supports a society moving forward," said Holzum.

The Southeast Missourian is the state's second largest newspaper.