"When I pulled it out and brandished it, he pushed the door open to run out," Cole said. 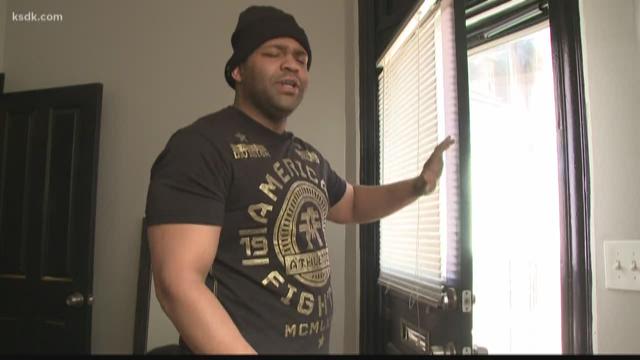 ST. LOUIS – A Soulard resident said a stranger barged his way into his house but the sight of his handgun scared the intruder away.

Rashon Cole is an operations engineer for a refinery in Wood River, Ill. He said he works a lot of overtime. However, on Saturday Feb. 17, he finally had some time off and decided to spend a night on the town.

"Spent the night in downtown then went to Uncle Bill's shortly after then got home about 4 a.m.," Cole said.

As soon as he got home, he rushed to the bathroom.

"That's when I heard the blinds on my door start to move," Cole said.

Cole knew he left the front door ajar, so he went back to investigate. Sure enough, a man was walking into his home.

"I asked, 'What are you doing?' He stared at me with a blank face and since he didn't move or didn't do anything, I turned back here and reached for my firearm and when I pulled it out and brandished it, he pushed the door open to run out," Cole said.

Cole said the man got into a dark green Chevrolet Suburban. He said he saw two other people in the car before it sped away.

Cole said while the man stood at the door, he was holding a white cup. He figures the man was drunk and wonders if he intended no harm.

However, he said it's not funny, considering the outcome could have been worse.

"Everybody knows in Missouri it's easy to get a registered gun, get a legal gun,” he said.

Now, he’s reminding his neighbors to lock their doors.

"Always be careful," Cole said. "Watch yourself. Even in your haste when you're running in the house. Maybe you have groceries or you're running to the bathroom. Make sure you lock your door. Even if you live in a safe neighborhood. You never know what could happen."