Finn, a 3-year-old Goldendoodle, is recovering from a collapsed lung and multiple punctures to his body after a buck attacked him. 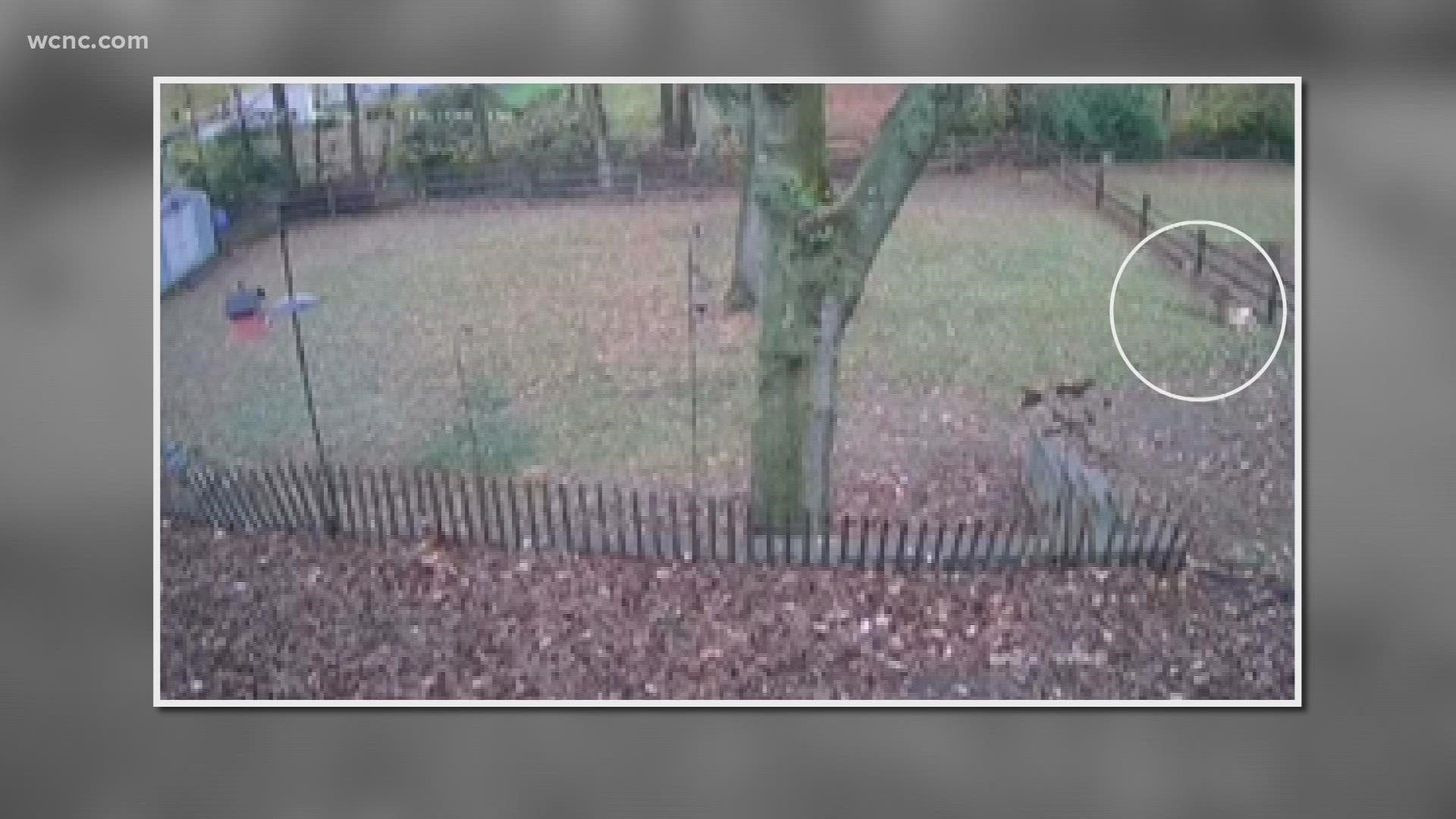 CHARLOTTE, N.C. — A south Charlotte family is warning other pet owners after their dog was seriously hurt when a deer attacked him in their backyard.

Finn, the family's 3-year-old Goldendoodle, usually plays in the backyard. He'll get spurts of energy and play fetch with balls and toys from time to time, his owner, Roger Hunter, said.

The Hunters live in a neighborhood between SouthPark and Pineville. They are used to seeing deer in their backyard, but they were stunned when Finn was attacked by a buck on Monday.

"We didn't expect it," Roger Hunter said. "This all happened so fast."

One of their security cameras captured the moment.

Editor's Note: The video contains content that some may find disturbing. 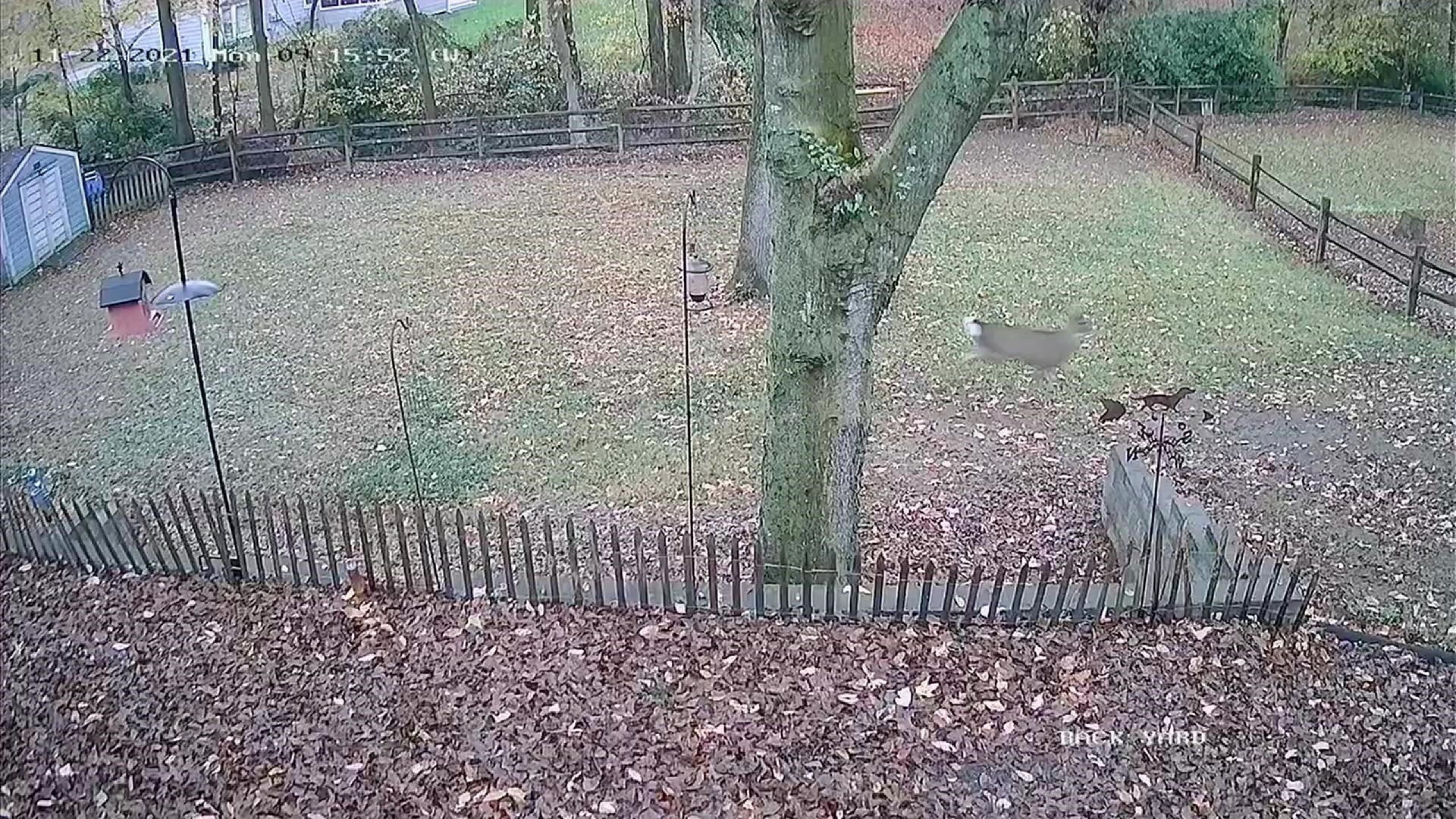 At first, Hunter said Finn scared off a doe from the yard. But as he turned around a buck met him head-on.

In the video, you can see a buck dart across the backyard towards Finn. Then, the deer pummels the dog over and over again with his antlers.

"[The deer] hit him about four different times -- pinning him against the fence each time," Hunter said.

Seconds later, Hunter's wife can be seen running into the video waving a towel to scare the deer away. Veterinarians credited Mrs. Hunter's quick actions with saving Finn's life.

Still, the damage had been done to Finn.

"It is very traumatic for her and the dog," Mr. Hunter said.

Tonight at 11 on @wcnc -- how this #Charlotte dog is doing after he was severely attacked by a buck in his own backyard.

We have the video... plus, what the owner believes led the buck to being so aggressive. pic.twitter.com/CooLjPioVS

"About seven or so, which were pretty deep," Hunter explained.

Hunter said he believes the buck got defensive after the dog tried to scare his doe away.

Deer are in the middle of their rut, or mating season, where bucks pursue does for mating.

However, he said with the ongoing rut, if something like this was going to happen, it would happen during this season.

"Even though deer are particularly bold this time of year, and some might be a little aggressive, we very rarely ever get reports of a deer coming after a dog," he said.

Bogges said any pet owner should be sure to not feed wild animals or nurture them to where they want to routinely come onto your property. Instead, respect their space so they don't become territorial.

The Hunters hope their story will make people aware so no other pet owner has to go through Finn's experience.

Finn's family provided an update on his condition Friday afternoon, saying Finn is doing much better and may be able to go home Saturday if all continues to improve.

Good news! Finn is doing much better and may be going home Saturday if all continues to improve, his family tells me. @wcnc

They sent me these pictures. One of him smiling and the other one showing his healing battle wounds. https://t.co/tM8valrgMA pic.twitter.com/crbLZZsDwS

RELATED: 'To me, it's social injustice' | Lyft repeatedly denying ride to Charlotte woman who is blind