St. Charles mom wants to end the use of 'isolation rooms' in schools

"I think the rooms need to go. They're not even rooms, they're padded closets like you would find in a prison. And that is not appropriate for a school." 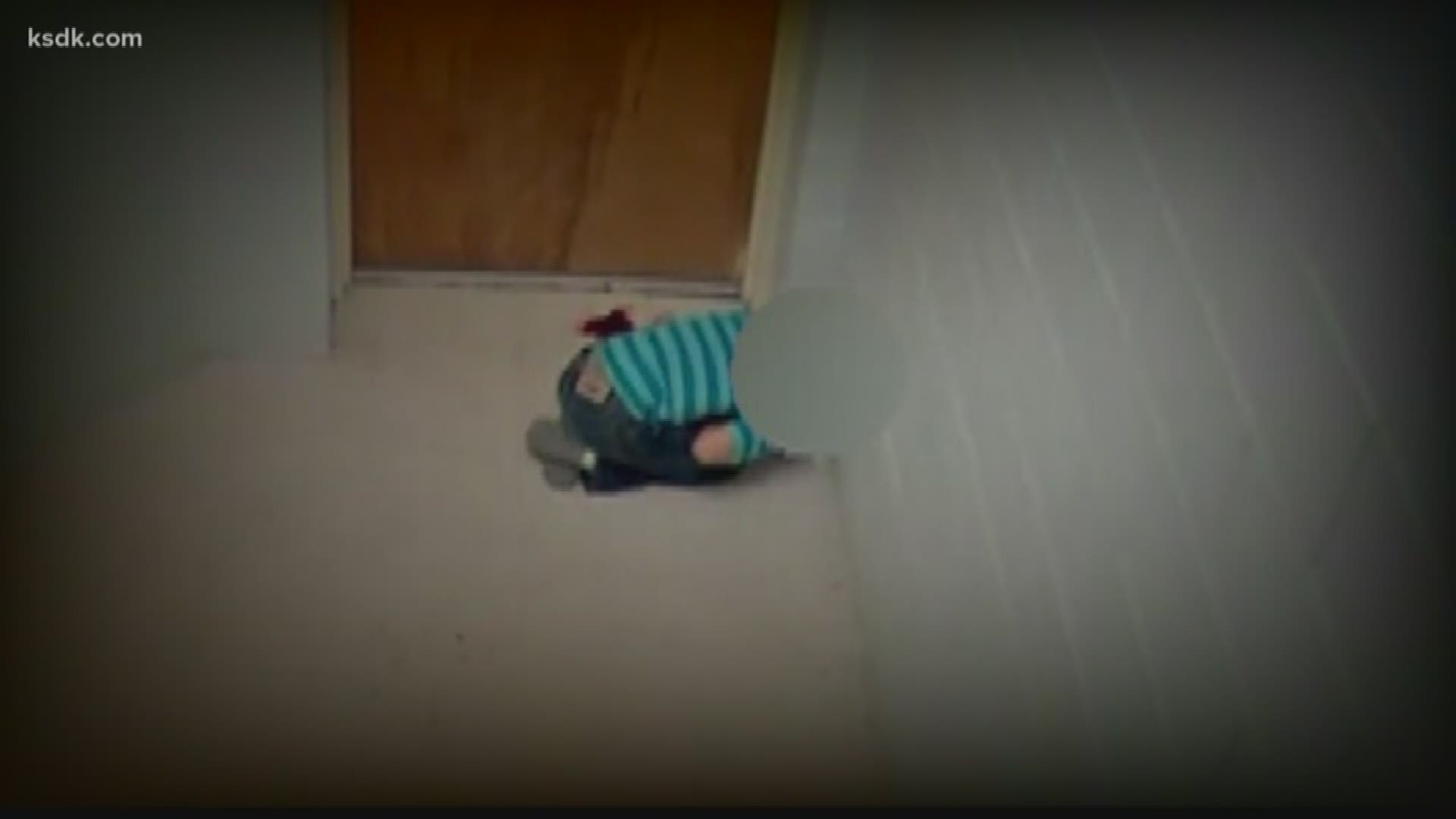 ST. CHARLES COUNTY, Mo. — Every day, you send your kids to school to learn and have fun, too.

But some children spend much of their school day in a small room, locked up away from their classmates and alone. We're talking about isolation rooms.

There's now a push in Congress to get the use of these rooms banned.

For one St. Charles mother that can't happen soon enough.

"People swear to me: 'There's no way that room exists.'"

But Tracy Bono knows all about isolation rooms. She found out about them from her son Frankie.

Bono said she was never told her son was being put in an isolation room. Frankie has difficulty communicating. But one day in 2017, he shared some troubling details about how he spent his day at school.

Kid's have a lot of names for it, but educators call them 'isolation rooms'.
They are typically padded, closet-sized spaces hidden away from other classrooms. It's a sort of solitary confinement for unruly or special needs student from high school students to kids as young as four.

Now more parents like Bono who've been exposed to these rooms say, they have to go.

"They are misusing these rooms. I think these rooms shouldn’t exist to begin with," said Bono.

Bono said the last time Frankie was in the one, a teacher held a gym mat over the door frame so he couldn't see anything. She said she got details when she confronted school staff.

"The teacher got quiet and said 'It actually got really bad at one point, he was crying for anyone. So I lowered the mat and reached my hand in and he held my hand for a bit and I think that made him feel better,'" said Bono.

Bono said she didn't receive any documentation from the school.

"Nobody was documenting how long he was in that room. I said 'I don't understand why there's no documentation.' She said 'Well because the door was open to the room. So since the door was open, you don't have to document he was closed in the room,'" said Bono. "He was terrified to go to school. He was in full panic."

"They don't want to say that they're really using those rooms," said Heather Lytle, Executive Director of Family Action and Community Training(FACT) — a nonprofit that helps parents with disabled children.

Lytle and her group say there are no construction standards to ensure isolation rooms are safe.

"Some are made of plywood. They're in a room where there's plywood dividers against the wall, plywood doors. Some are of cinderblock. Some are the size of closets," said Karen Cooper, also with FACT.

Under Missouri state guidelines, isolation rooms are supposed to be classroom or meeting sized rooms with the same type of lighting, ventilation and ceiling height as any other room in the school.

But even in the best cases, the FACT team said isolation takes its toll on children.

"They will display behaviors such as crying, being curled up in a fetal position. They may strip their clothing. They may soil themselves. Urination or defecation. Sometimes using that waste, smearing it in the room. Those are all desperate measures for a child to get out," said Kacee Machino, advocacy team lead at FACT.

After hearing Bono's story, we asked the Francis Howell school district to show us the isolation room at Warren elementary.

"We also have plexiglass in all the windows. Those were replaced after an incident a few years ago," said Will Vanderpool, director of alternative learning with the Francis Howell school district.

Vanderpool took us inside the room Bono says her son was kept in.

Vanderpool said every school in their district has an isolation room.

I-Team: Are you putting children in these rooms as a form of punishment?

"Absolutely not. We would never use this as a form of punishment. The only time this room would be used would be to make sure the child, the staff and other students are safe," said Vanderpool.

I-Team: Are you involved on that level? Are you in the classrooms where kids misbehave? How do you know?

"You're right. There are 19 buildings in the district. I do rely on the building administrator, counselors to follow policy.

And if they don't follow policy, don't count on any government agency to hold the district accountable.

Vanderpool said Francis Howell doesn't share data about isolation room use with the state or federal government and they're not required to.

I-Team: Do you think that's problematic? You're telling me you're following all the guidelines, but there is no way of verifying that.

"Correct, I do. I think it would be healthy in our system to have checks and balances. Every district is expected to follow the policy and expected to monitor themselves," said Vanderpool.

I-Team: can you see how being locked in a room like this could cause trauma to a student?

Vanderpool says workman's compensation claims within the district have gone up almost 50 percent in recent years. More than 120 claims were filed in the 2017-2018 school year.

Without the rooms, Dr. Vanderpool says staff would be forced to use restraint techniques on unmanageable students.

As for Frankie? Bono says the experience traumatized him so badly she pulled him out of Warren Elementary.

"We can't even drive by the school without him having a panic attack thinking about going to that school again," said Bono.

That was nearly two years ago. So why is she telling her story now?

"I think the rooms need to go. They're not even rooms, they're padded closets, they're isolation rooms like you would find in a prison. And that is not appropriate for a school," said Bono.

The Francis Howell School District claims they use isolation rooms around 150 times a year, but also say that that number is decreasing.

There are two bills in Congress right now that seek to ban the use of these rooms altogether. That effort is actually being led by a teen activist with autism who himself was traumatized by being in these rooms repeatedly.