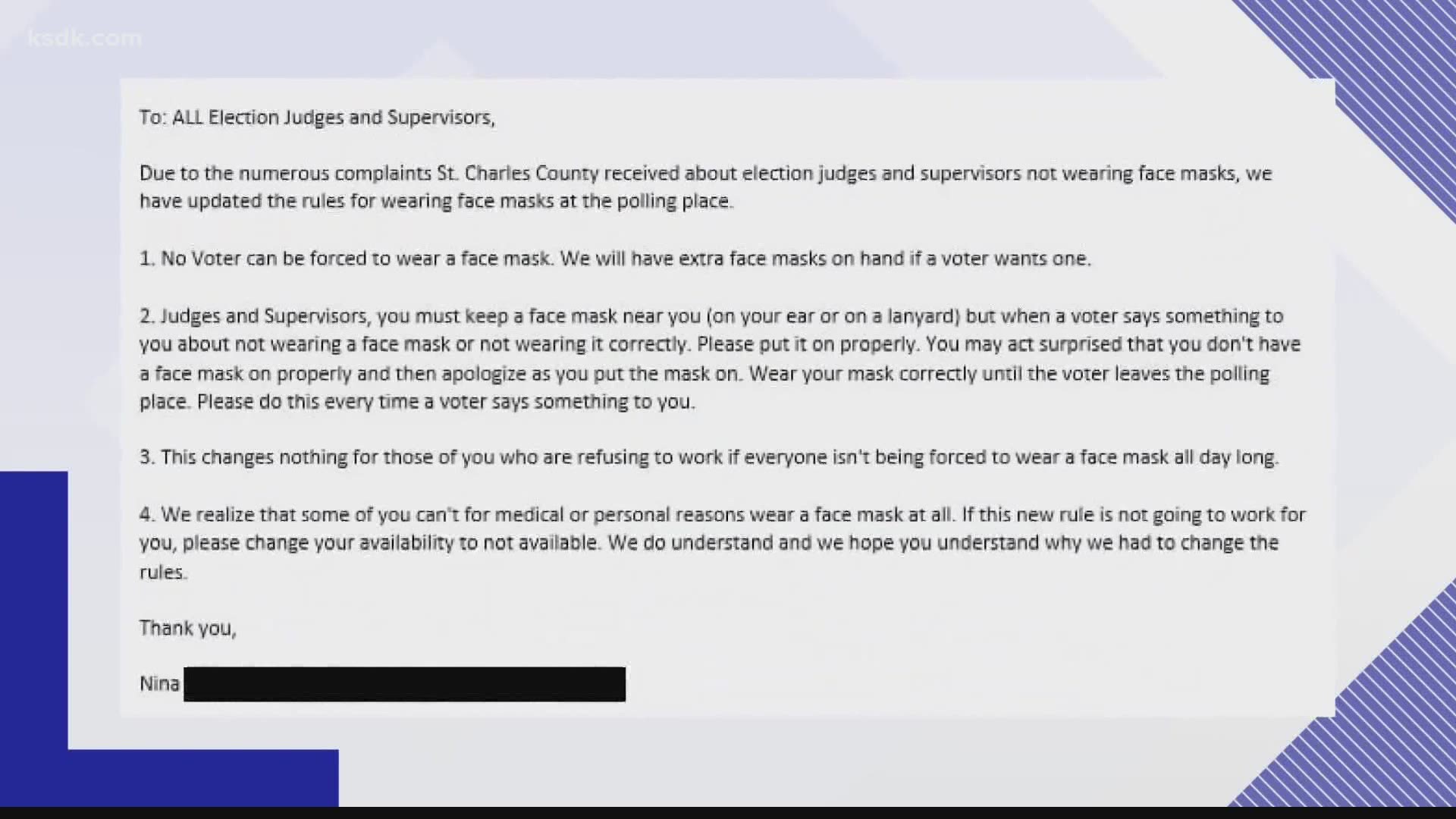 ST. CHARLES COUNTY, Mo. — St. Charles County election judge Madelyn Brandt said she was concerned by the lack of mask usage during her primary election shift, saying she was not aware some workers would go the full 14 hours “in close proximity to me all day without masks on.”

But within hours of receiving an email from election leaders Wednesday, she had already informed them she would not return for the November general election.

“The election recruiters that sent out that email were intentionally trying to deceive voters, and really an ethical boundary was crossed for me,” Brandt said.

In it, election leaders wrote: "Judges and supervisors, you must keep a face mask near you (on your ear or on a lanyard) but when a voter says something to you about not wearing a face mask or not wearing it correctly. Please put it on properly. You may act surprised that you don't have a face mask on properly and then apologize as you put the mask on."

The email added, "Please do this every time a voter says something to you."

“I was already kind of on the fence just in my previous experience of the primaries, and this really pushed me over the edge to really reconsider,” Brandt said. “I have decided not to go back and put myself in that position.”

And she's not alone. In a letter to County Executive Steve Ehlmann, Don Crozier wrote, "I have been an election judge and was planning on working the November election, but this email from the Election Authority indicates to me that St Charles County does not take the threat of COVID-19 seriously at all."

Crozier added, "The email from Nina Dean is completely unprofessional and seems to me to be more an exercise in avoiding responsibility, putting on a show for the voters, and ignoring the entire concept of public health."

Elections Director Kurt Bahr said they're making a lot of changes — and trying to walk a fine line while they do it — but this letter was intended to show they're increasing mask usage in a county without a mask mandate.

“It’s a delicate balance, and we decided to simply send an email out early in the process —  before we started assigning judges to polling places — so that everyone knew what the word rules were going to be expected for when it came to wearing a mask for this election.”

Bahr said election judges will be required to wear a mask when asked by a voter to do so. This compromise mostly affects workers who feel most passionately about mask mandates: those strongly in favor or those who say they cannot wear one at all for medical or personal reasons.

Brandt acknowledges the election board is probably trying to satisfy as many potential poll workers as possible, but she called the move an attempt to “pander” to both sides, but “by doing that they’re actually deceiving voters.”

Bahr said the county usually staffs 700 workers for an election, but with coronavirus procedures that number is up to 1,000. He said the additional hands will be used for sterilizing equipment and accommodating curbside voters. In addition to the increased mask usage, Bahr said they will close a lane and create designated parking spots for curbside voters whose mobility issues prevent them from entering the building.

As for Brandt, she said she will consider coming back as an election judge in the future — when she feels safe.

“I think voting is so important for our democracy, and it felt good to be an active part of that,” she said.