Chief Mary Barton said she was surprised by the no-confidence votes recently taken against her by the Black officers' organization and the St. Louis County Council 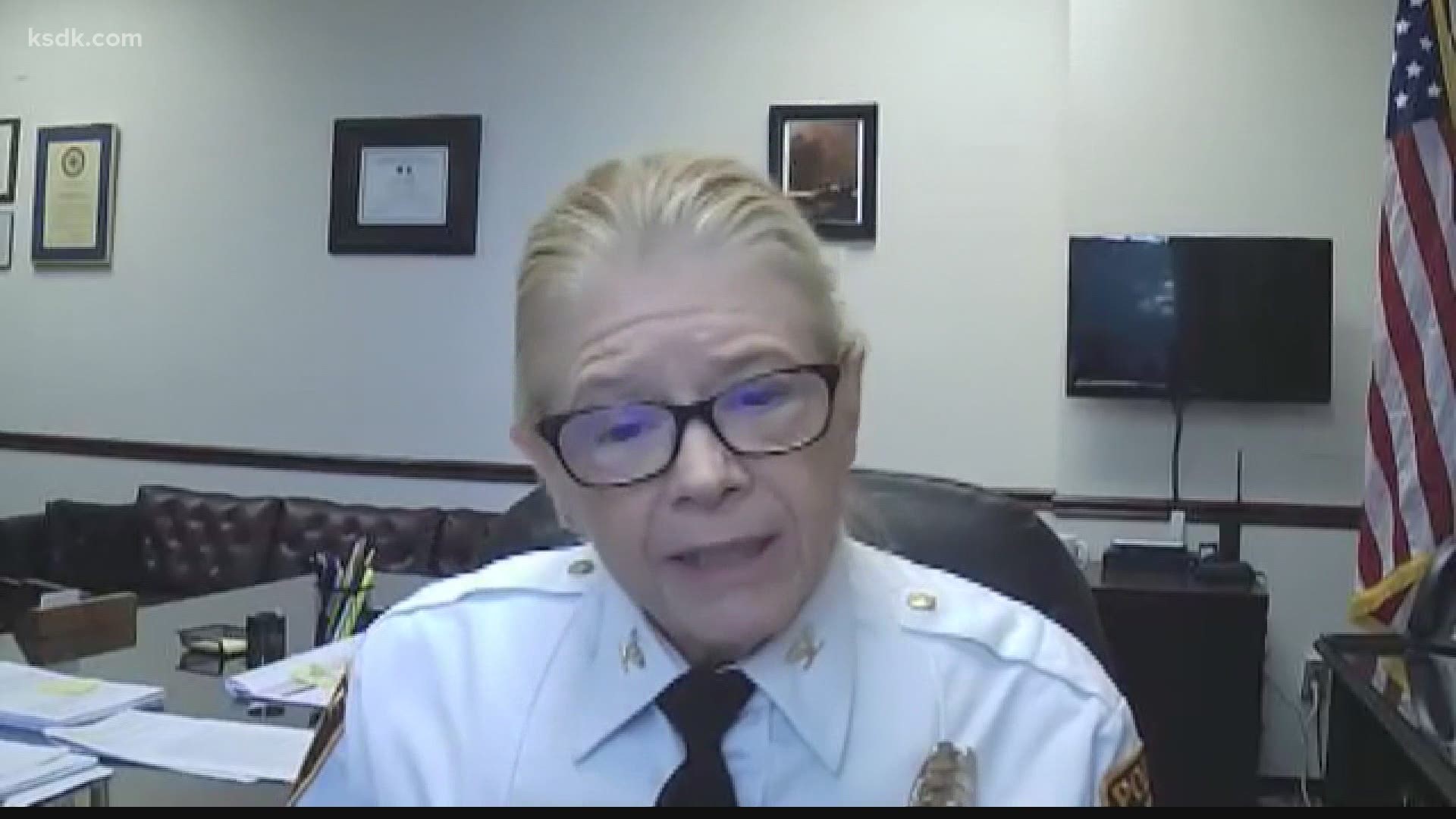 ST. LOUIS — St. Louis  County Police Chief Mary Barton said she is “surprised” by no-confidence votes coming from an organization that represents primarily Black officers and the County Council despite months of mounting public criticism from them about her leadership.

The resolution read, in part, “Barton has fumbled her way through the position of chief.”

Barton gave 5 On Your Side a 15-minute interview, in which she criticized the Council, which voted 4 to 3 Tuesday to adopt a no-confidence resolution against her. She also defended her performance as the county’s top cop after organizations representing the rank-and-file have also faulted her leadership.

“I'm absolutely surprised because if there was that many issues with what I was doing, I think I would have heard about it by now,” she said. “This sudden resolution, without giving me the opportunity to talk about it or answer to their concerns, was terribly disappointing and, I think, completely unprofessional.”

She continued: “I would have hoped that if they had these issues or they thought they believe they had these issues, that they would have spoken to me or asked to speak to me about them and handled it in a professional manner instead of making it a very public document that isn't exactly accurate or probably the best venue they could have chosen for their perceived issues with me.”

On Friday, the Ethical Society of Police issued a statement responding to Barton's interview, faulting her for dismissing the opinions of the council members who voted against her.

It read, in part, "It was misguided for Chief Barton to take a dismissive tone while categorizing their concerns as simply opinion. Chief Barton was appointed to serve the entirety of St. Louis County and should be responsive to the concerns and needs of all of its citizens, not just the areas represented by council members who have been unable to recognize her leadership deficiencies."

The resolution is a nonbinding document, but it will be sent to Barton’s bosses — the Board of Police Commissioners. It’s a five-member board — three of its members were handpicked by County Executive Sam Page.

On Thursday, Barton wouldn’t say whether she felt she had the support of the police board or Page.

“I feel that the police (board) supports this department and its decisions and its policies and procedures, and that is their function here,” she said. “And I also feel that they have made it very clear that we are moving forward and that they want to work with the County Council, the Ethical Society, the Fraternal Order of Police and all the internal stakeholders to make this an even better police department.”

Some of the issues the Ethical Society has cited during her year-long tenure include:

Most recently, the organization has criticized Barton’s decision to transfer Officer Shanette Hall out of the recruitment division and put her back on patrol. Hall is a board member of the Ethical Society and recently gave interviews to national media outlets talking about the racism Black women face on the force.

Barton said Thursday she was transferred 12 times during her 40-year career with the department — and not one of them was by her choosing.

“I can say that under my realm as chief, there have never been any retaliatory transfers, discriminating transfers made here,” she said. “Not everybody is going to be pleased with transfers that are made, but they have to be made based on what's best for the police department and for the efficient and effective operation of this department.”

In a statement Thursday, the Ethical Society wrote: “St. Louis County is riddled with issues of bias and racism and at many levels, from the academy to dispatchers. The department needs a capable leader and transformative change, and it needs it now. On Dec. 7, we called on Chief Barton to take specific actionable steps to meaningfully address systemic racism. She has had enough time to make more substantive progress than words and meetings. Just weeks away from that six-month mark, it is clear that these milestones cannot be met.

“The time for waiting is over. Both ESOP Board and the St. Louis County Council have done their jobs by declaring no confidence in Chief Barton. It is now time for the Board of Police Commissioners to act in the best interest of the public. We are all now watching, waiting for them to do the right thing.”

St. Louis County Police Association leaders say they share some of the concerns the Ethical Society has, and is currently polling its 915 members to gauge how Barton’s administration is contributing to low morale, according to Executive Director Joe Patterson.

Patterson said the police union has been meeting with Barton regularly and brought many issues to her attention including what it deems to be punitive transfers of officers out of their preferred posts to retaliate against them for a variety of reasons.

“I’m blindsided that she’s blindsided to be totally honest with you because we’ve been talking about this for close to a year now, so I think it’s factually inaccurate to say the chief had no idea this was coming,” Patterson said. “Overall the St. Louis County police department is an excellent police department, but we are not without our problems.

“It’s going to take a bold leader to work us through the situation we’re in right now, and with the right leadership we can get that done, but Chief Barton’s got to decide if she’s the right leader.”

Barton said Thursday the police union and ESOP have had a seat at her table.

Granda said since Barton took office May 1, 2020, 15 general orders, 12 special orders and five bulletins have been created or updated, including the department’s promotional policy, which the police union and the Ethical Society “weighed in on,” the prisoner security and accountability policy as well as updating arrest reports and booking of prisoners to reflect transgender, intersex and gender-nonconforming individuals.

Barton also pointed to the following initiatives as examples of her success:

Barton also said she plans to work to repair the relationships with those who have said they have no confidence in her.