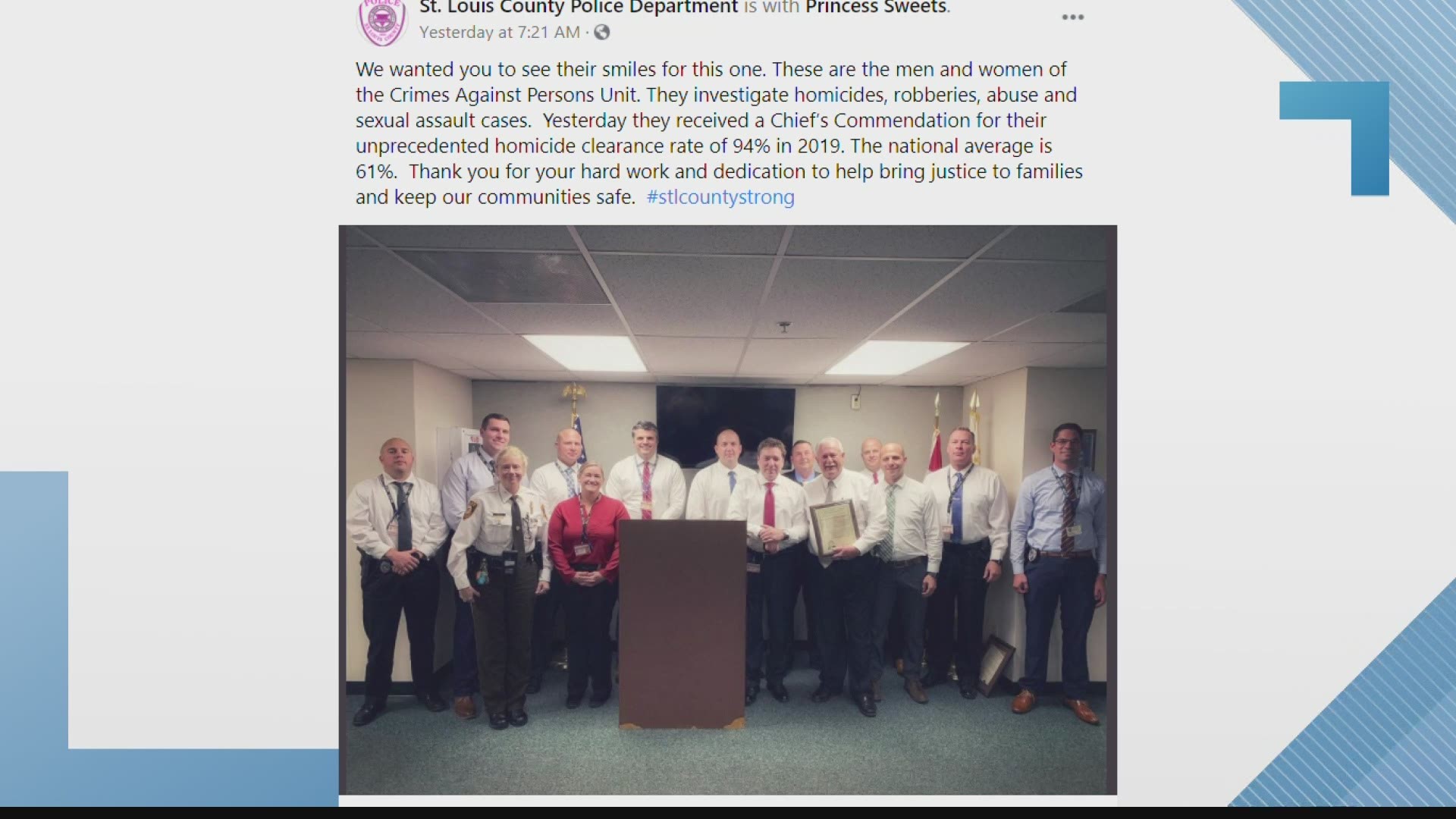 ST. LOUIS COUNTY, Mo. — A social media post meant to praise the accomplishments of St. Louis County detectives is getting push back because of who is not in the picture.

"When I saw that picture I said immediately wait what's missing here… oh nobody of color," said John Bowman, president of St. Louis County chapter of the NAACP.

Thursday, a photograph posted by the St. Louis County Police Department was meant to celebrate a milestone, but was clouded by what was missing.

"That picture says to the obvious eye that St. Louis County is made up in a homogenous way and does not have inclusion," said Bowman who recalled received calls about the post almost immediately after.

"We have a serious problem with diversity in our police department. There's no way of getting around that," he added.

But some say the focus should be on the numbers. The department boasting about an unprecedented homicide clearance rate of 94% in 2019.

"It's a shame that what they accomplished is now the backstory.... that doesn't negate the work that these detectives have done," said Matt Crecelius, business manager for the St. Louis County police union.

Crecelius admits there is a diversity problem within the department. Which stems in part from a recruitment failure that's spans years.

However, he says in this case... people are missing the big picture.

"The community in St. Louis County doesn't care what these detectives skin is they care that they get justice for their loved ones," Crecelius said.

Bowman says he's not trying to discredit the work these detectives have done.

“I just wonder if that was a department with all African Americans taking pictures like that how would the public react,” he said.

5 On Your Side reached out to the St. Louis County Police Department for comment. their public information officer sent the following statement:

"Our clearance rate is definitely higher than the national and statewide numbers, however, I do not have those statistics.

The importance of this story lies in our victims and their families and the closure we provide for them. The obvious fact is that our detectives do an incredible job every day building relationships within our communities, regardless of race, culture, religion, or sexual preference. Those relationships must be established in order to gain the community’s trust in obtaining information used to build cases in arresting and convicting the individuals responsible for the most violent crimes occurring in our neighborhoods. We are working hard to improve the diversity both on our department and within our specialized units and will continue to work toward that while working hard for our community to reduce and solve crime."