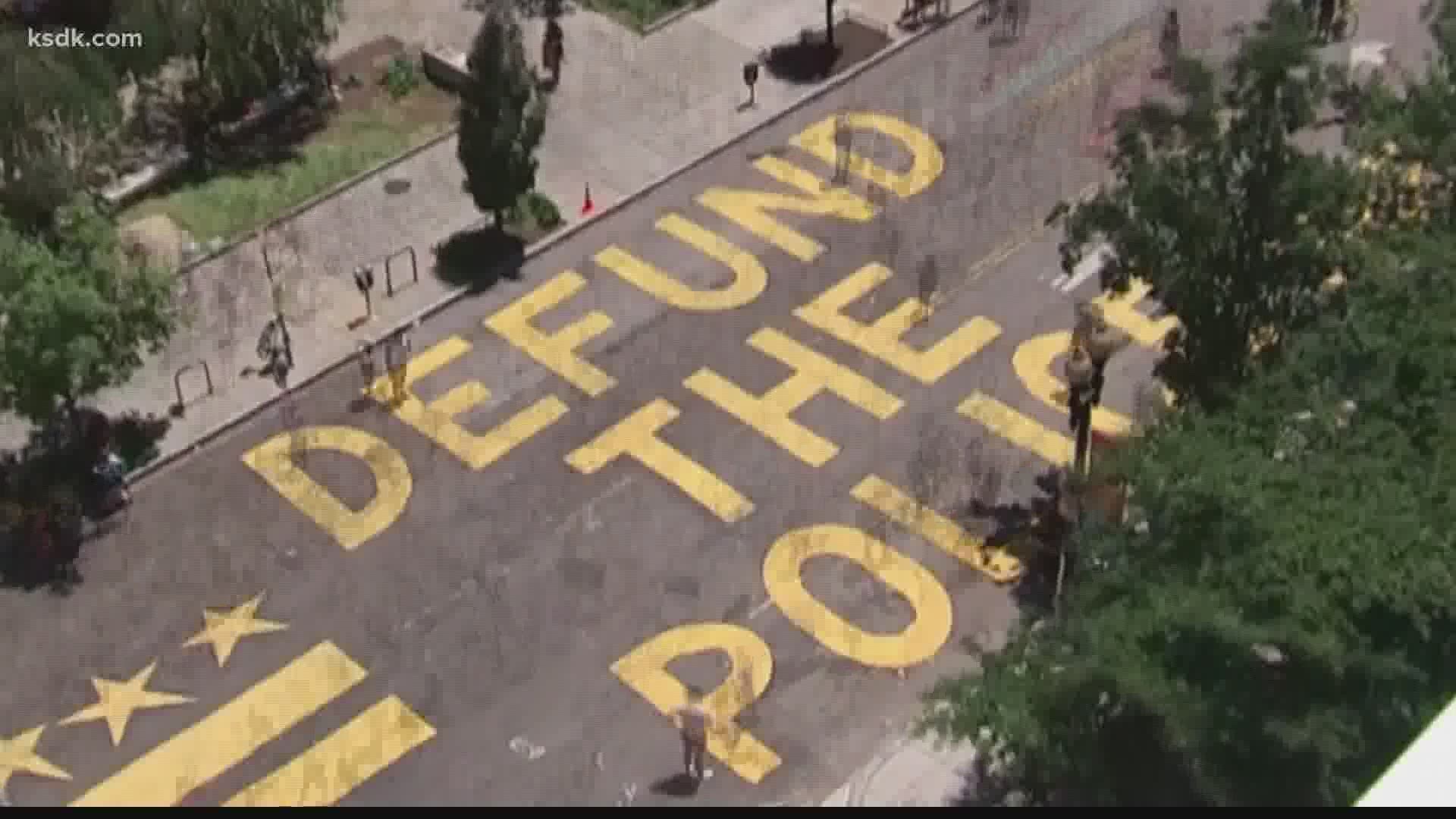 ST. LOUIS — It's an idea that's been spreading across the country after the death of George Floyd: defunding the police.

While some advocates say we should abolish police departments altogether, most argue some money from big police budgets should be reinvested in social services.

While it may seem like a new idea, the push to defund police started after the 2014 protests in Ferguson.

Since then, the group Coalition Against Police Crimes and Repression has been holding town halls to gauge public safety. Co-chair John Chasnoff said he found police don't necessarily make people feel safer, while health care, education and jobs do.

"If we can solve our education problems, our health care problems, our housing problems, crime will be reduced. At the same time, we won't be putting this huge amount of money into arresting and incarcerating," Chasnoff said.

READ ALSO: Changes to St. Louis police ‘use of force’ policy to be proposed this week

Chasnoff said the idea is about looking at old ways of policing with fresh eyes.

"We're spending money on police because we fundamentally believe they are a part of public safety," said St. Louis Mayor Lyda Krewson. "Do we need to review, engage, report and reform? Of course we do, and we will, but we still believe we need police," added Krewson.

The mayor said she wouldn't support dissolving the department.

"The way we are going to go, though, is to continue to try to find funds for social services," added Krewson. 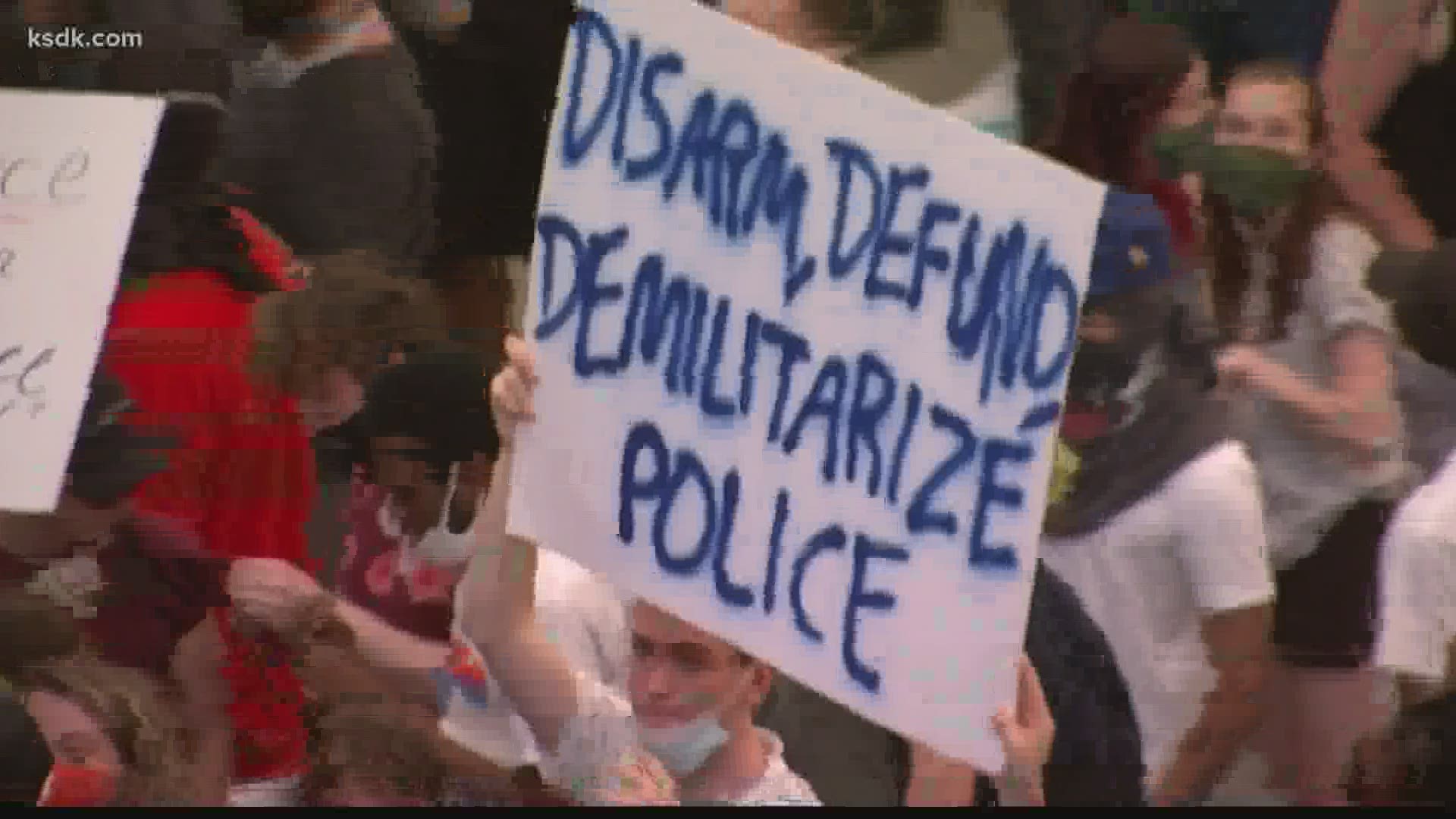 As it stands, the fiscal year 2021 budget for the St. Louis Metropolitan Police Department, excluding grants but including pension costs, is $208 million.

The Department of Human Services, which provides programs for homeless people, youth and families in need and veterans, will get just over $30 million.

The health and hospitals budget is $12.7 million.

Chasnoff said there's room in the police budget to reinvest some money into social programs without impacting police work. One example: every year the police department receives money for about 130 positions that go unfilled, he said.

Board of Aldermen President Lewis Reed has been pushing the program Cure Violence for years, and it's just getting started in the city. It focuses on providing housing, jobs and other social services in high-crime communities and bridging the divide through trust. About $2.3 million of the health department's funding goes toward the program, his spokeswoman said.

At the same time, some argue too much responsibility falls on police officers.

He said it's especially difficult for police to respond to mental health-related calls.

"They'd be more than willing to give that piece up to some social services organization; however, keep in mind that many times these mentally ill people can be violent," Fitch said.

Fitch, a Republican county councilman, said he supports the conversation about expanding social services but not the idea that the funds would to come from police budgets. He said government should find a different funding source.

"What you don't want to do is cut the police, move all this money over to social services, and then find out it's not working," he said.

He added that when police budgets are cut, training is usually the first thing to go.

When St. Louis County Executive Sam Page addressed the concept of defunding police Monday, he said there already have been changes in leadership.

"I think we started this conversation about equity and inclusion really in our police department about six months ago, and we've already started initiating review and reform to replace our entire police board," Page said during a briefing Monday morning.

While next steps are up for debate, one thing appears to be clear.

"Change is coming, there's no doubt about that," Fitch said.

READ MORE: When protesters cry 'defund the police,' what does it mean?