Despite the devastation and millions of dollars in damage, nobody was seriously injured or killed 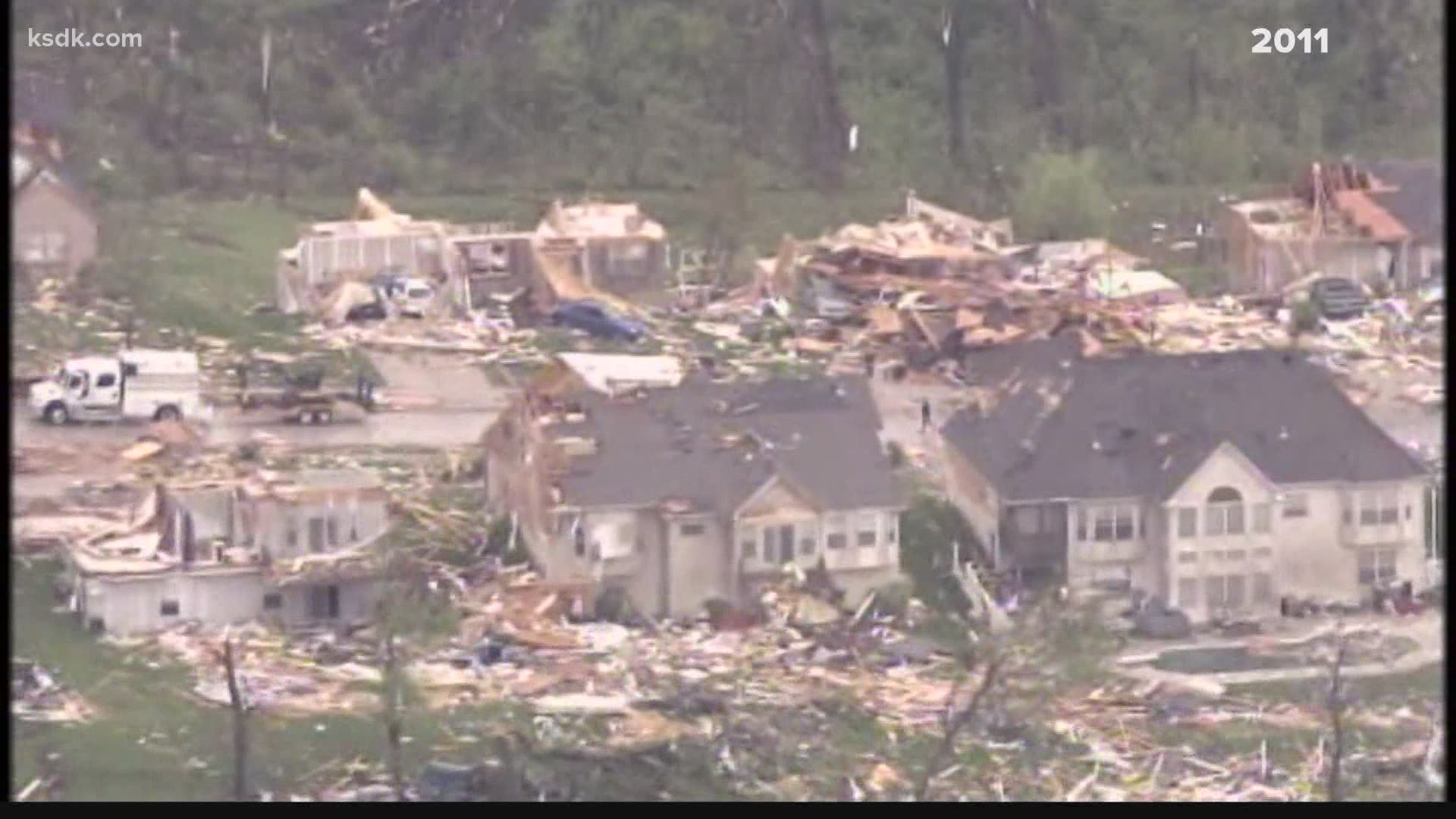 ST. LOUIS — Ten years ago, a powerful tornado tore through the St. Louis area, leaving a trail of damage from north county to the airport to the Metro East.

Despite the devastation and millions of dollars in damage, nobody was seriously injured or killed.

Touching down during the evening of April 22, 2011, it later became known as the Good Friday tornado. It was categorized as an EF-4, the second-highest rating on the Enhanced Fujita scale, with winds reaching up to 165 miles per hour. Its path was a total of 22 miles long and it was 0.4 mile wide.

It first touched down along the northern edge of Creve Coeur just before 8 p.m., according to the National Weather Service's report of the storm. It picked up intensity as it swept into Maryland Heights and St. Ann, damaging homes and businesses.

It then crossed Interstate 270, reaching its peak intensity as it approached Bridgeton, causing even more wreckage.

Next, it took aim at St. Louis Lambert International Airport.

The NWS report describes the moment: "Many of the large windows in the main terminal building were blown out or damaged by the flying debris ... and a large section of the roof was peeled from Concourse C."

A 5 On Your Side report from 2016, which marked the five-year anniversary of the tornado, quoted Rhonda Hamm-Nierbruegge, the airport's director.

Because of news coverage that warned the tornado was coming, those inside Lambert had about 15 minutes to prepare. People inside the airport took cover in interior rooms and in the lower level. Five people were injured due to flying debris, the NWS report says. They were treated and released from the hospital.

Watch 5 On Your Side's coverage of the tornado's five-year anniversary in the video player below.

Lambert was forced to close for a few days and damage was estimated at about $20 million. The tornado forced the airport to reevaluate its infrastructure and safety protocol. Afterward, it installed improvements like tornado shelter signage and having a secondary command center for airport personnel.

As the tornado moved through communities in north county, the storm weakened to an EF-2 but still managed to rip the roofs off many homes in the area, take down trees and snap power poles.

The tornado eventually crossed the Mississippi River and entered Illinois about 1.5 miles south of the Chain of Rocks Bridge. At least 100 homes were damaged in that area, the NWS report says.

"Once we are able to get through the first few minutes of that horrible evening with no loss of life, it has been a silver lining," Hamm-Nierbruegge said.