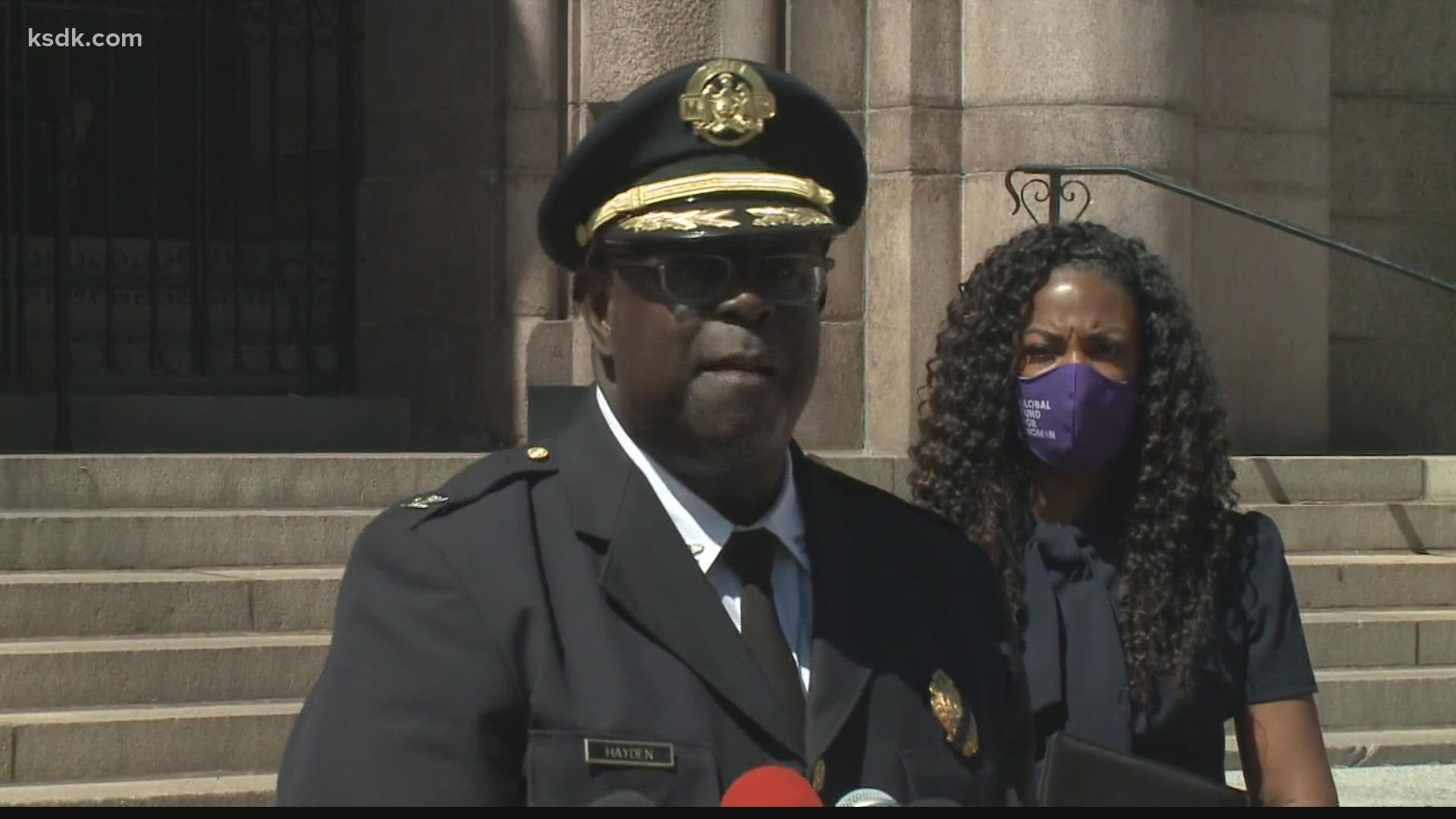 ST. LOUIS — St. Louis Police Chief John Hayden announced Wednesday he will be retiring in late February and city leaders plan to conduct a national search for his replacement.

"This decision was carefully and prayerfully reached between me and my family," Hayden said at a news conference Wednesday. "It's time to pass the baton."

Hayden thanked his department and said he believed the St. Louis Metropolitan Police Department was the best in the world because of the employees.

Hayden, 55, has been with the department for 35 years and has served as the city’s 35th Chief of Police.

The St. Louis police department has never hired a chief from outside its own ranks, but has conducted pricey national searches in the past.

Mayor Tishaura Jones and Director of Public Safety Dan Isom joined Hayden at the Wednesday news conference for the announcement.

Isom was the department’s 33rd police chief before his retirement in 2013. While he was chief, Hayden served as his commander of internal affairs.

As public safety director, he will now be tasked with hiring the department’s next chief.

"We wish Chief Hayden all the best," Isom said. Isom said the next chief will need to be up to the challenges of recruitment, retention, fixing bias, fair policing and community engagement.

Jones thanked Hayden and pointed to the decreased number of homicides this year compared to last year.

The mayor spoke about the search for the next chief. She stressed they will focus on preventing and solving violent crimes and making sure the right professional is deployed to the right incident.

Jones said the community will be highly involved in the selection process. The community can weigh in with a survey that is on the city website's. She announced two listening sessions in October and a town hall on the hiring process.

Jones told 5 On Your Side's Rhyan Henson on the campaign trail she believed leadership in the city's Public Safety Division needed to "go in a different direction." That included then-Public Safety Director Jimmie Edwards and Hayden.

“Everything is on the table,” Jones told Henson in March. “That means every department the mayor is responsible for.

"Unfortunately, there are no sacred cops. We have to go in a different direction and either fortunately or unfortunately we have to interview everyone responsible for keeping our city safe. If they aren’t a part of the plan or solution, maybe they should try and find employment elsewhere.”

Hayden’s tenure as chief has been marked by the highest homicide rate in the city’s history – though homicide totals are trending down this year.

At the peak of the violence, Hayden once told 5 On Your Side, “every police chief owns their homicide rate.”

He moved away from the hot-spot policing strategy the previous administration deployed, focusing instead on a larger high-crime area in north St. Louis that became known as “Hayden’s rectangle.” During the past year, the department has moved back to more of a hot-spot approach, focusing on pockets of high-crime areas.

As chief, Hayden has overseen the second largest police department in the state with an authorized strength of more than 1,300 sworn officers and more than 400 civilian employees. He oversees an annual budget of $170 million, a third of the city’s budget, according to his online biography.

Before becoming chief, Hayden split his time between investigative and administrative assignments. He served as a commander in the North Patrol Division from 2013- 2017. Before that, he oversaw the Internal Affairs Division.

Hayden served as the executive aide to then-Chief Joe Mokwa from 2001-2007. He also served as both an instructor and training coordinator in the police academy.

Hayden has a bachelor’s degree in mathematics from Washington University where he played college football and a master’s degree in management from Fontbonne University. He was accepted into Saint Louis University’s School of Law and has completed more than 50 credits in its Juris Doctorate Program. He has also completed 15 hours of graduate coursework in Theological Studies at the Covenant Theological Seminary.

Hayden is a member of Kappa Alpha Psi Fraternity, Inc., the Police Executive Research Forum, the International Association of Chiefs of Police and the Major Cities Police Chiefs Association. He has served as a Deacon at Pleasant Green Missionary Baptist Church in St. Louis since 1998.

Hayden and his wife, Michelle, have been married for 28 years and have three daughters, Ashley, Kathryn and Kaylynn. He is expecting a grandson.

The Ethical Society of Police released a statement Wednesday afternoon:

John Hayden’s nearly 35-year career of public service through the ranks of the St. Louis Metropolitan Police Department is a source of inspiration for us all. So many of our members have been mentored by Chief Hayden or otherwise influenced by him in a meaningful way.  We wish Chief Hayden all of the best in his retirement and journey forward.

When Chief Hayden was appointed, we issued our public support yet stated that we would hold him accountable for our community and our officers as we've held previous chiefs accountable. The same holds true for the next Chief of Police who undoubtedly has a complex job ahead.

The next Chief of the state's second-largest police force will be called to address such challenging issues as recruitment and retention, bias and racism within the department, and building the trust of the community. He or she must be someone who understands equality, fair police tactics, strategies, and community engagement.

If police morale and retention are to improve, the next Chief must be bold in instituting policies to make SLMPD competitive with other departments, including pay raises; addressing the lack of manpower, possibly through 10 to 12-hour shifts; and making the recruitment and promotions process fair by allowing failed applicants to retest within six to 12-months and limiting the discretion that the Director of Personnel has in the hiring process.

We support a nationwide search that begins within our own ranks. A thorough process for selecting the next Chief, including input by organizations such as the Ethical Society of Police, is critical to ensure new leadership is ready on day one to address complex issues that are pervasive in the Department. We look forward to working with the next Chief to better the department for our officers and the community.