The St. Louis Circuit Attorney released a statement saying trust in police officers is a key part of the justice system but did not give specifics on why the list was created. 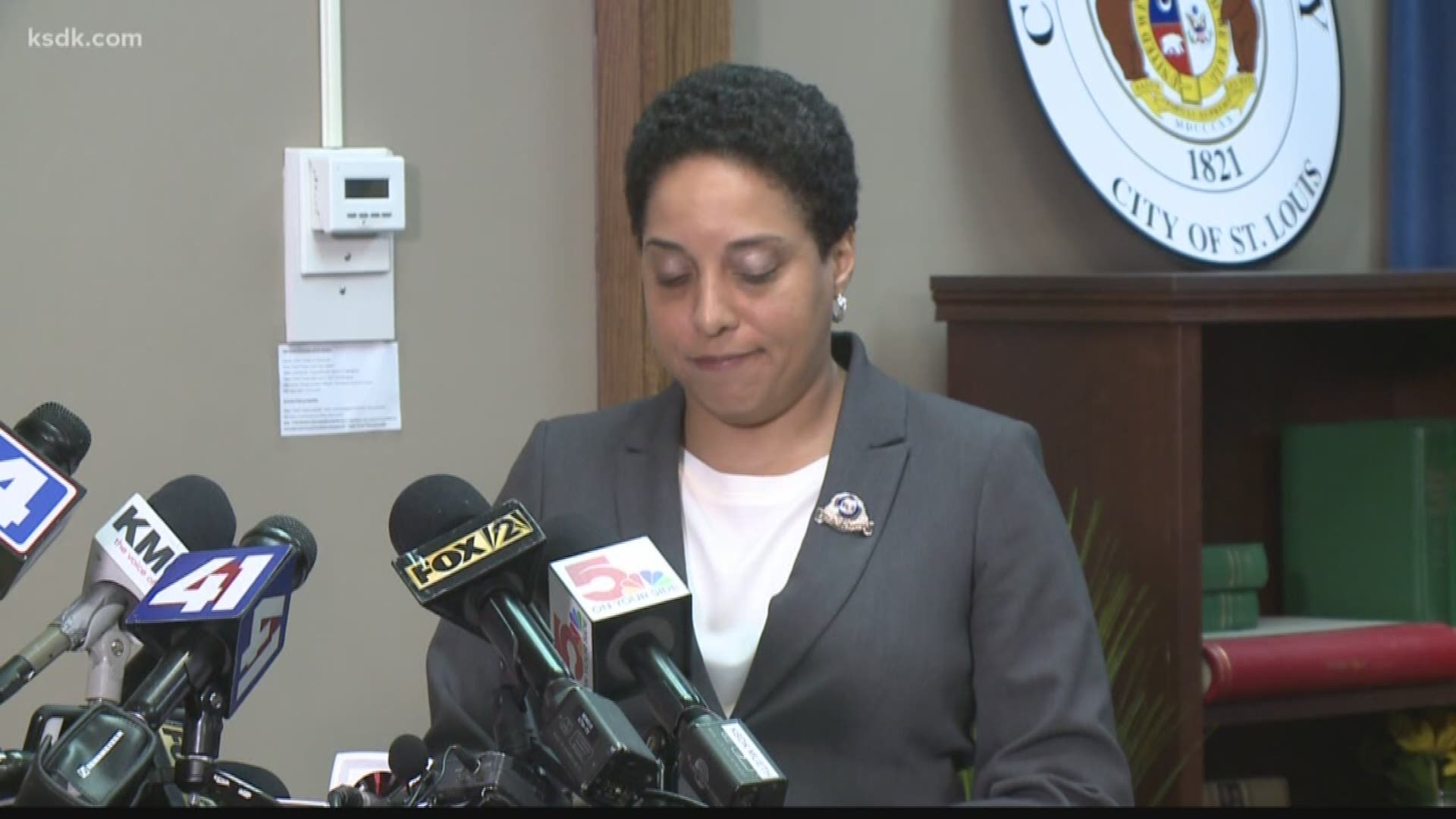 "No leaders from our Department asked the Circuit Attorney's Office to compile an exclusion list, nor do we have need for such as list. I was quite surprised to have received it. There is not indication that the list was properly vetted.Whenever we are concerned about an officer's credibility, or utility with respect to protecting our citizens, that officer can be placed on administrative duty pending a determination about his or her future with the agency. This list is unnecessary overreach which would be better handled on a case-by-case basis."

Circuit Attorney Kim Gardner responded to the chief with the following statement:

"If Chief Hayden is unaware of the details regarding our concerns with the credibility of some of his officers, then he needs to look no further for the information than from his own command staff. We have documented communications between our Chief Warrant Officer and the Commander of Professional Standards regarding this issue. In fact, Major Sack has even expressed his appreciation to us for helping to hold his “guys accountable.”

The credibility standards in my office go beyond whether someone has been cleared of formal criminal charges. We do not make compromises on credibility, and the public should be assured that each officer will be afforded due process.

While I understand the Chief’s concern about his manpower issues, I believe the community cares that we have a fair and just criminal justice system in St. Louis. That’s what is at the heart of this matter, and I am committed to doing my part to ensure the system has integrity.

In addition, it’s imperative that we have open and honest communication between the two organizations. I will reach out to the Chief on Tuesday and arrange a meeting with him, the Public Safety Director and the Commander of Professional Standards, so we can address this matter and move on with the important work we have to do on behalf of the of the people of the City of St. Louis."

A spokesman for the St. Louis Metropolitan Police Department said they were given an exclusion list created by the Circuit Attorney's Office, saying she will no longer take cases handled by certain officers.

A spokesman for the St. Louis Police Officers Association said there were 28 officers on the list. He said the Circuit Attorney owes the department and the public an explanation of why she made the list, which she has apparently not provided.

The St. Louis Circuit Attorney released a statement on Thursday saying trust in police officers is a key part of the justice system but did not give specifics on why the list was created. The full statement is as follows:

To do our jobs properly and legally, we must have confidence in the accuracy and honesty of the oral and written reports of police officers. A police officer’s word, and the complete veracity of that word, is fundamentally necessary to doing the job. Therefore, any break in trust must be approached with deep concern.

When we prosecute a case, we have the potential to take someone’s liberty from them. I’m confident that the SLMPD leadership share in our commitment to ensure the integrity of every single case police bring to our office for charges.

On Friday the Circuit Attorney’s Office released this statement saying the list was created at the request of the SLMPD,

Circuit Attorney Kimberly M. Gardner is committed to the public safety of the residents and its visitors of the City of St. Louis. It's important for the community to understand that the Circuit Attorney’s Office will continue to pursue current, open criminal cases involving these officers, as long as the criminal case can be proven without the testimony of these specific officers. Proving a crime beyond a reasonable doubt in a court of law requires credible evidence. Police testimony is only one form of evidence.

Prosecutors will work with police to do everything possible to ensure violent offenders are held accountable, regardless of the role any of these police officers may have had in the gathering of evidence.

For several months, key leaders of the Circuit Attorney’s Office and the St. Louis Metropolitan Police Department have had in-depth conversations about prosecutors’ concerns regarding the credibility of several city police officers. Contrary to reports, these concerns were not a surprise to the SLMPD this week.

Exclusion of witnesses is entirely appropriate when there are questions of veracity, whether they are police officers or lay people. In fact, it is the job of prosecutors to determine the credibility of all witnesses and make the appropriate decisions on who they are going to put on the witness stand. Prosecutors across the country exclude police officers from bringing cases to their office when they believe it’s necessary. To say this never happens is inaccurate.

The list was created at the request of the SLMPD, not at the urging of prosecutors, as it was intended for internal purposes to ensure integrity in the system. Circuit Gardner had a productive conversation with the Director of Public Safety today to ensure he was clear about her position on this important matter and to express her disappointment that the someone in the police department felt it necessary to leak this information to the media, which has resulted in fostering misinformation and fear in the community.

Circuit Attorney Gardner will not jeopardize the integrity of the criminal justice system by allowing the concerning actions of a small number of police officers to taint the good work of the honest, credible and hardworking police officers of our police department.

Prosecutors first brought the issue of these officers to police leadership in an effort to ensure integrity in the system.

After prosecutors discussed the specific officers about which they had concerns, the SLMPD asked for a physical list, which was subsequently sent to them.

State Sen. Nasheed is calling for hearings into the exclusion list. She released this statement on Friday:

“We deserve to know why this unprecedented step was taken,” said Sen. Nasheed. “If the circuit attorney’s office no longer trusts the word of more than two dozen city police officers, the people should know why and how this trust was broken.

A spokesman for the mayor's office said they had no comment.

Missouri Attorney General Josh Hawley released a letter saying his office has requested a copy of the letter.