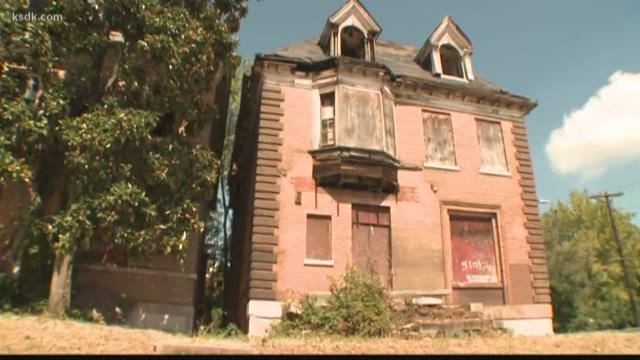 ST. LOUIS — It's a tax some say voters didn't approve. But the people of St. Louis will have to pay it anyway.

So, what changed? And where will the money go? You only need to look as far as the closest St. Louis neighborhood with a vacant home.

During 34 years living the 5100 block of Enright Avenue in the Academy neighborhood, Emma Visor's done a lot to keep her home looking good.

“These roses have been here a while and I try to keep them pretty,” she said, watering the flowering bushes in her front yard.

Visor's proud of the place where she and her late husband raised their family and the neighborhood around it.

“We've got nice neighbors around this neighborhood.”

The problem is, over the years many neighbors have left. Now, Visor can stand on her front porch and see vacant homes in all directions.

“The neighborhood is kind of run down right now. And I wish we could do something to bring it back up,” she said.

The city’s Land Reutilization Authority owns around 3,000 vacant buildings. Five of them are on Visor's block alone.

In April 2017, 58 percent of city voters supported Proposition NS, a tax that would pay for repairs like patching rooves, and tuckpointing bricks to make salvageable buildings owned by the city water tight. The idea was to keep them from getting worse so that buyers might be interested in rehabbing them.

“I would like to have them remodeled and somebody move in,” said Visor.

But the city's charter said the tax needs a 66 percent voter approval to pass. So, the city challenged the rule in court and this week, Judge Michael Stelzer decided the state's threshold of 4/7 majority applies and the city can start collecting the tax.

City residents will pay around $11 per $100,000 of assessed value of their home. The extra money will help the city get up to $40 million in bonds. But the amount can’t exceed $6 million per year.

Visor generally hates the idea of having to pay more taxes. But she says this is one she can get behind.

City officials don’t know yet how the money will be spent or how many buildings will be patched up per year. But they say shoring up vacant buildings over the next few years will help bring neighborhoods back to life and increase safety across the city.