The best places to go green in the St. Louis area on St. Patrick's Day

There is something to do for everyone across the St. Louis area St. Patrick's Day weekend 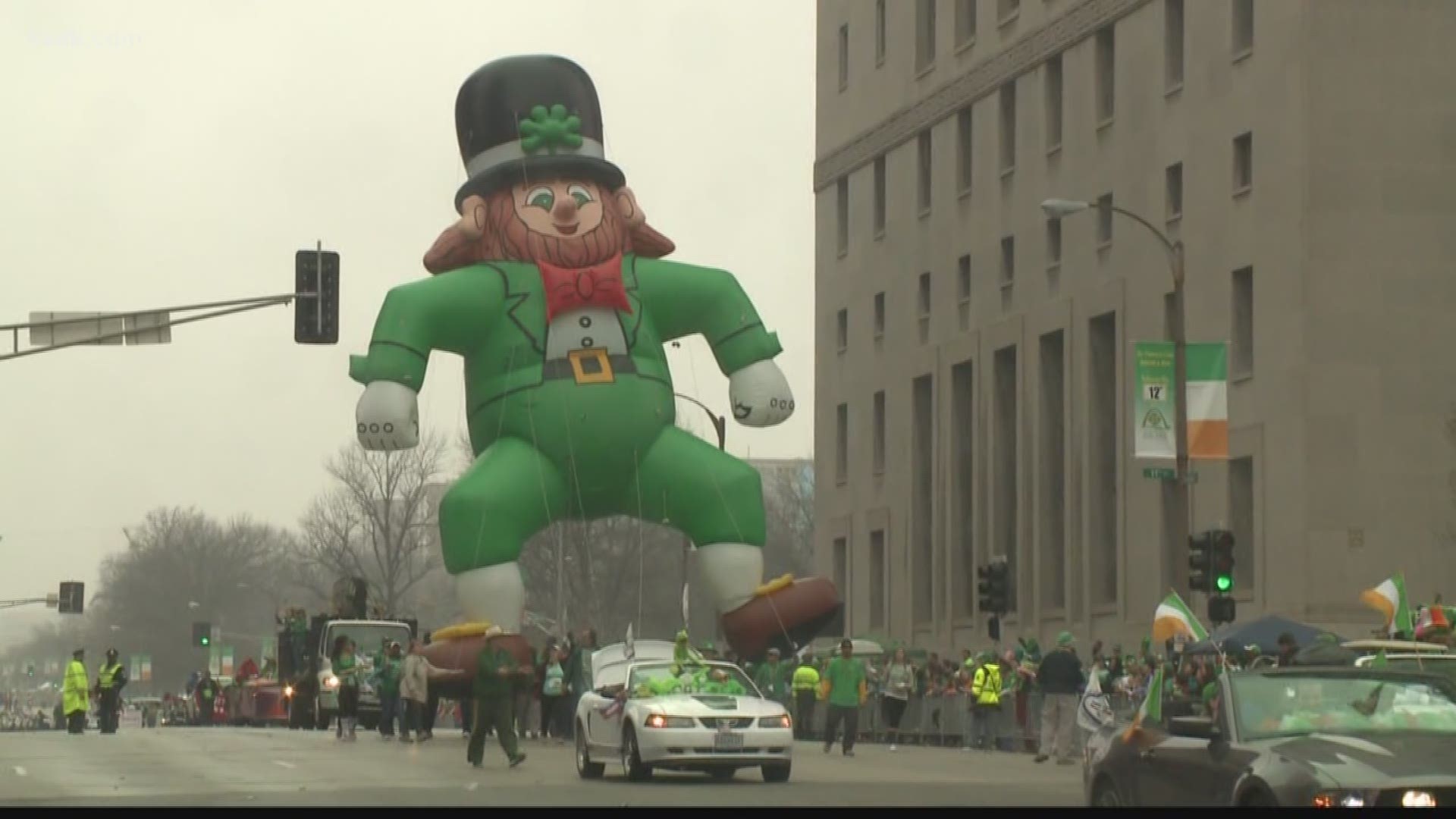 ST. LOUIS — There is something to do for everyone across the St. Louis area St. Patrick's Day weekend.

This Cottleville tradition began 11 years ago when the Cottleville Firefighters Outreach had the first race and parade. Since then, it has grown to be the largest single-day event in St. Charles County.

The Shamrock Run: The run is a 7K race through Cottleville that starts at 8 a.m. in front of the Fire Truck at 1385 Motherhead. The winners from each division (Male, Female, Wheelchair) will be recognized and awarded with a commemorative fire helmet at approximately 9:30 a.m. at the finish line, which is behind Bemo’s in Cottleville. Until Feb. 28, registering costs $38. From March 1 until the day of the race, the price rises to $44. There will also be a 2-mile untimed fun run starting and ending in the same locations. All runners will receive a t-shirt and runners over 21 years old will receive refreshments at the finish. To register for the race, click here.

The Shamrock Parade: March 16 at noon. The parade will run down Highway N from Warren Elementary to Francis Howell Central High School. Approximately 100 floats and walking groups will participate. Streets will reopen after the parade finishes around 2 p.m. Coolers, chairs and other portable items are allowed. Due to road closures for the day, there will be a shuttle system. For more information on parking, shuttles and times click here.

Over 250,000 spectators regularly attend the St. Patrick’s Day Parade downtown, making it the largest event in downtown St. Louis. The theme for this years parade, the city’s 50th annual hosting, will be St. Louis Irish heritage.

The “Meet the Irish” Dinner: Friday, March 15 from 6 p.m. to 11 p.m. St. Patrick’s Day Parade Irish Dinner traditionally takes place the night before the parade at the Hilton St. Louis at the Ballpark downtown. Cocktails and entertainment will start the formal evening before a variety of dignitaries from Ireland and the United States are introduced. The evening will end with Irish dancing. To buy tickets click here.

Run: Saturday, March 16 at 9 a.m. This year marks the 41st annual parade run. Over 8,000 people participate in the run, making it one of the largest running events in the area. There is a 5-mile run and a 3K through the streets of downtown and midtown St. Louis. Runners who register by March 15 receive a bib number with a timing chip affixed, making them eligible for prizes. The cost to register from now until February 28 is $36. From March 1 through March 15 it will cost $40. Run-day registration costs $45. Runners can look forward to enjoying the Michelob ULTRA Runners’ Village at Kiener Plaza directly after the race. To register, click here.

Parade: Saturday, March 16 at noon. This year marks the 50th annual St. Patrick’s Day Parade. The parade will run through downtown, beginning at 20th and Market streets and heading east until it ends at Broadway and Clark. The parade is comprised of over 120 units, including marching bands, floats, clowns and massive cartoon-character balloons.

RELATED: How you can get a free ride home in St. Louis on St. Patrick's Day

Parade: Sunday, March 17 at 11 a.m. The Ancient Order of the Hibernians St. Patrick’s Day parade will run from 11 a.m. to approximately 1 p.m. The street festival immediately begins when the parade ends. Outside alcohol, backpacks, large bags and coolers will be prohibited. Security staff at entry/exit points will ask people to return these items to their cars or homes.

Festival: The festival with feature a variety of food, music and vendors. The Rusty Nail band will play from 1 to 5 p.m. on the main stage, which is located at Clayton and Wise. Food and drink vendors along the parade route include Pat Connolly's Tavern Hibernian Beer Booth and McDaniel’s. Over eight vendors will be selling Irish shirts, jewelry and more. Outdoor sales begin at 9 a.m. and end at 6 p.m. Indoor establishments will close at 8 p.m.

Run: The Lucky Leprechaun 5K starts at 9 a.m. Tickets are $25 for adults and $15 for children until February 26, then prices increase. T-shirts are guaranteed for those who sign up by Feb. 26 at 5 p.m. To register, click here.

Parade: The Ancient Order of the Hibernian’s St. Patrick’s Day Parade starts at 11 a.m. at 3rd and West Main. It will travel down Main Street past Charles Street.

Block party: The Belleville block party kicks off as soon as the parade route is cleared. It will be from noon until 5 p.m. For more information, click here.

Lucky’s St. Patrick’s Day Bar Crawl: Starting at 4 p.m. on Saturday, March 16, bar crawlers can go on an eight-hour drinking venture. Tickets include cover at all featured venues, food and drink specials, a professional photographer, prizes and an after party. Host Crawl With Us will be updating the event information on their Facebook page.

John D. McGurks: McGurk's was established in 1978 as a one-room pub house and has grown to be a St. Louis favorite. It is not only known to have great Irish food, music and drinks but for its 15,000 square foot outdoor garden that has a waterfall, three outdoor bars and enchanting landscaping. Another aspect that sets McGurks apart from others is the music. It isn't hard to have a heel-clicking time at the Soulard gem that has hosted Irish musicians from Galway, Dublin, Cork and Derry. The brick and wood interior of the bar is decorated with Irish artifacts from all ages. McGurk's is located at 1200 Russell Blvd. For more information visit their website.

Tigin Irish Pub: Tigin's, which is Gaelic for 'small cottage,' celebrates Irish heritage 365 days a year, not just on St. Patrick's day. Just $5 can get you into Tigin’s all day long on Saturday, March 16. Tents open at 7 a.m. for ‘pints and pancakes,’ which will be served until 11 a.m. Live music starts at 2 p.m. and goes until close. The venue will only be letting in people ages 21 and up after 8 p.m. The same schedule will be repeated on Sunday. Tigin’s is located at 333 Washington Avenue in St. Louis. For more information click here.

The Pat Connolly Tavern: Head to the oldest Irish bar in St. Louis on Saturday for a St. Pat's 'Warm Up' party. On Saturday from 3 p.m. to 10 p.m. partygoers can enjoy live Irish music with no cover. There will also be Irish drink specials and corned beef plates. The bar will open back up bright and early Sunday morning at 6 a.m. for breakfast and drinks. Four bars inside will open at 9 a.m. You can watch the Dogtown parade march by right in front of Pat's while staying warm under the party tent. Live Irish music will be featured inside all day starting at 9 a.m. and Feel Good Inc. will be playing outside starting around 1 p.m. after the parade. Pat's is located at 6400 Oakland Avenue. For more information click here.

Maggie O'Briens: The downtown Irish-themed bar and restaurant opened in 1979 and will be having its 40th annual party for the 50th St. Patrick's Day parade that runs on Saturday from 9 a.m. to 12 a.m. on Saturday. Todd Thomas will be the DJ for the day. There will be extra bars and food stations set up for the crowds of people. The menu includes Irish classics like the St. Paddy melt, Irish beef stew, fish and chips and the Fighting Irish (Reuben with corned beef, Swiss, sauerkraut and dressing on grilled maple rye). Maggie's is located at 2000 Market Street downtown. For more information click here.

Nick's Pub: For those in Dogtown, Irish pubs are around every corner. Nick's just happens to stay open later than most others - until 3 a.m. The bar has an expansive local craft beer selection and 101 beers on tap, live music and Irish staples like shepherds pie, Newcastle fish and chips and fried Reuben bites. Nick's is located at 6001 Manchester Avenue. For more information click here.

Seamus McDaniel's: Another Irish staple in Dogtown is Seamus McDaniel's, which opened in 1985. Head into the pub on parade day for some deals and sit inside or on their outdoor patio, eat a Seamus burger and wash it down with an Irish ale. McDaniel's is located at 1208 Tamm Ave. More information is on their website.

O'Shay's Pub: If you're in The Grove on St. Patrick's Day head over to O'Shay's for live music and drink deals. The pub is having live music on Sunday from noon on and on Monday until 10 p.m. There will also be Left Hand Brewing Specials over the weekend. Menu items include corned beef tacos, O'Shayperd's Pie and the "Kilkenny Burger," a half-pound corned beef patty with Swiss and horseradish sauce. Wash it down with the pub's extensive selection of whiskey, beer and Scotch. O'Shay's is located at 4353 Manchester Avenue. For more information on their deals and events click here.

Helen Fitzgerald's: Serving St. Louis since 1992, this large Irish pub combines Irish and American culture. The Irish grill and pub hosts a St. Patrick's Day weekend celebration with live music, green beer and Irish food and drink specials. The celebration starts on Friday at 9:30 p.m. with live music from Dr. Zhivegas. Saturday will feature live music from Top Gunz, Irish dancers, and more specials starting at 10 a.m. Starting at 7 a.m. on Sunday there will be a "Kegs 'N Eggs" brunch, followed by KSHE 95's John Ulett broadcasting live at 8 a.m. He will give away prizes and concert tickets. There will be Irish dancers, bagpipe players, a photo booth, and DJ Frizzy and That 80s Band playing throughout the day and night. Helen's is located at 3650 S. Lindbergh Blvd. All of the event details are on the Helen Fitzgerald's website.

Llywelyn's Pub: This popular pup has an extensive menu of traditional Irish and Welsh dishes as well as modern Irish dishes that inspired the owner on a trip to Ireland. If food is a priority for your St. Patrick's Day celebration, Llywelyn's will not disappoint. Try the Welsh rarebit, bangers and mashed, Guinness-braised steak flatbread or if you are feeling lucky - an order of dragon wings. Llywelyn's Pub has five locations and St. Paddy's specials of each location are on their website.

Molly Darcys: Located in the Seven Gables, the quaint and homey ambiance of the pub may transport you 9,300 miles away to the pub's original location in the southwest Ireland town of Killarney. Thanks to the strong Celtic background brought to life in the restaurant's dishes, your taste buds will be transported as well. Lamb stew, pot pie and corned beef and cabbage are among favorites. To find out more about Molly's click here.

O'Connell's Pub: O'Connell's first opened in 1962 and has kept the same values since. Although the location has changed, the menu hasn't changed much over the past 30 years, making it known for its history and consistency in the St. Louis area. Come in to raise a pint and try one of the pub's famous burgers. O'Connell's is located at 4652 Shaw Ave. Check out more about the popular pub or call at 314-773-6600.

Riley's Pub: Known for its friendly staff, cozy atmosphere, and the cheapest Guinness in town, it won't be hard to make yourself feel at home at Riley's. Riley's is located at 3458 Arsenal Street and will post St. Patrick's Day deals on their Facebook page.