He didn't offer specifics but said "things happened that were horrendous," and he suggested that it's politically incorrect to talk about about it. 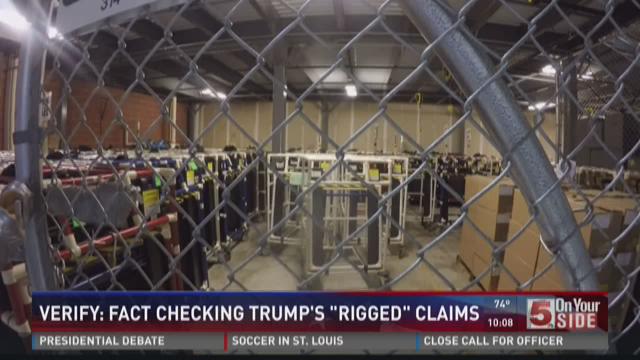 Donald Trump’s repeated attacks on what he’s calling a “rigged” election have emboldened some of his supporters to ratchet up their own rhetoric, while simultaneously offending and angering elections officials across the country.

"They even want to try and rig the election at the polling booths where so many cities are corrupt," Trump said at a campaign event Tuesday. "Take a look at Chicago. Take a look at St. Louis. Take a look at some of these cities where you see things happening that are horrendous."

Elections in the United States are run largely by county clerks and are overseen by elected secretaries of state, many of whom are Republicans themselves and are frustrated at Trump's willingness to cast aspersions with no evidence. Trump supporters generally can't cite specific evidence of voter fraud, but they insist the media and government officials are conspiring against the Republican presidential nominee.

The USA TODAY Network spoke to multiple elections officials across the country — many of them Republicans — and all insist adequate safeguards exist. Among those pushing back at Trump's claims: Republican officials in Colorado, Ohio, Iowa, New Jersey, Florida and Arizona. One notable exception is Maine Republican Gov. Paul LePage, who on Tuesday said he's "not confident" the state's election will be "clean," WVOM radio reported.

"This is an election about truth, and you're not going to get it from the dishonest media," Trump said at a campaign rally here on Tuesday, barely 24 hours before the final presidential debate. "The press has create a rigged system and poisoned the minds of so many of our voters."

Trump's repeated attacks on the media prompted many of his supporters at the rally in Colorado Springs to turn around and scream "tell the truth" to reporters penned at the room's rear. Many of those supporters say the people accused of rigging the system would obviously insist it's fair.

"I think it’s the politicians that are in power are afraid that there’s going to be some big changes, and they’re scared to death for their positions," Ralph Darnell, a 56-year-old crane operator from Muscatine, Iowa, said of a possible rigged election. "They’re going to do everything they can do to keep the status quo. I do believe that.”

Trump has been fanning the flames for days, offering a near-constant stream of complaints via Twitter, in addition to his rallies.

"Of course there is large scale voter fraud happening on and before Election Day. Why do Republican leaders deny what is going on? So naive!" Trump tweeted on Monday, without offering evidence or specifics.

He said a day earlier: "The election is absolutely being rigged by the dishonest and distorted media pushing Crooked Hillary — but also at many polling places — SAD."

"I'd advise Mr. Trump to stop whining and try to go make his case to get votes," Obama said at a White House press conference. "If whenever things are going badly for you, you start blaming somebody else, then you don't have what it takes to be in this job."

On Tuesday, Trump singled out Philadelphia, Chicago and St. Louis as cities with voting problems. He didn't offer specifics but said "things happened that were horrendous," and he suggested that it's politically incorrect to talk about about it.

Jacksonville public relations consultant Robbie Foster, who is president of the Florida Young Republicans Club, said the integrity of the Nov. 8 election can only be jeopardized by cities like Chicago, which are led by Democrats. “That’s where you see ballots are being cast by dead people,” Foster said. “But I certainly trust the electoral process in Florida.”

Gerald Miller, a GOP precinct leader in Colorado Springs, said he seen enough evidence of deliberate efforts to suppress Trump voters during the state’s Republican Convention to worry the same patterns could play out on a national scale. “It’s one of those things — you have a hunch but you can’t prove it,” Miller said. “You just have a suspicion.”

Elections officials say people criticizing the elections process either fail to understand how elections in this country actually work or are speaking too casually about "the election." State conventions are run by the parties, with no oversight from the government.

A spokeswoman for Colorado Secretary of State Wayne Williams said it’s “insane” to think county clerks would throw an election, especially when many clerks are Republicans like Trump.

“Clerks don’t pray for winners and losers but short lines and large margins of victories so there are no recounts,” Lynn Bartels said. Colorado’s voting machines aren’t connected to the Internet, and most people vote by mail.

In New Jersey, Assembly Minority Leader Jon Bramnick said he disagreed with Trump “100%” even though he did not dispute there could be precincts around the state where illegal votes are cast.

“It’s a very dangerous path to go down,” Bramnick said. “The most important thing is our belief in our institutions. We may disagree with each other on policy, but we don’t believe the institutions themselves are corrupt or rigged. That’s not to mean there’s no bias in the media, but I think it’s very dangerous to say somehow the vote count is rigged.”

Iowa Secretary of State Paul Pate, a Republican, reassured voters over Trump's concerns. Like many other elections officials, Pate said he remains in close contact with federal Homeland Security investigators to monitor hacking attempts. "My pledge to every Iowan is that you will be able to cast your vote and your vote will count," Pate said.

Arizona Secretary of State Michele Reagan said an attempted hack into the state's voter registration system over the summer eroded voter confidence, but she called that a misplaced suspicion. Arizona's system for tallying the votes is not online, but instead runs through a network of thousands of voting machines. To rig an election, someone would have to get into each machine — or a number of machines — to tinker with the results.

Cathy Vandehey, who owns an electrolysis business and runs an airport ticket counter in Appleton, Wis., said Trump is bringing a legitimate concern to the forefront. She took particular aim at billionaire Clinton donor George Soros, repeating a claim found on a smattering of right-wing websites that Soros has a financial interest in a company that tabulates votes. No mainstream media websites have verified or debunked the claim.

“It’s very upsetting. The voter fraud is so disturbing," said Vandehey, 42. "I know that George Soros personally owns 16 of the polls himself, and not only that, he controls almost all of the media.”

Following Trump's rally Monday in Green Bay, Wis., geologist and Trump supporter Michael Carney said he's been unconvinced so far by those on both sides of the election fraud argument.

"I don't know enough to know if there is fraud," said Carney, 58, who lives in Denmark, Wis., about 20 miles southeast of Green Bay. "You hear people saying there's no fraud, but some of the things he brought up (Monday) were things that indicate there is indeed fraud. I don't know the answer to it, but I think it's certainly worth bringing it up."