"They are getting good with it," she said. "Somehow they are printing it out a lot better than they used to." 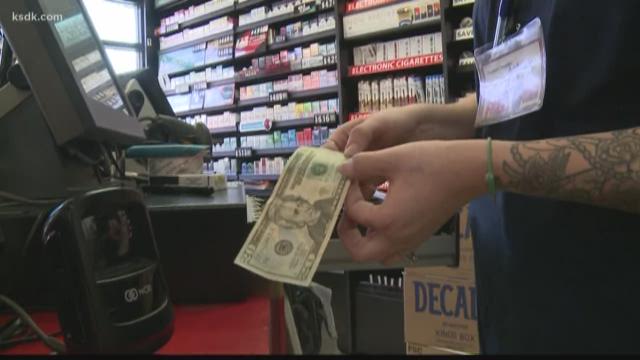 ST. LOUIS COUNTY – The United States Secret Service is investigating a St. Louis County man accused of making his own money and trying to rip off a local restaurant.

St. Louis County police said Brandon Ervin, 28, went into a White Castle on January 18 in the 13000 block of Manchester Road and tried to fool cashiers and buy food with fake money.

Authorities said when Ervin was arrested, he had more counterfeit bills on him and also drug paraphernalia.

Federal authorities stepped in and investigated Ervin. On February 1, a federal grand jury indicted Ervin on seven counts of counterfeiting and forgery of U.S money.

Ervin was in possession of one $100 bill, one $50 bill, four $20 bills and a $10 bill. Police said it's possible he could be connected to some of the 29 reports of counterfeit money in St. Louis County since the start of the year.

Ervin is currently at a southeast Missouri behavioral facility, while he waits to go before a judge.

Ashley Delozier, an assistant manager of a Circle K gas station, said they’ve received two fake $20’s in the past week. Delozier said the store makes sure to check all bills $20 and up. If they are fake, the she doesn’t give it back and tells the proper authorities.

She told 5 On Your Side sometimes they are obvious to spot.

"I've gotten one where the eyes were criss-crossed," she said.

Delozier said because businesses are looking to spot counterfeit bills, criminals are trying to outsmart them. She’s warning folks to be on the lookout because she said the scammers are getting better.

"They are getting good with it,” she said. “Somehow they are printing it out a lot better than they used to."

What do you do if you think you have a fake bill?

If you hold an authentic bill up to the light, you'll see "USA" and the bill's value running vertically across the bill. For example, "USA 20" would be on a $20 bill. Also, on the right-hand side of a $20 bill, look for a second image of Andrew Jackson's face.

Police said the ultimate test is to put the bill under a UV or black light. The security thread on a real $5 bill should glow blue. On a $10 bill, the strip is orange. On a $20 bill, it's green. For a $50 bill, it's yellow. For a $100 bill, it's pink. You can also use a counterfeit marker and if the shade of yellow changes than the bill is a fake.