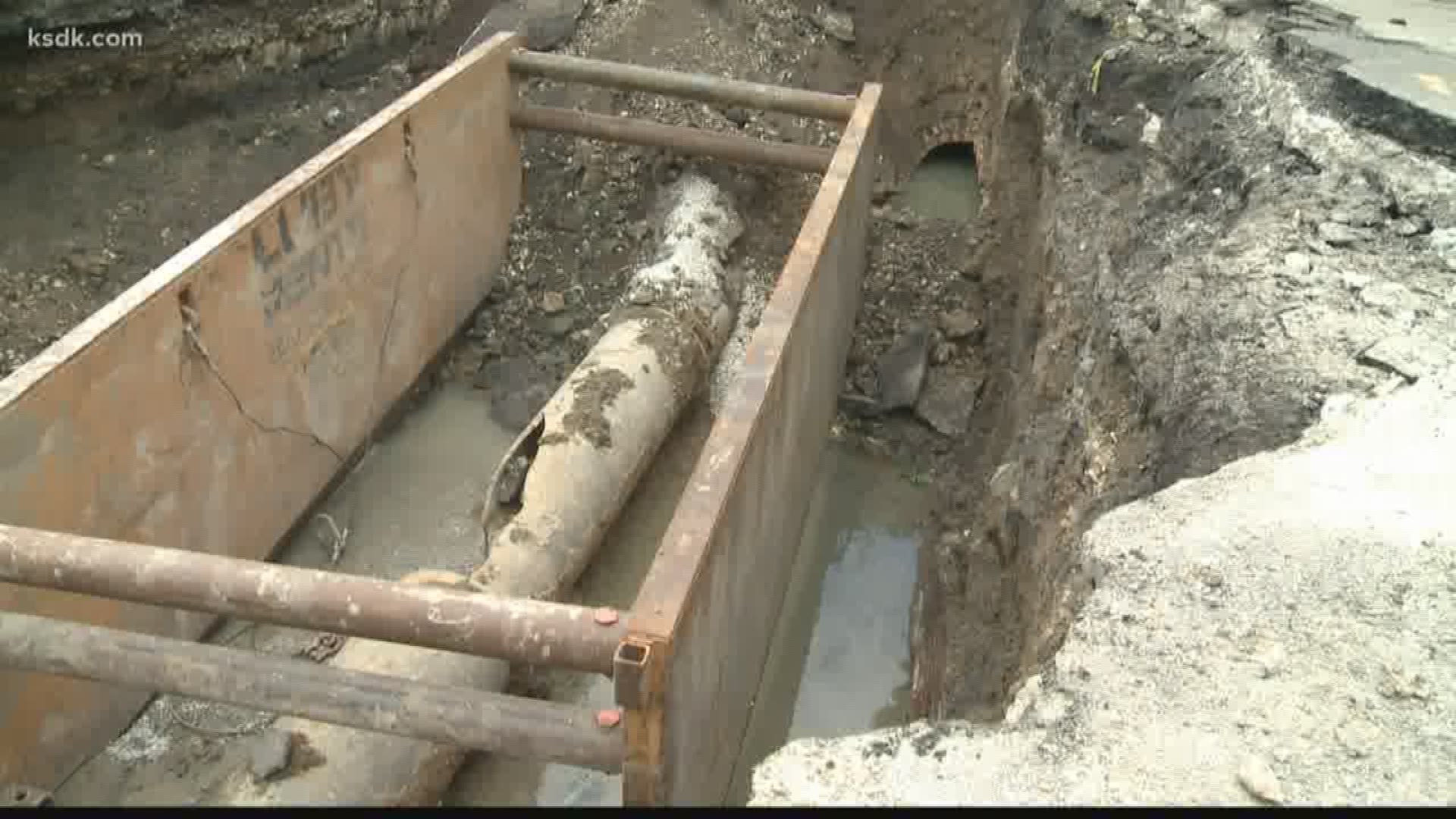 ST. LOUIS — City crews have been working nonstop to fix the massive water main break that tore up Lindell Boulevard next to Forest Park in what is expected to be an expensive repair.

A St. Louis city official said the cost could run up to $150,000 to repair a stretch of Lindell Boulevard by Forest Park that looked more like a little lake on Thursday.

There isn't a large emergency fund so the water department will be working within the budget they already have, said Vincent Foggie, the water distribution superintendent for the city of St. Louis.

The water division is figuring out what caused this. It could be the heat or all the cars using the road, according to Foggie. However, he said he knows one issue definitively.

"This was probably in since the World's Fair was in St. Louis," he said about the pipe that broke.

Foggie said most of the pipes in the city are more than 100 years old. As for what is stopping the next water main break in old city pipes from happening, Foggie's response was clear.

"Nothing is going to stop that," he said. "It could break the next block. There is no preventative maintenance for that."

He said the only way to know there's a problem is if people see water trickling in the streets when it hasn't been raining.

At that point, he said someone needs to call the city's water division, because there is likely a problem with a pipe.

The other way to fix the issue is to replace these aging pipes. Foggie said they're fixing not only the crack on Lindell, but they're also replacing 70 feet of piping.

For a 70 foot stretch, making up a small portion of one block on Lindell, the piping alone costs $25,000. That does not include the cost of labor.

It's not just the water division out on Lindell; so is the streets department for the city.

The road has cracks, chunks missing and has buckled at least 100 feet in front of the hole, away from Union Boulevard.

Rob Corley has lived along Lindell for 15 years. He said he's concerned how safe it will be to drive along the boulevard even after the water main line is fixed.

Corley said he wants to know what the city is going to do to make sure the actual integrity of the road is okay for people like him to drive on.

He said his fear is the road reopening while someone is driving. He said he drives that stretch pretty much every day.

Streets Commissioner Kent Flake said the road will be safe to drive on when it is slated to reopen in the coming days.

"The pavement is all up and down like a roller coaster right now," he said. "So the goal would be to get in 18 inches output in a rock base, top it off with a little more rock, then we'll put three to five inches of asphalt on."

He said city crews will be monitoring the road every couple days after it reopens. He said more work could happen in the fall to the street.

However, he encouraged people who live and use Lindell Boulevard to call the city immediately, if something doesn't look right when their work is done.

RELATED: This man is 105 years old and he hasn't slowed down on the greens