"We had enough of it. We’re not going to let it pass anymore. And we didn’t want to be a small town that lets this continue," the protest organizer said 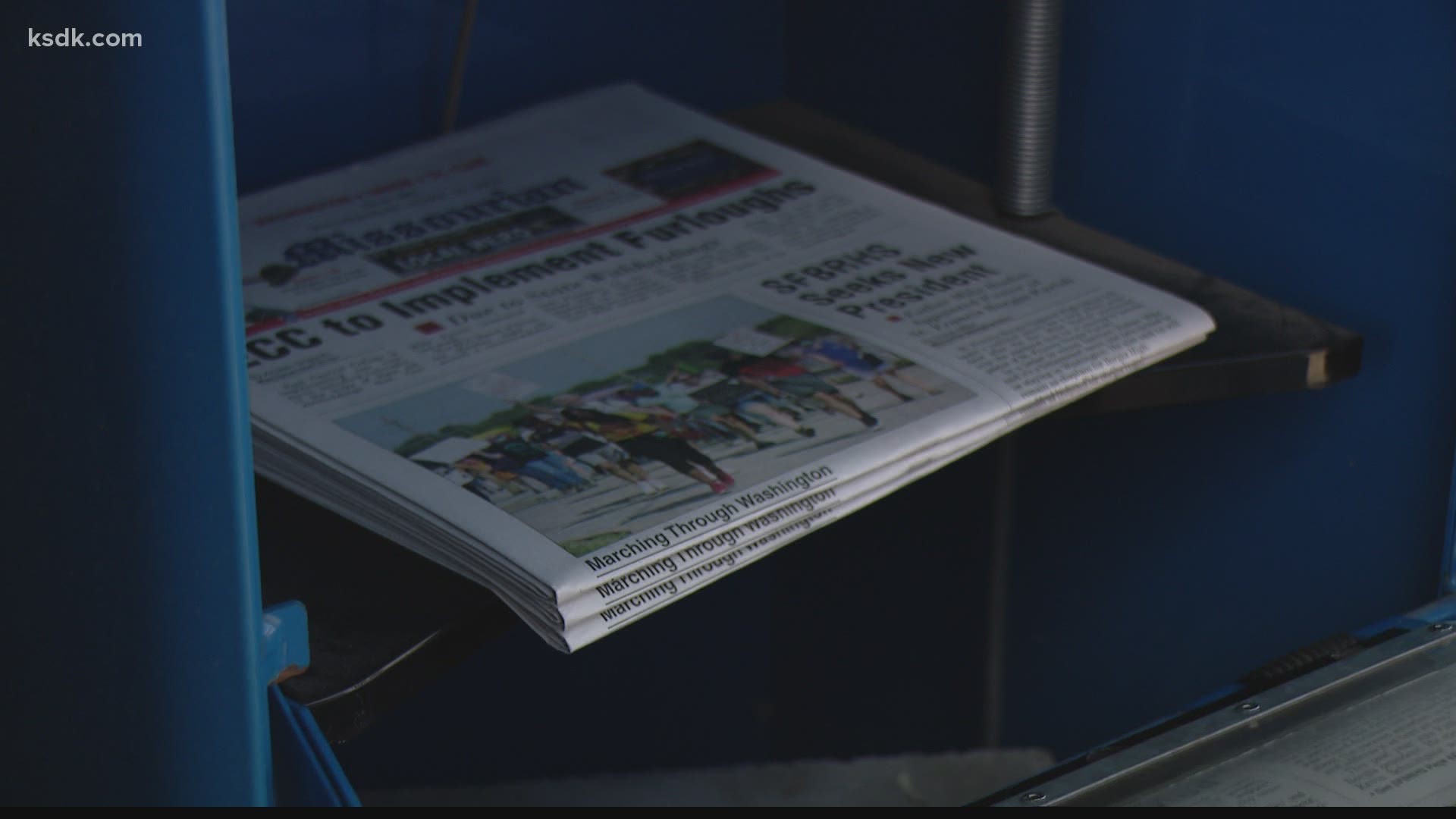 WASHINGTON, Missouri — Protestors took the streets in Washington on Saturday after a family-owned paper ran an editorial cartoon that many are calling racist. Afterward, they held a silent protest and candlelight vigil.

The event was co-organized by Matthew Jansen along with Alexandria Gray, who is the head organizer for the Peaceful Protest in Franklin County group. The group has now grown to more than 2,000 members on Facebook and has held several protests in the county since the death of George Floyd.

Jansen said the editorial cartoon that ran in The Missourian on Wednesday sparked even more motivation for him.

"I thought it was a big middle finger at first," Jansen said after opening up The Missourian to page 6C.

A cartoon showed a white woman being robbed by a black man.

The man responds, "Good luck with that lady. We defunded the police."

The two co-owners of the newspaper issued an apology and stepped down. The publisher, their father, also resigned.

"We know his daughters would not let this go through," Jansen said. "I think what he (the publisher) saw was a simple cartoon, but we saw more than that."

Jansen said this was a prime example that a conversation needed to be had.

"Racism in small towns should no longer be tolerated and that was a big thing for us," he said.

Jansen said racism needs to come to an end, including in his rural area.

"We had enough of it. We’re not going to let it pass anymore. And we didn’t want to be a small town that lets this continue," he said.

Gray said Peaceful Protest in Franklin County is here for the long haul.

"We are Equality Right Now," Gray said. "We're building the foundation to create even greater change, starting with the rural areas of our region where racism is still not only being bred and spread, but white supremacy prevails against what should be common sense.

"Our intent is to help our communities overcome the racial injustices and inequalities that it is facing.

"We plan to create change through public protest, community empowerment, and by identifying opportunities for greater equity in businesses and workplaces throughout the county.

"Our movement is committed to effecting positive change in our communities. We want equality right now, but we'll be around as long as it takes to change hearts and minds and level the playing field."

Protester Phyllis Capers wanted to make her voice heard in a place she calls home.

"With living in a smaller area, people are set in their ways," she said. "It’s really hard to break that cycle. But I know it can be done, but people need to be wanting to learn and listen."

As strangers and friends walked side by side, their messages echoed along Old Highway 100 Saturday evening.

As their feet move forward, they hoped the conversation would too.

After the march, the group gathered along the side of the highway, lit candles, and stood in silent protest. The silence lasted for 9 minutes, representing the eight minutes and 46 seconds that Derek Chauvin kept his knee on George Floyd's neck.

There will be a protest in front of the Missourian Monday morning from 9 a.m. until noon. Organizers said they want to protest the cartoon but also have a conversation.

On June 28, the group will hold a protest in Sullivan in the evening. An exact time for the protest has not yet been set.

RELATED: Protesters gather in DC for the 16th day of demonstrations amid George Floyd's death

RELATED: Protesters march in The Loop to bring attention to the 'Delmar Divide'