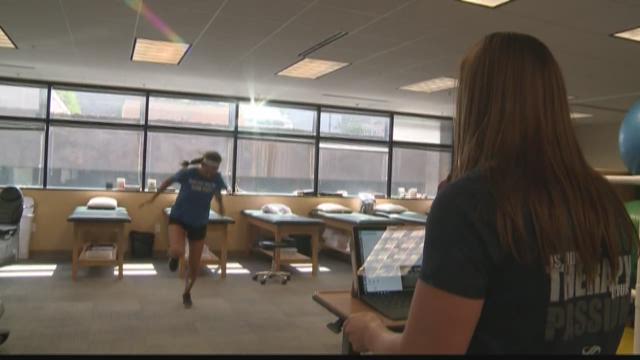 Australian sensor technology used by several professional sports leagues in the U.S. is being used by SSM Healthcare in Creve Coeur. dorsaVi is wireless technology that tracks and measures in real time how elite athletes move, providing valuable information during recovery from sports injuries.

Lauren Nuelle was living her dream, playing college soccer at Webster University, until three knee surgeries cost her two years of eligibility. “My first ACL tear, I tore in 2015. It was a non-contact tear. I planted my foot, tried to run and I heard a pop,” said Nuelle. “I’ve torn it twice since.”

Recently Nuelle worked out with SSM Healthcare sports therapists, with dorsVi sensors attached to both legs. As she performed squats, lunges, and jumps in every direction, the sensors sent instant information to an app displayed on a tablet, measuring how close she was to returning to soccer action.

“Numbers to look at to see and give us a better idea if these athletes are safe to return to play, or just an injury risk profile from the preventive side of it as well,” said Caroline Jaycox, a board certified sports therapist with SSM Healthcare.

Sports therapist Sara Wallingsford discussed the dorsaVi data with Nuelle. “This test is telling me that her left [leg] is actually better than her right after all this training after her few surgeries.”

Doctors concurred, and last week Nuelle was cleared to play soccer at Webster University, in her fifth and final season.

“It’s definitely going to be emotional because it’s been two years since I’ve played in a real game,” said Nuelle.

Teams in the National Football League, National Hockey League, and Major League Soccer are using dorsaVi for physical therapy and to assess the likelihood of injury.

For more information about dorsaVi, visit them online.