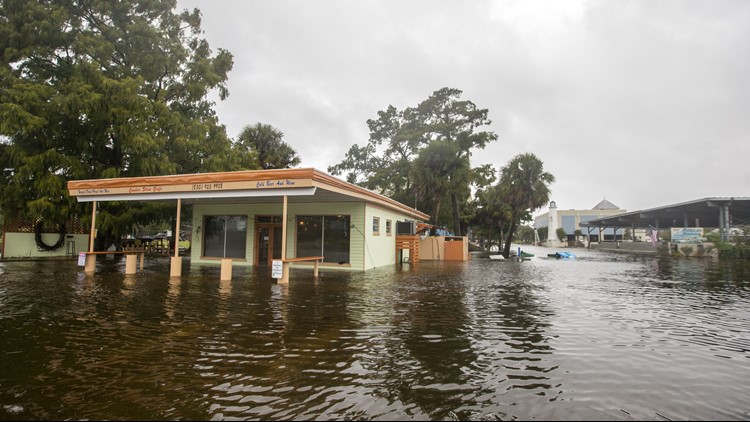 Photo by: Mark Wallheiser
SAINT MARKS, FL - OCTOBER 10: The Cooter Stew Cafe starts taking water in the town of Saint Marks as Hurricane Michael pushes the storm surge up the Wakulla and Saint Marks Rivers which come together here on October 10, 2018 in Saint Marks, Florida. The hurricane is forecast to hit the Florida Panhandle at a possible category 4 storm. (Photo by Mark Wallheiser/Getty Images) ORG XMIT: 775240672 ORIG FILE ID: 1048880908

Hurricane Michael: What you need to know in graphics

A look at the forecasts and impacts of Hurricane Michael

With 155 mph winds at landfall, Michael was nearly a Category 5 storm that smashed records as the strongest ever to roar onto the state's exposed Panhandle.

It was also the strongest October hurricane on record to make landfall anywhere in the United States.

“This morning, Florida’s Gulf Coast and Panhandle and the Big Bend are waking up to unimaginable destruction,” Florida Gov. Rick Scott said Thursday morning. “So many lives have been changed forever. So many families have lost everything. … This hurricane was an absolute monster.”

TOPSHOT - Storm damage is seen after Hurricane Michael in Panama City, Florida on October 10, 2018. - Michael slammed into the Florida coast on October 10 as the most powerful storm to hit the southern US state in more than a century as officials warned it could wreak "unimaginable devastation." Michael made landfall as a Category 4 storm near Mexico Beach, a town about 20 miles (32kms) southeast of Panama City, around 1:00 pm Eastern time (1700 GMT), the National Hurricane Center said. (Photo by Brendan Smialowski / AFP)BRENDAN SMIALOWSKI/AFP/Getty Images ORG XMIT: Hurricane ORIG FILE ID: AFP_19X5QL
BRENDAN SMIALOWSKI, AFP/Getty Images

Although weakening, Michael continued to rampage through the Southeast on Thursday before racing offshore on Friday. Flash flooding and tornadoes were possible in the Carolinas and Virginia on Thursday. Projected path of Michael:

PANAMA CITY, FL - OCTOBER 11: Amanda Logsdon begins the process of trying to clean up her home after the roof was blown off by the passing winds of hurricane Michael on October 11, 2018 in Panama City, Florida. The hurricane hit the Florida Panhandle as a category 4 storm. (Photo by Joe Raedle/Getty Images) ORG XMIT: 775241167 ORIG FILE ID: 1051882830
Joe Raedle, Getty Images

Roughly 800,000 customers were without power in the Southeast on Thursday due to Michael's ferocious winds. The vast majority of outages were in Georgia, Florida and Virginia. Counties reporting outages due to Michael, Wednesday — Friday:

The overhang of a gas station is toppled over in the aftermath of Hurricane Michael on October 11, 2018 in Inlet Beach, Florida. - Residents of the Florida Panhandle woke to scenes of devastation Thursday after Michael tore a path through the coastal region as a powerful hurricane that killed at least two people. (Photo by Emily KASK / AFP)EMILY KASK/AFP/Getty Images ORG XMIT: Hurricane ORIG FILE ID: AFP_19Y1MK
EMILY KASK, AFP/Getty Images

Michael will be remembered as one of the worst storms to hit the U.S., and will surely have its name "retired" by the World Meteorological Organization next year. The other disastrous storm this year, Hurricane Florence, will likely also have its name retired. The most powerful hurricanes to hit the continental U.S. since 1950:

Hurricane Michael made landfall with winds of 155 mph, making it a strong Category 4 storm on the Saffir-Simpson scale of hurricane intensity. It missed being a Category 5 by only 2 mph. What scale 1 to 5 looks like:

How a hurricane forms