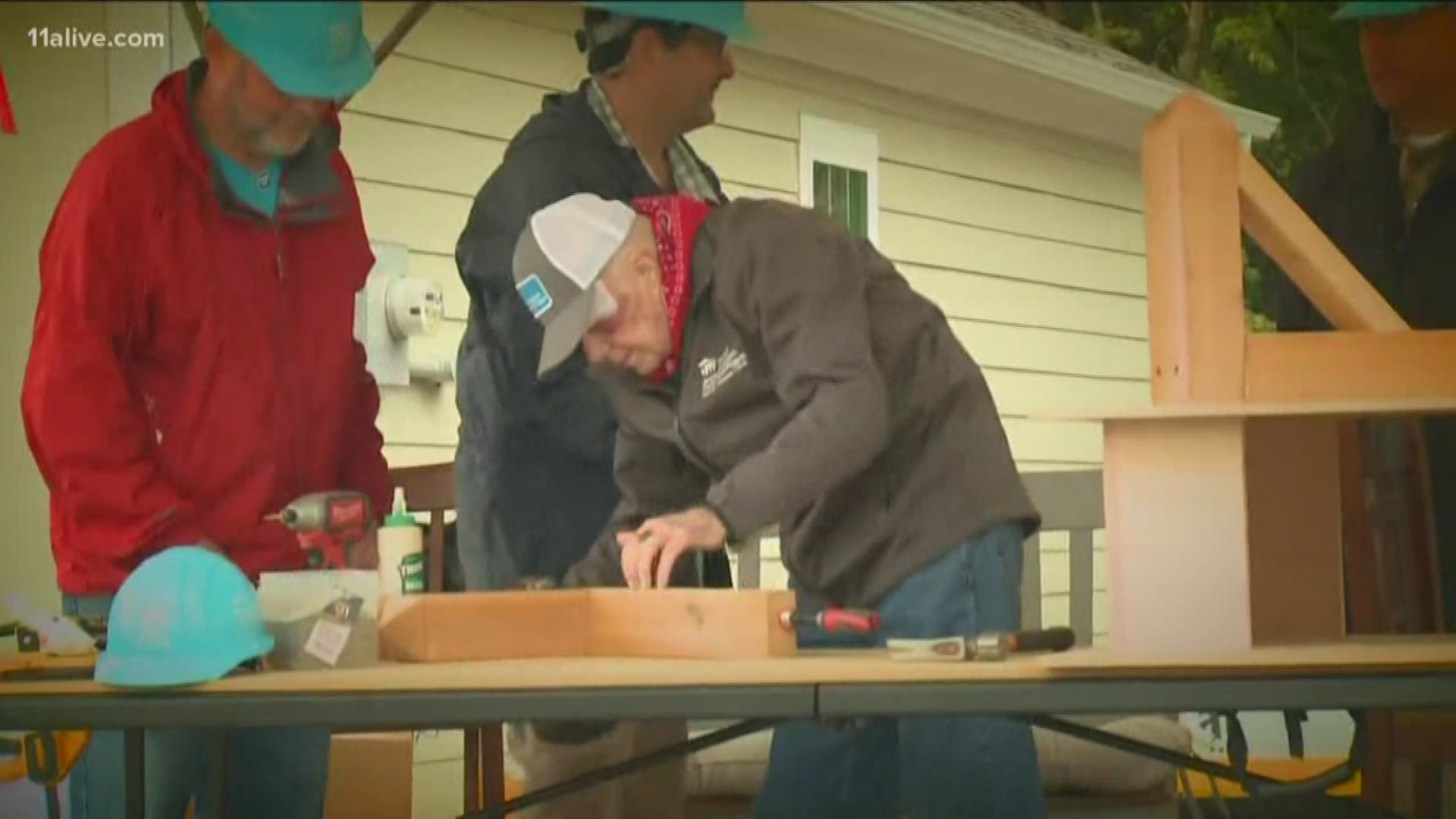 NASHVILLE, Tenn. — The hammers were swinging, and the volunteers’ efforts were underway Monday in Nashville during the Jimmy and Rosalynn Carter Work Project with Habitat for Humanity.

Two country music stars who know all about love, as well as the Carter’s -welcomed everyone with a common theme - love.

Trisha Yearwood and Garth Brooks, who are no strangers to Habitat for Humanity, opened a press conference on Monday. Brooks said he learned quickly that at this event, “everything is based on love.” He said that set the tone for the day.

Carter, sporting a black eye from a recent fall, echoed that.

"It’s nice to come to city of love after loving each other for 73-and-a-half years, right Rosa?” Carter joked.

It is the 11th time that Brooks and Yearwood have worked alongside the Carter’s building a home.

“Garth and Trisha are our two best volunteers,” Carter said. “And we’ve had 103,00 volunteers working with us on our 36 years with our Habitat work.”

“It’s always easier for the rest of us to work when Trisha and Garth are volunteering,” Carter joked. “They do all the heavy lifting.”

The week-long 36th Jimmy and Rosalynn Carter Work Project is underway in the Music City, led by two nonagenarians who have come to embody the concept of servant leadership.

Carter fell at home on Sunday, requiring 14 stitches, but he did not let his injuries keep him from participating. He turned 95 last Tuesday, becoming the first U.S. president to reach that milestone.

Building alongside hundreds of other volunteers, the former president and first lady will help construct 21 new Habitat for Humanity homes throughout the week. An additional 12 new single-family homes and 26 new townhomes will be constructed by 2021 with support of funding raised for the project. In total, funds raised through the 2019 Carter Work Project will serve 59 Nashville families.

Fellow Nashville resident and country music star Eric Paslay is also joining for his third Carter Work Project, along with his wife Natalie. They have also supported Habitat’s Home is the Key cause campaign.

Since beginning their work with Habitat for Humanity in 1984, just years after leaving the White House, President and Mrs. Carter have helped to build, renovate and repair 4,331 homes in 14 countries alongside more than 103,000 volunteers. Since Habitat’s founding in 1976, the nonprofit housing organization has served more than 22 million people around the world.

Jimmy Carter says he couldn't have managed presidency at 80