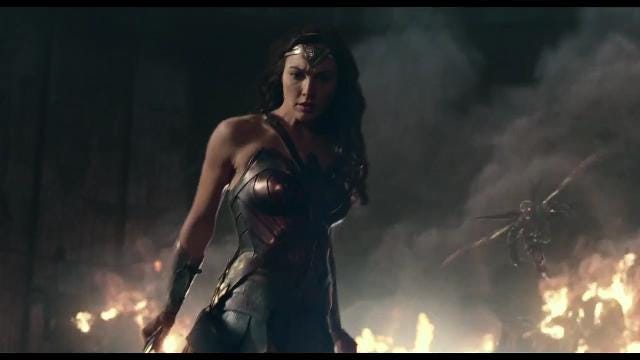 Spoiler alert: The following discusses plot points for 'Justice League,' so beware if you haven't seen it yet.

The feelings are visceral when John Williams’ 1978 Superman theme kicks in. Truth, justice and the American way, obviously. But also memories of the late Christopher Reeve, clad in blue tights and red cape, grinning and being the hero we all looked up to.

Henry Cavill's Superman introduced in 'Man of Steel' was more morose than hopeful.

That Superman, the one where the “S” shield on his chest meant something, hasn’t been seen for a while. Not until Justice League, when Danny Elfman’s score tosses in Williams’ iconic riff to accompany a smiling Henry Cavill socking a bad guy in the kisser. It feels so sweet because it was such a long time coming.

Say what you will about Justice League’s box-office misfortune, but it did resurrect the Man of Steel — in more than one way. The movie opens with a flashback of Cavill’s Superman being asked by kids to say something for their podcast. The smiling superhero — who died fighting Doomsday in Batman v Superman: Dawn of Justice — shares a bit of wisdom from his adopted dad, likening hope to a lost set of car keys: Might take a little bit, but you’ll find it.

That's not the guy we’ve been exposed to lately. In director Zack Snyder’s disappointing origin story Man of Steel, Superman talks a good positivity game but he leans gloomy — the guy’s more a symbol of sullenness than goodness who snaps the neck of his arch enemy. Reeve’s Superman wouldn’t have done that. He also probably would have eschewed epic fisticuffs with Ben Affleck’s Dark Knight in BvS, and maybe actually finished that football story for the Daily Planet he was supposed to do. (The Clark Kent in the early Superman movies seems like a man who could hit a villain and a deadline.)

Christopher Reeve became a hero for a generation in 1978's 'Superman.'

Respect Snyder for trying something new and modern with a comic-book icon but you just don’t tug on Superman’s cape quite that hard. He felt like an alien when, as Batfleck insightfully points out in Justice League, Superman “is more human than I am.” His is the ultimate immigrant story, sent from his home before it’s destroyed and raised by two loving Midwesterners to be a beacon for mankind.

Related: Ezra Miller says his Flash flat is (almost) as cool as the Batcave

That was Reeve; that wasn’t Cavill. When Supes dies in BvS, you should be heartbroken. Instead, well, too bad, but OK. Wonder Woman (Gal Gadot) became the strong-willed, good-hearted powerhouse that he hadn’t been and everybody seemed pretty cool with it.

Superman’s return, like Justice League on the whole, wasn’t a perfect one. As the Internet figured out, Cavill’s digitally erased mustache is a bit of a CGI mess. And when he gets resurrected, thanks in part to a lightning strike from The Flash, Supes is all Frankenstein’s monster, lashing out until he sees his love, Lois Lane (Amy Adams).

“He’s not all right,” Aquaman (Jason Momoa) warns the team, having already said Supes might not come back the same. In that way, the new Justice Leaguer is correct: The Man of Steel is better. He shares warm moments with Lois and his mom (Diane Lane) and even has a couple belly laughs of relief with Cyborg (Ray Fisher) after saving the day.

Also: What you need to know about the three rookie superheroes of 'Justice League'

Related: What do the Amazons think of their controversial 'Justice League' costumes?

And Cavill gives one more reason to look forward to a Man of Steel 2 — which sounded like a horrible idea until now. Clad in glasses, Clark is walking in Metropolis until trouble arises and he dashes off, ripping open his shirt in familiar fashion and showing that red “S” underneath.

It’s not new or innovative or even hip. But it is needed. Welcome home, Superman: Cue the theme.