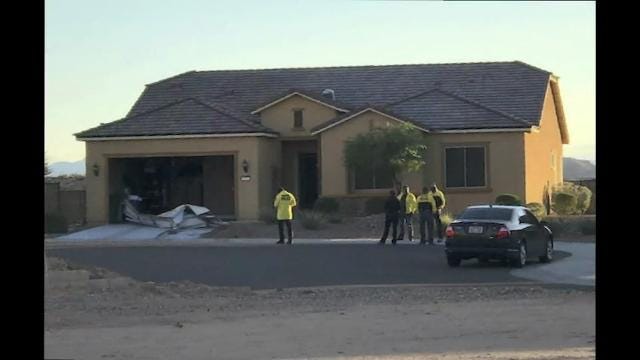 The hospitable charm of Southern Nevada may have long ago been traded for neon flamboyance in Las Vegas but, 80 miles northeast in Mesquite, it’s still a point of pride.

With a week’s worth of golf courses to play, three major casinos to gamble in, and a unique desert isolation, it’s a place many people visit to unplug for a few days. Last month, the city was host to reporters from all across the country. They flocked to Mesquite from cities like New York and Washington, D.C. They slept in the city’s hotels, ate in the city’s restaurants and, perhaps, gambled a few dollars at the city’s blackjack tables.

Barbara and Paul Benedict, members of the exchange club of Mesquite, watch over the thousand flag dedication in Mesquite, Nev. Nov. 9, 2017.

As Mesquite was suddenly thrust into the international spotlight, the journalists who were in town to report because of the heinous actions of a single man were able to enjoy all of the amenities that make Mesquite the fastest-growing city in all of Nevada.

But did they take the time to get to know the city itself?

Mesquite was inevitably tied to the Oct. 1 shooting that claimed the lives of 58 concertgoers on the Las Vegas Strip. The normally quiet community became known to the rest of the country as shooter Stephen Paddock's “home.”

“People’s first reaction is, ‘What kind of people do you have living there? Are you afraid to live there now? Are you sorry you moved to Mesquite?’” recalled nine-year resident Sandra Ramaker upon waking on Oct. 2 to a list of messages from friends and relatives in Oregon and Washington.

If you ask around town, you won’t find anyone who knows much about the man who decided to open fire at the Route 91 Harvest music festival. He lived — but only for a few months —in Mesquite’s Sun City community with his girlfriend, he liked to gamble, and he bought some guns at a local gun store. He wasn’t an active member of any community group. He was a mystery even to his two neighbors on the cul-de-sac of Babbling Brook Court, as evidenced by a note posted on the front door of one home that requested privacy and stated that they didn't know him.

It’s easy to see why residents of Mesquite would take issue with suddenly becoming synonymous with a person that didn’t represent any part of the community.

“No one in Mesquite likes to admit in their hearts that the person that did this lived here. We don’t want to be associated with that person or what he did,” said Paul Benedict, a member of the Exchange Club of Mesquite.

His wife, Barbara, is president of the Exchange Club that annually displays One Thousand Flags Over Mesquite in the week leading up to Veterans Day.

It’s a tradition that is uniquely Mesquite. For 12 years, One Thousand Flags Over Mesquite has been a way for the city — which proudly calls itself home to a large veteran population — to say ‘thank you’ for the freedoms enjoyed by its citizens.

In the early morning of a perfect autumn day in November, a husband and wife walked through the rows of American flags planted in an open field adjacent to the Mesquite Recreation Center. In a simple but moving tribute, the couple deliberately walked past each of the 1,000 flags that memorialize those who gave their life in defense of the American Dream.

The first two rows of the 300x33 field of American flags have been dedicated to the victims of the Las Vegas shooting. Fifty-eight flags have an individual name and photo — one for each person who was killed. Another flag is a tribute to the wounded, and there's another for the first responders.

“You can’t atone, all you can do is open your heart and say we feel bad that somehow Mesquite has a connection to all this,” Benedict said.

Read more: How police zeroed in on the Las Vegas gunman

Read more: Here are all the victims of the Las Vegas shooting

Benedict said the idea came from Peggy Purner, a veterinarian in Mesquite and member of the Exchange Club. Benedict said the Exchange Club was sensitive about protecting the ideals of One Thousand Flags Over Mesquite. The town has adopted the vigil, now being displayed in its 12th year, as part of Mesquite’s identity. The week-long display culminates in a final ceremony honoring America’s veterans. Benedict said honoring the innocent lives lost remains true to the spirit of the display.

“We want to make sure we don’t take away from the overall reason for that field, for those who have given their all for our country — our military and our veterans. And these folks did, too, by simply participating in one of the activities that our freedoms allow,” Benedict said.

Benedict said just putting the tribute together brought him closer to the tragedy. He scoured the internet himself to read the stories of each of the 58 victims. He found 58 pictures and learned 58 names. He made 58 individual cards and placed them on 58 flags.

He said he's observed countless visitors do the same — taking time to read the names and see the faces of each of the 58 victims, including Cameron Robinson of St. George and Heather Alvarado of Cedar City.

One month after the tragedy, the tribute has generated some positive headlines for the city. A local news station in Las Vegas picked up the story and broadcast it. Benedict said the following day family members of one of the victims drove to Mesquite from Las Vegas to see their loved one’s name. They asked to take the flag home with them, which Benedict wasn’t expecting.

The Exchange Club was pleased to do so, he said. They asked that the family wait until week’s end, after the final ceremony, to take the flag. The family obliged and were invited to attend the ceremony. Benedict said that all 58 flags paying tribute to the victims will be available to their families.

Now, a small field in Mesquite was going beyond city limits to reach peoples’ lives.

“We had a couple yesterday who were here to play golf for a couple days and they were on their way back to Canada today and they came up to me and they said, ‘You know, there are four Canadians there.’ That was pretty powerful,” Benedict said.

A group of survivors from the music festival traveled to Mesquite to visit One Thousand Flags Over Mesquite, and left orange ribbons which have come to symbolize the bond they’ll now share for life.

It remains to be seen what — if any — lasting ramifications the tragedy will have on Las Vegas and Mesquite. Las Vegas Convention and Visitors Authority Communications Manager Maria Phelan said the LVCVA has not noticed any convention cancellations since the shooting.

But, a Wall Street Journal article published Nov. 10 shows travel bookings to Las Vegas have declined since the shooting.

The incident will inevitably cause some blowback, but there are plenty of distractions in Las Vegas. In Mesquite, it may not be as easy to move past such misconceptions.

Chris Sullivan, general manager of Guns & Guitars in Mesquite, said media requests persisted nearly three weeks after the shooting occurred. The shooter purchased a gun at Guns & Guitars the week before the incident, but it was not among the arsenal he amassed inside his 32nd-floor suite at the Mandalay Bay. Still, Sullivan said he received hate mail from across the country. For a while, he kept guards outside the store.

Sullivan was relieved that none of the harassment came from within Mesquite.

“Local support has been fantastic. (We) had a large amount of hate and threats from other parts of the country but none from here,” he said. Sullivan said even people who don’t own guns were reaching out to express their support.

Read more: Timeline: How Congress has responded to mass shootings

Mesquite is more accurately defined by its innate support system than by this single man.

There’s the example of Koko Davis, a basketball coach who is paralyzed from the waist down. Beloved by his players and needing a wheelchair accessible vehicle, an auction and benefit dinner was held in March to raise money.

Davis recalled being on the verge of tears the night of the auction. One person, whom he had never met, paid $500 for chocolate covered strawberries. Golf packages were being sold for $700. In just a few hours, residents raised $55,000. The total cost of the modified truck was $62,000.

"Honestly, I don’t even know 90% of the people that donated. That might be a random number, but I don’t. I don’t know who donated, really," he said. "And it’s kind of frustrating because you want to be able to thank everybody. But I guess, from talking to my brother Dan, my way of thanking everybody is to keep coaching and giving back."

Many people who didn't even know Davis banded together to make his life easier.

"I can come and go when I want to now and I don't need anybody to help me," Davis said.

Just a few weeks ago, Davis saw the community do the same thing for someone else. During a fundraising auction at the Rising Star Sports Ranch for Virgin Valley High School's new gymnasium, the auctioneer paused to bring Denton Dorn on stage. Dorn is a student at VVHS and was raising money himself for a trip to Seattle to take part in the Special Olympics.

"Who is willing to donate $20 for Denton's trip?" the auctioneer asked.

"I’m almost choked up talking about it. Everybody in the room, this huge banquet room, raised their hand," Davis said. "Selfless, I guess, is the word I would use for Mesquite."

"When people need something, we come together," Ramaker said. "When somebody needs something, somebody finds a way to make it happen, it’s just that way.”

So, to answer those questions she received on Oct. 2, will she be looking for a new place to live?

“No, not at all. Just because somebody did something, this isn’t my town. This isn’t the way people are here,” Ramaker said.

“I had always been a big-city girl, I moved to a small community. I didn’t know how I was going to do. I absolutely love it. I have no desire to leave here. I think the people here for the most part are giving and warm people ... You go out and you show them the need for it, and people get together and make it happen. And they don’t do that in big towns, it’s not that way.

"This town’s got a heart, it really does,” she said.