Olaf 'Frozen' short is an ‘Adventure’ worth taking 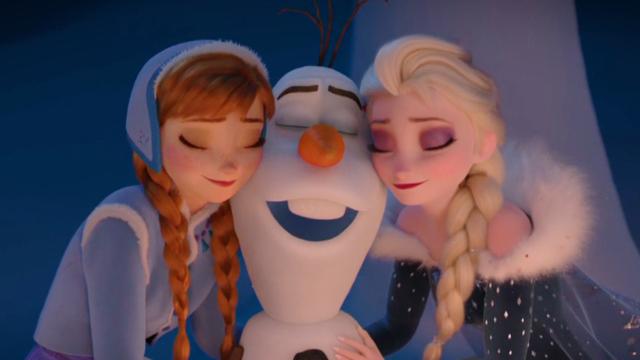 For the first time in forever, a new Frozen film is chilling the big screen.

If you’re planning to visit Disney/Pixar’s Mexico-set Coco in theaters this Thanksgiving, you’ll want to get there right on time so you don’t miss another musical excursion to the kingdom of Arendelle in Olaf’s Frozen Adventure.

Olaf (voiced by Josh Gad, center) teams up with Sven on a mission to find holiday traditions in 'Olaf's Frozen Adventure,' playing in front of the theatrical release of Pixar's 'Coco.'

The 21-minute short brings back all of your favorite characters from Disney’s 2013 mega-hit Frozen, who last congregated two years ago in the animated short Frozen Fever, which played before the Mouse House’s live-action Cinderella.

More: Olaf tapped to debut as a balloon in the Macy's Thanksgiving Day Parade

When the story picks up, Princess Anna (voiced by Kristen Bell) and Queen Elsa (Idina Menzel) are preparing their castle for the holidays, only to realize that Elsa’s icy powers prevented them from starting any family traditions before their parents died. Determined to bring the royal sisters cheer, snowman pal Olaf (Josh Gad) and reindeer Sven set off to find festive customs they can adopt as their own, filling a sled with candy canes, dreidels and fruitcake, among other wintry trinkets.

But when his merry knickknacks literally go up in flames and off a cliff, a disheartened Olaf gets separated from Sven and chased into the snowy forest by wolves. With the help of ice harvester Kristoff (Jonathan Groff), Elsa and Anna find their carrot-nosed creation and remind him that he is actually their holiday tradition.

Delighted, Olaf joins them around a frosty tree for When We’re Together, one of four original tunes included in the film and a warm reminder of what the season is all about.

To kids’ possible dismay (but parents’ great relief), none of the short’s new music is quite memorable enough to become the next Let It Go-size sing-along. But all in all, Olaf’s Frozen Adventure is a sweet and funny supplement to tide fans over until Frozen 2 hits theaters Nov. 27, 2019.