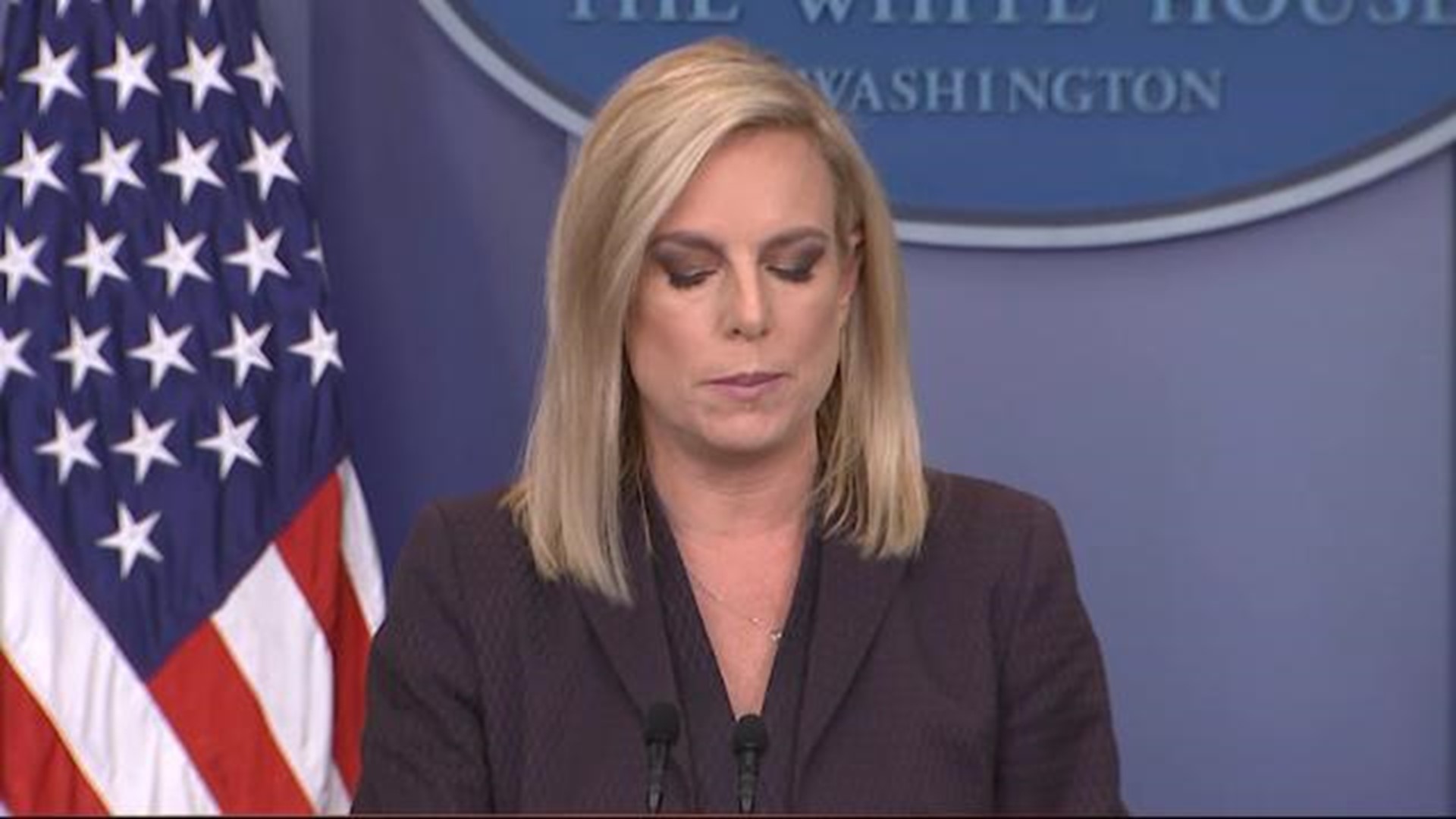 Texas and Arizona officials are deploying a total of 400 troops to the Mexican border, just days after President Trump's order aiming to stop illegal crossings and drug trafficking, they said Friday.

The states made their announcements as Trump and aides ordered law-enforcement officials to redouble efforts to enforce a zero-tolerance policy on illegal border crossings and an end to the so-called "catch and release" program that allowed immigrants into the U.S. while awaiting court hearings. The moves signaled the Trump administration is cracking down even further at the Southwest border.

Defense Secretary Jim Mattis signed an order Friday night that authorizes his department to pay for up to 4,000 National Guard personnel through Sept. 30 to aid Border Patrol at the Mexican border. It did not mention the cost.

Texas and Arizona are the first to deploy guardsmen since Trump's call for 2,000 to 4,000 National Guard members earlier this week.

"This mobilization supports the priorities of the governor and the president in securing our border," said Tracy Norris, deputy adjutant general of the Texas Military Department, which oversees the state's National Guard branches.

In total, Mexico and the United States share a 1,933.4-mile boundary.

The 250 armed troops are only the beginning, Norris said. A second phase of National Guard members is to be deployed as early as next week.

She did not say the total number that would be sent, nor was it immediately known whether they would have the power to arrest migrants crossing illegally. Mattis' order states that National Guard personnel will not engage in law enforcement or interact with detainees without further approval, and the troops will be armed only in circumstances that might require self-defense.

Following Norris' remarks, two military helicopters with troops inside took off from the Armed Forces Reserve Center in Austin, Texas — the first sent since Trump's directive. Along with the troops, vehicles, aviation crews and other equipment were being sent south.

As part of a prior directive from Texas' governor, 100 National Guard members already guard the border, Norris said. She estimated that the state pays less than $1 million a month to keep troops now serving there.

She did not have details on what the Texas portion of this new venture would cost but added it was a federal directive.

"This is a federal response that is managed by the state," Norris said.

So U.S. taxpayers will foot the bill. When President Obama ordered the deployment of 1,200 National Guardsmen to support the Border Patrol in 2010, the program cost $110 million in its first year.

"Our office is working closely with @AZNationalGuard, @DeptofDefense and @DHSgov on plans to deploy approximately 150 national guard members to the border next week," Arizona Gov. Doug Ducey announced on Twitter.

No additional information was immediately available about the state's plans, nor were details about its cost announced.

Our office is working closely with @AZNationalGuard, @DeptofDefense and @DHSgov on plans to deploy approximately 150 national guard members to the border next week

The National Guard is more often deployed domestically under the control of state governors for disaster response.

Earlier Friday, the White House press secretary, Sarah Sanders, was asked about specifics of the order and when troops would be deployed.

"We're working with states' governors right now to go through this process, and we hope to have National Guard on the ground as soon as possible," she said, adding the administration had no timetable.

On Wednesday, Trump formally ordered the Pentagon and Homeland Security to deploy members of the National Guard to the Southwest border. The announcement came after Trump was infuriated seeing a caravan of more than 1,000 migrants from Central America that planned to travel together to the U.S. border.

"The situation at the border has now reached a point of crisis," the president’s memo said. "The lawlessness that continues at our Southern border is fundamentally incompatible with the safety, security, and sovereignty of the American people. My administration has no choice but to act."

The following day, he gave more details of the plan aboard Air Force One: 2,000 to 4,000 troops would be called up, and they might be sent there for an indefinite period.

The renewed emphasis on border security came just weeks after Trump signed a spending bill that did not include money for his border wall.

The number of people caught trying to illegally cross the Southwest border in fiscal year 2017 was 303,916, the lowest since 1971. Those numbers continued to fall in the first six months of fiscal year 2018, which began Oct. 1, according to statistics from U.S. Customs and Border Protection.

Attorney General Jeff Sessions said Friday that those who cross the border will "be met with the full prosecutorial powers of the Department of Justice."

The White House also announced the end of the "catch and release" program that allowed many undocumented immigrants caught by agents to be released in the United States and ordered to reappear for court hearings.

► May 4: Floods threaten parts of Arkansas, Missouri as National Guard steps in
► October 2016: California National Guard won't have to pay back bonuses

Some lawmakers criticized Trump's idea of sending troops to the border, saying it would be a waste of military resources and a political gesture at best.

Rep. Raul M. Grijalva, D-Ariz., called it "the latest chapter in his reign of terror meant to wreak havoc on immigrants and residents of border communities. After his failure to secure funding for his 'big beautiful wall,' he is clearly grasping for straws."

1 / 7
David Wallace, The Republic via USA TODAY NETWORK
Jacqueline Hackney (left) and her daughter, Tiffany Hackney, 13, (right) both of Corona, Calif., cheer during a rally in support of President Trump a few miles form where he will visit the border wall prototypes near the Otay Mesa Port of Entry in San Diego, Calif., later in the day on March 13, 2018.