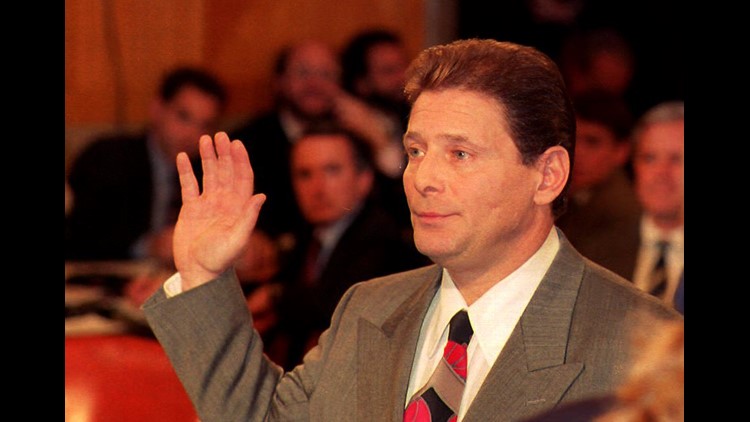 Salvatore "Sammy the Bull" Gravano, a former member of the Gambino family, prepares to testify 01 April, 1993 about corruption in the sport of professional boxing.

Former Mafia hit man and turncoat Salvatore "Sammy the Bull" Gravano has been released from prison after serving most of a 20-year sentence for overseeing an Arizona Ecstasy ring.

Gravano, 72, had been serving concurrent terms issued for drug-related convictions on federal charges in New York and state charges in Arizona.

Thomas Farinella, an attorney for Gravano, said he was released Monday.

In an article quoting Gravano's daughter and attorney, the New York Post reported Wednesday that the former mob underboss was paroled from an Arizona prison.

Farinella would not divulge where his client was most recently incarcerated or where he plans to live.

Andrew Wilder, a spokesman for the state Department of Corrections, said Gravano was released from the state prison system in 2016 but had remained incarcerated federally until this month.

U.S. Bureau of Prisons officials could not be reached to clarify where Gravano most recently served time.

While serving as an underboss with New York's Gambino crime family, Gravano took part in 19 homicides and oversaw a vast enterprise of extortion, fraud and other felonies.

Targeted by the FBI, he took a plea deal with a five-year sentence and turned on his associates, helping convict John Gotti and other top figures in La Cosa Nostra.

Gravano put out a book about his life, then went underground in Arizona as a federally protected witness with a new name, an Italian restaurant and a construction company.

The Arizona Republic discovered and interviewed Gravano about his secret life in 1999, when he told the newspaper, "You can't change what you are inside. A leopard doesn't change his spots."

Months later, state investigators swept down on the drug syndicate headed by Sammy the Bull and his son, Gerard. The Ecstasy ring was said to be the largest ever uncovered in Arizona. Federal authorities subsequently charged Gravano with multiple crimes also related to that enterprise.