The Texas Senator arrived back in Houston after a quick trip to Cancun for which he was roasted on social media. 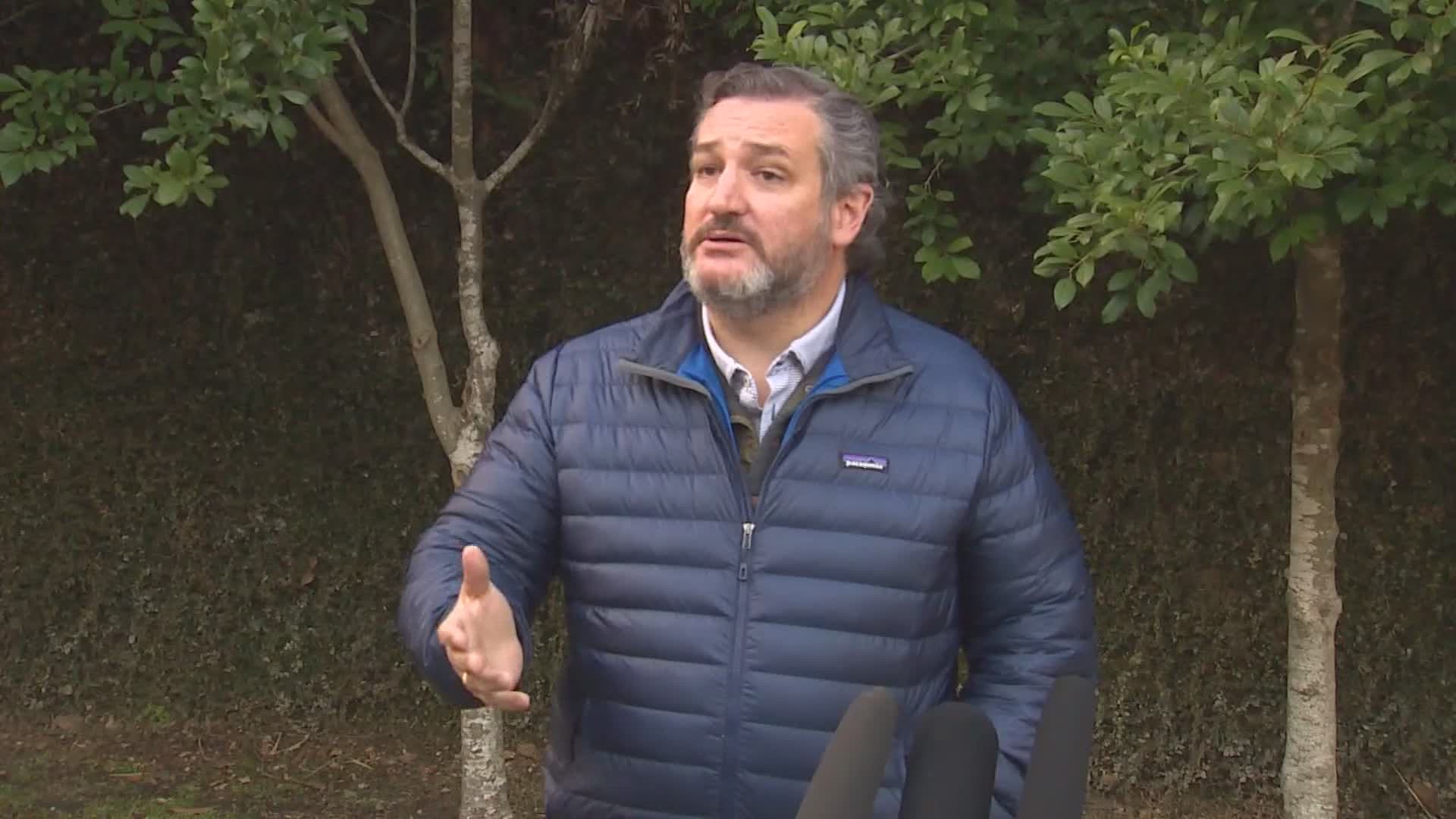 HOUSTON — Texas Sen. Ted Cruz is taking heat after flying to Cancun as his home state suffers through a deadly winter storm crisis.

He arrived back in Houston Thursday to a political storm.

A handful of protesters with signs were waiting to greet Cruz outside his Houston home.

He was roasted on social media once photos of him on an airplane started to circulate.

Millions of people across the state have coped with no power during bitter cold weather, followed by busted pipes and low -- or no -- water pressure.

Cruz admitted he flew to Cancun but said he was just being "a good dad."

“I have to admit, I started having second thoughts almost the moment I sat down on the plane because, on one hand, all of us who are parents have a responsibility to take care of our kids, take care of our family. That’s something Texans have been doing across the state," Cruz said outside his home. "But I also have a responsibility I take very seriously and that’s fighting for the state of Texas and frankly, leaving when so many Texans were hurting didn’t’ feel right, so I changed my return flight and returned back."

Statement from U.S. Sen. Ted Cruz on his vacation trip to Cancun, Mexico during the #TexasBlackout. pic.twitter.com/tCbGMieVoz

KHOU 11 confirmed that he was originally scheduled to return with his family this weekend before deciding to cut the trip short.

KHOU 11 reporter Matt Dougherty was at the airport Thursday when Cruz landed and captured this video.

In his earlier statement, he said the trip was for his daughters and their friends.

"With schools cancelled for the week, our girls asked to take a trip with friends. Wanting to be a good dad, I flew them down last night and am flying back this afternoon. My staff and I are in constant communication with state and local leaders to get to the bottom of what happened to Texas. We want our power back, our water on and our homes warm. My team and I will continue using all our resources to keep Texans warm and safe."

An AP source with knowledge of the situation earlier said the trip was "long-planned."

The Texas senator also spoke with the media before boarding his flight at the Cancun airport.

Reuters has acquired a photo of Ted Cruz at the Cancun airport today on his way back to Texas.

Notice how he’s wearing a mask with the Texas State flag on it. pic.twitter.com/Tdl6msfPBx

"Go home and keep working to sthe grid reopened, to get power restored, to get water back on," Cruz said. "A lot of Texans are hurting and this crisis is frustrating. It's frustrating for millions of Texans. It shouldn't happen."

Houstonians we talked with believe the Republican senator shouldn't have left during the crisis.

"My thinking was the captain of a ship you know the last guy that leaves the ship is the captain," one man told us. "Him leaving to Mexico in this sitaution, that's not good at all. Doesn't tell me he's a guy who's intersted in the peope of his town."

"I can't even say what I want to say," another Houston resident said. "It is what it is, but 'hey bro, we need help down here. You're out there having fun in Cancun and we're out here freezing. If you want to be elected, better do something.'"

Both men say their families lost power, which has since been restored but they still don't have water.

Guess which US Senator from Texas flew to Cancun while the state was freezing to death and having to boil water? pic.twitter.com/fNY00EmMMR

With Texans heated and the rest of the country shaking their heads, hundreds of snarky tweets are making the rounds on Twitter.

"HEARTBREAKING: One Texas resident had to travel over 1700 miles to find heat, water and electricity."

HEARTBREAKING: One Texas resident had to travel over 1700 miles to find heat, water, and electricity. https://t.co/WwbVgp2BcI

And from journalist and Texas native Dan Rather: "There's an old Texas saying: When the going gets tough, the tough go to Cancun. (No, there actually is no such saying)."

Cruz is the same senator who criticized Austin's mayor for taking a vacation to Mexico in the middle of the coronavirus pandemic, KVUE reported.

There's an old Texas saying: When the going gets tough, the tough go to Cancun. (No, there actually is no such saying).

"Hypocrites. Complete and utter hypocrites," Cruz tweeted on Dec. 2. "And don't forget @MayorAdler who took a private jet with eight people to Cabo and WHILE IN CABO recorded a video telling Austinites to "stay home if you can...this is not the time to relax."

Let’s be fair. Dunking on Ted Cruz is sort of like dunking on a 3-foot rim.

"I got no defense," Cruz admitted on Twitter. "A blizzard strikes Texas & our state shuts down. Not good."

A blizzard strikes Texas & our state shuts down. Not good.

How #TedCruz left his office to pretend he's at work while travelling to Cancun pic.twitter.com/i6RYesc8eV

Cruz was recently criticized for after the Capitol insurrection that left six dead, including a Capitol police officer.

Many blamed Cruz for playing a part in inciting the mob that stormed the Capitol by repeating former President Trump's lies that the election was stolen. Thousands signed a petition that called for his resignation and President Biden said he should be voted out of office.

In an interview with KHOU 11, Cruz condemned the rioters and called Trump's rhetoric "reckless," but denied that he himself shared any of the blame. 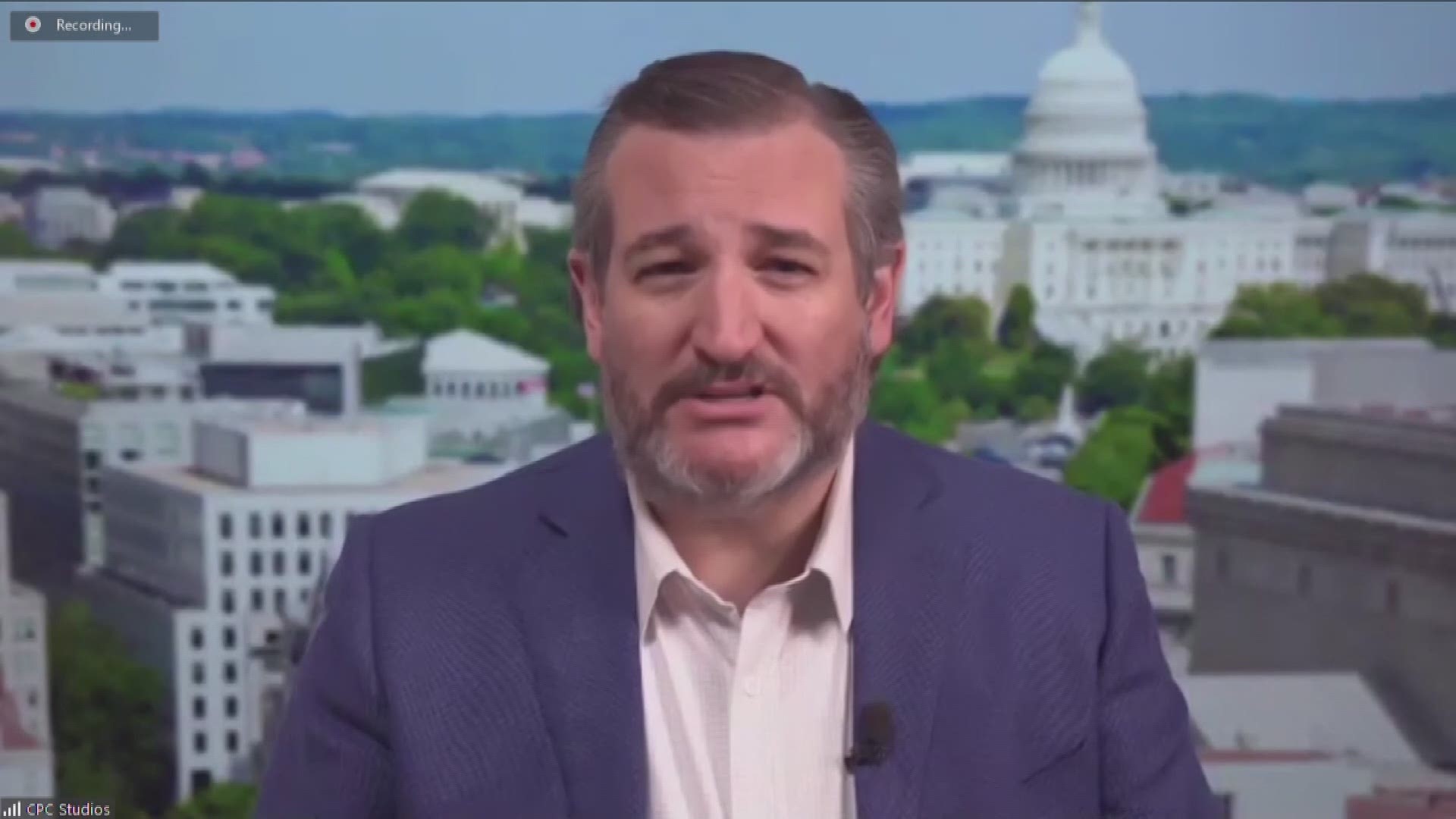 The Cancun trip opens Cruz up to more heated criticism in his home state and beyond as he contemplates the possibility of a second presidential run in 2024.