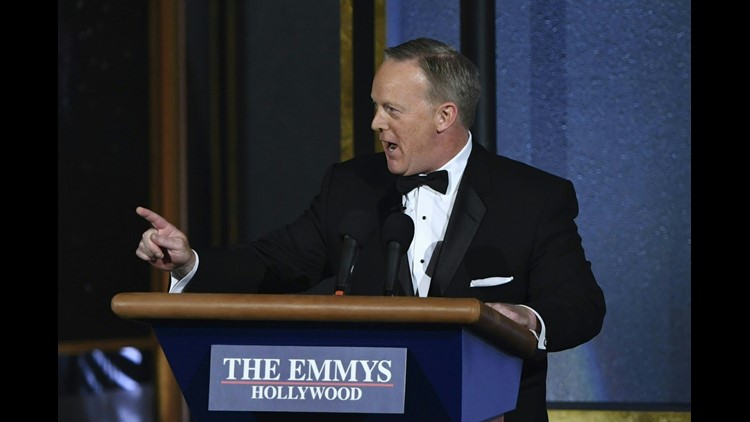 Sean Spicer made a surprise cameo at the Emmy Awards

Sean Spicer made a surprise appearance at the 69th annual Emmy Awards Sunday.

Shortly after his political monologue and a few jokes about last year's election, show host Stephen Colbert launched into a brief explanation of how politics have impacted television.

One show definitely influenced by Trump? SNL. In addition to Baldwin's Trump skit, the show has also featured Melissa McCarthy as Spicer.

So, of course, Spicer took the stage at TV's biggest night.

.@seanspicer borrows @melissamccarthy's podium for a surprise appearance at the #Emmys pic.twitter.com/xGOezHygVa

"Is there anyone who can say how big the audience is? Sean, do you know?" Colbert asked before Spicer appeared.

"This will be the largest audience to witness the Emmys period, both in person and around the world," Spicer said from behind his usual podium. The bit subtly slammed the Trump administration's claims about the size of the crowd at the inauguration in January.

But Colbert didn't miss a beat — or a chance to make a joke.

"Melissa McCarthy, everybody," Colbert said as Spicer waved to the crowd.

Twitter was just as surprised as the stars in attendance.

Some people were loving it.

The reactions to Sean Spicer were better than Sean Spicer #Emmys pic.twitter.com/KTBZwVwXCM

Others couldn't believe it.

Let's just sit back and take in the fact that Sean Spicer went from Press Secretary to in-person Emmy punchline in less than a year pic.twitter.com/ip3N53Vh1M

All others could do is laugh.

that spicer moment tho #Emmys2017 pic.twitter.com/Ku8UVLTzZn