The majority of guardsmen are citizen soldiers, sacrificing their time to serve others. More than 15,000 soldiers will be at the ready to help at the inauguration. 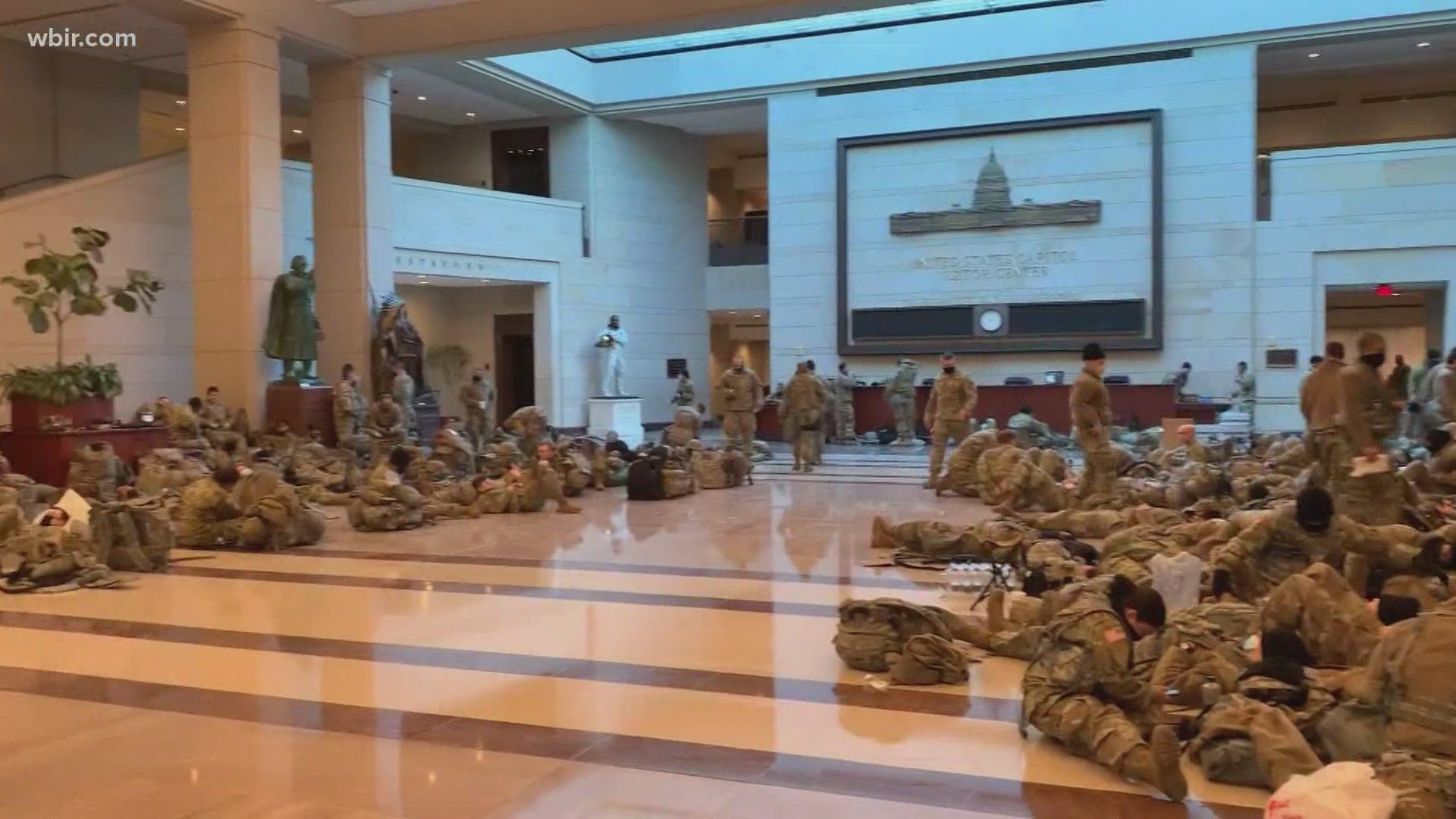 KNOXVILLE, Tenn. — The National Guard is beefing up protection at the Capitol building in Washington D.C. Pictures circulating on social media show soldiers sleeping on the marble floor with their weapons.

With the inauguration one week away, security is top of mind. Tens of thousands of guardsmen and women are expected to be deployed to D.C. over the next week to help prepare for the national event.

"There are more people in the National Capitol Region right now, guardsmen, than there are in Afghanistan and Iraq," retired Major General Max Haston said.

Pictures of National Guard soldiers sleeping on the floor of the capitol in DC is a stark reminder for MG Max Haston.

"In the 1960s, after Dr. King was killed, I got pictures of my father sleeping on the floor of the Parthenon in Nashville," Haston said.

He said it's in a soldier's nature to rest when they can, so it is not unusual to see soldiers resting on the floor.

"I mean, when you get called in, you adapt, you go to where you're supposed to go, and you stand your station," he said.

Haston was the 75th Adjutant General for Tennessee, which means he was the senior officer over the National Guard.

The majority of those guardsmen are citizen soldiers, sacrificing their time to serve others. Only about 20% of people employed through the National Guard are considered full-time.

"They do a lot more training than just two weeks in the summer and one weekend a month," Haston said.

The National Guard has two forces: Army and Air. They are the primary combat reserve for the Army and the Air Force.

"The Army and the Air Force cannot go to war today without the National Guard," Haston said. "They are built into our national defense structure, and our national command plan."

The National Guard has a long history of helping with emergencies. The first regiments in North America were organized in Massachusetts in 1636 to better defend the colony. Those regiments are the oldest units in the U.S. military.

The pandemic and current civil unrest is no exception when it comes to stepping up and helping out.

"We're the oldest with the oldest force with older service to tap there," Haston said. We were the minutemen."

In the past, TNNG soldiers have helped at the inauguration, handling crowd control and traffic flow.

This year more than 15,000 guardsmen will be ready to help as needed.

"There will be more camouflage uniforms in Washington DC than there are suits, let me put it like that," Haston said. "But I will tell you, they will be QRFs, or quick reaction forces, set up in D.C. and those soldiers will be will be armed, more than likely with non-lethal weapons."

Haston has faith in those sleeping soldiers and their sacrifice for the country.

The Tennessee National Guard has been invited to help with the inauguration. 10News is still waiting to hear back on how many troops will be sent from the state.

HOW THE NATIONAL GUARD WORKS

There are guardsmen in 54 U.S. states and territories.

In Tennessee, there are 83 armories spread out across the 95 counties, with three major training sites.

Each state and territory has both the Army and the Air National Guard. They are under command of their governors.

"They normally drill one weekend a month and they do annual training two weeks in the summer, but I cannot recall guardsmen serving that little of time," Haston said. "They are constantly called up for something, whether it's serving for an act of nature, a tornado, flood or whatever — whether it's civil unrest, whether it's supporting the state with COVID-19 testing, or whatever. So they do a lot more training than just two weeks in the summer and one weekend per month."

The guard is divided up, though. There are different statuses guardsmen can serve. If a person is drilling on the weekends, if they're going to annual training, they're on "U.S. code title 32" status, which means they are under the command of the governor for their state.

If they are mobilized and called up to active duty, they fall under "U.S. code title 10." Under that code, they would then fall under the command of the President of the United States.

Guardsmen can be called up in state active duty, where the state of Tennessee funds their pay and allowances. At that point, the guardsmen would stay under the command of the governor.