Trump used his prime-time address to lay out his case for re-election and highlight his accomplishments, Speaker Pelosi ripped up the speech as he finished speaking.
Author: TEGNA, Associated Press
Published: 2:17 AM CST February 4, 2020
Updated: 10:54 PM CST February 4, 2020

WASHINGTON — President Donald Trump delivered his State of the Union address Tuesday and leaned hard on the strong U.S. economy as he made the case for his reelection.

His speech came at an extraordinary moment, on the eve of a Senate vote on his impeachment, where he is expected to be acquitted and become the first president with that stain on his record to actively campaign for a second term. The tension in the room was clear, including an icy exchange with House Speaker Nancy Pelosi.

Trump is the first president to run for reelection after being impeached. He used his prime-time speech to lay out his case for a second term. Trump spoke in the well of the House of Representatives on the opposite side of the Capitol from where the Senate the next day was expected to acquit him largely along party lines.

As soon as Trump finished his State of the Union address, Pelosi ripped her copy in two.

RELATED: Nancy Pelosi rips up President Trump's speech at end of State of the Union

Conservative talk radio host Rush Limbaugh was also awarded the Presidential Medal of Freedom during the speech, the nation's highest civilian honor. The medal was placed around his neck by First Lady Melania Trump.

RELATED: Rush Limbaugh awarded Medal of Freedom at Trump's State of the Union

Chief Justice John Roberts was among four justices in the House of Representatives for the State of the Union speech. Roberts has presided over Trump's Senate impeachment trial. He has never missed a presidential address to Congress since joining the court in 2005.

Roberts' predecessor was Chief Justice William Rehnquist, who rarely showed up for presidential speeches. Rehnquist skipped the State of the Union speech President Bill Clinton delivered during his Senate impeachment trial in 1999.

The address, as always, happened in the chamber of the House of Representatives. The House impeached Trump in December.

House Democrats say Trump abused his power by withholding military aid to Ukraine while demanding an announcement from its president to conduct an investigation into his political rivals, namely former Vice President Joe Biden. Democrats also say he obstructed Congress' ability to investigate the allegations.

RELATED: Family surprised by military homecoming during State of the Union speech

Republicans in the Senate have made it clear they won't convict him, but some have said the House proved its case and they have conceded Trump did what he's accused of.

Pelosi sat behind the president, just a few feet away.

The White House said he was expected to talk about his accomplishments in office, but they didn't predict whether Trump would stick to his script. The president has a deep and often-stated sense of grievance, and was in the room with people he has raged about on Twitter and elsewhere.

Some of the Democratic presidential candidates were not at the address. They were in New Hampshire campaigning for the next primary contest to be held Feb. 11. 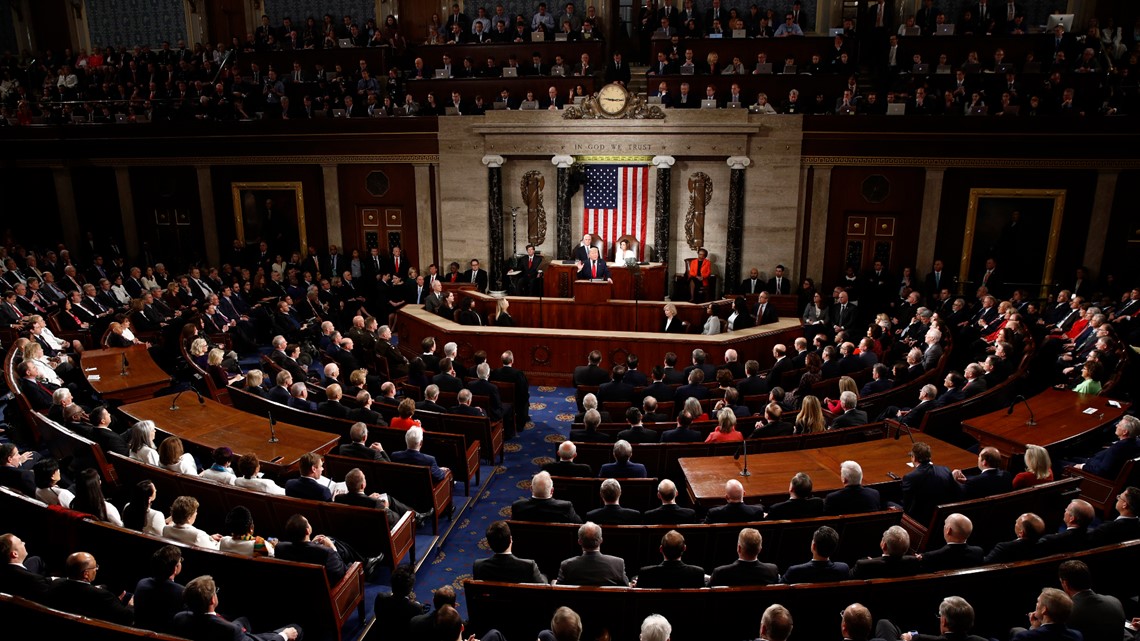 RELATED: Pelosi shrugs off not getting handshake from Trump at State of the Union address

RELATED: Nancy Pelosi wore her Mace of the Republic brooch to the State of the Union. Here's what it means

RELATED: Democratic Congresswomen to wear white at State of the Union to honor suffrage movement

Michigan Gov. Gretchen Whitmer gave the Democratic response. Out of 4.8 million votes cast in Michigan in the 2016 election, Trump beat Democratic nominee Hillary Clinton by about 11,000. Whitmer's selection has led to increased speculation that she could be a pick for the vice presidential nomination, though she says she is not interested.

Earlier Tuesday the White House excluded CNN from its annual off-the-record briefing with television news personalities prior to the State of the Union address. The action took place without public protest from CNN or other journalists, and no one boycotted the event to support CNN.

That stands in contrast to an event in Britain this week, where several journalists walked out of a briefing planned by Prime Minister Boris Johnson's administration in objection to colleagues being barred. CNN's Wolf Blitzer and Anderson Cooper attended the event last year. The network has been Trump's favorite target in his complaints about journalists.