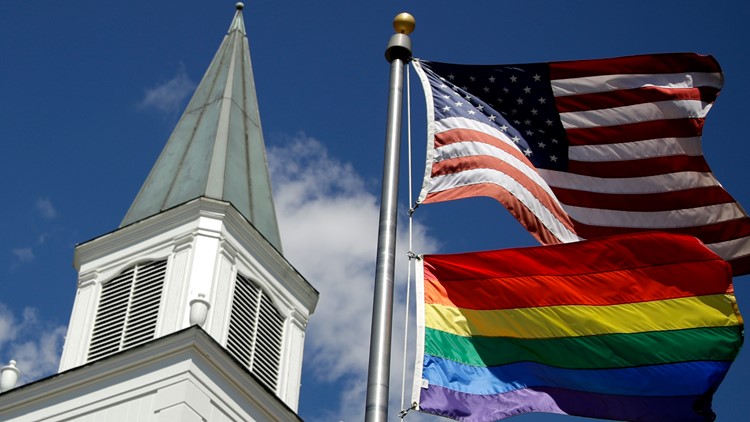 Photo by: AP
FILE - In this April 19, 2019 file photo, a gay pride rainbow flag flies along with the U.S. flag in front of the Asbury United Methodist Church in Prairie Village, Kan. On Friday, April 26, 2019, the United Methodist Church's judicial council upheld the legality of major portions of a new plan that strengthens the denomination's bans on same-sex marriage and ordination of LGBT pastors. (AP Photo/Charlie Riedel)

The United Methodist Church has announced a proposal to split following an impasse over the debate on gay marriage and LGBTQ inclusion in the church, The Washington Post reports.

The proposed plan would divide the third-largest religious denomination in the U.S.

Leaders of the church unveiled their proposal Friday for a "traditionalist" Methodist denomination to split off from the United Methodist Church.

The proposal, called “A Protocol of Reconciliation & Grace Through Separation,” envisions a separation in which conservative churches forming a new denomination would retain their assets. The new denomination also would receive $25 million.

If approved, the traditionalist denomination would continue to oppose same-sex marriage and prohibit LGBTQ individuals to be ordained clergy. The remaining portion of the Methodist church would then be allowed to permit same-sex marriage and LGBTQ clergy members for the first time in the church's history.

The plan would need to be approved in May at the denomination's 2020 General Conference in Minneapolis, Minnesota.

Instead, they agreed to postpone the sanctions and instead allow a vote on the splitting of the church in May.

The proposal was mediated by Kenneth Feinberg, who worked on the 9/11 Victim Compensation Fund.

According to the nine-page proposal, $25 million would be given to the new "traditionalist" denomination. In return, the new denomination would drop all claims to the original United Methodist Church's assets. Churches that wish to join the new denomination will conduct a vote within a specified time frame. Churches that wish to remain under the original United Methodist Church will not have to take any action.

The writers of the plan told the Washington Post that the division would be “the best means to resolve our differences, allowing each part of the Church to remain true to its theological understanding, while recognizing the dignity, equality, integrity, and respect of every person.”

Editor's note: This story has been updated to reflect that the proposal requires approval by the 2020 General Conference.