Video showed 2 police cruisers lurching into a crowd of demonstrators in New York City, knocking several to the ground, after people attacked it with thrown objects. 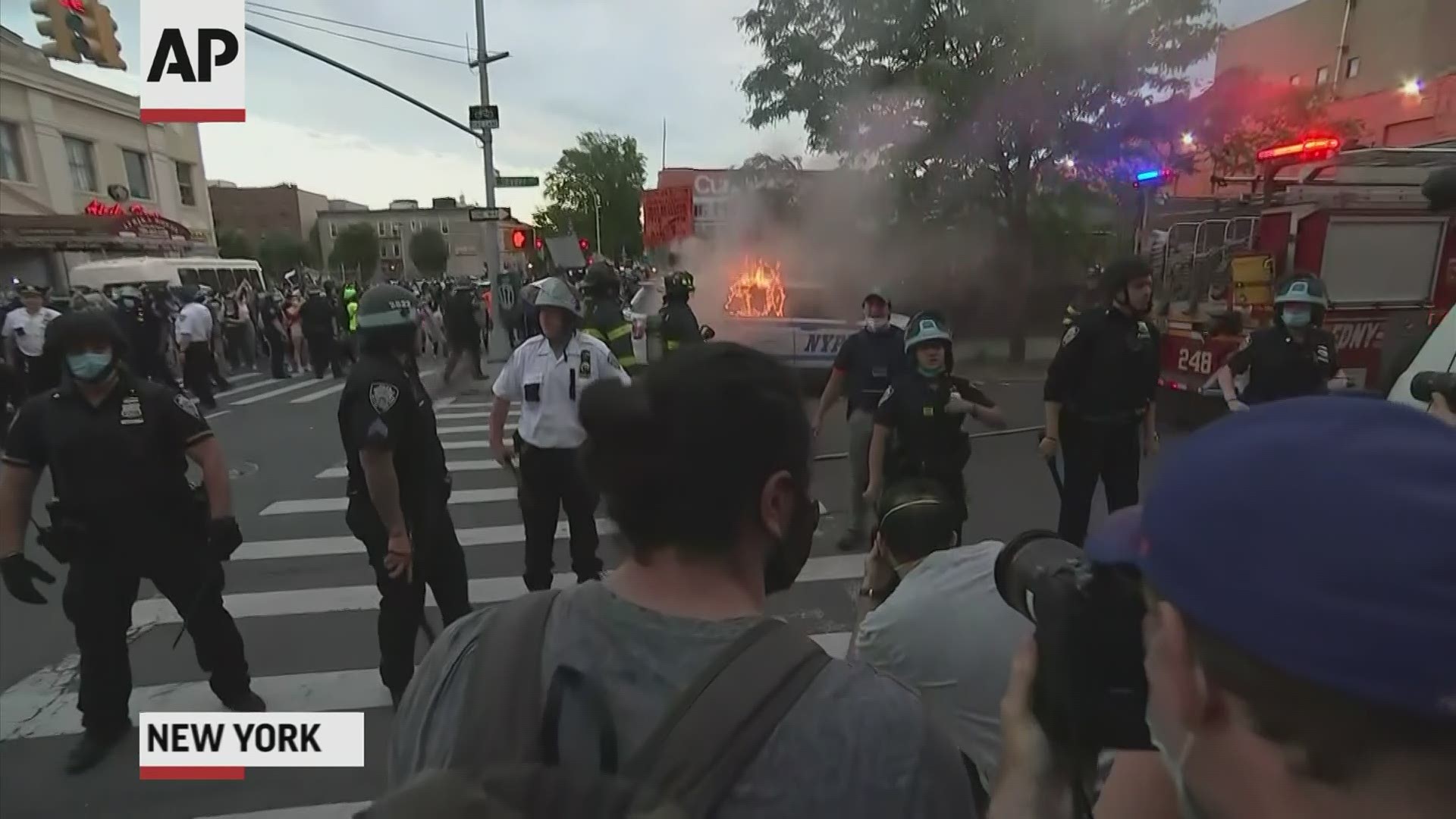 A large crowd marched through Harlem, chanted outside a police precinct then blocked traffic on the highway along Manhattan’s East River. Farther south in Manhattan, thousands of demonstrators paraded around Union Square. Other groups marched through Brooklyn and Queens.

Dangerous confrontations flared repeatedly. Video showed two police cruisers lurching into a crowd of demonstrators on a Brooklyn street, knocking several to the ground, after people attacked it with thrown objects, including something on fire. It was unclear whether anyone was hurt.

In numerous flare-ups, officers sprayed crowds with chemicals. Protesters smashed the windows on police vehicles, sprayed them with paint and set a patrol car on fire.

The protests, among many around the country over the killing of George Floyd by a police officer in Minnesota, came a day after several thousand people faced off with a force of officers on the streets around a Brooklyn sports arena.

De Blasio, a Democrat, expressed solidarity with demonstrators upset about police brutality, but promised an independent review of the Friday night disaster in which a mob set fire to a police van and battered police cruisers with clubs and officers beat people with batons.

Gov. Andrew Cuomo said he had asked the state's attorney general, Letitia James, to lead an inquiry and make a public report.

The mayor said he was upset by videos of confrontations “where protesters were handled very violently” by police, including one that showed a woman being needlessly thrown to the ground.

Credit: AP
Policemen surround a NYPD vehicle after it was vandalized by protestors over the death of George Floyd, a black man who was in police custody in Minneapolis, on Saturday, May 30, 2020, in the Brooklyn borough of New York.

One demonstrator in Friday's confrontations, Samantha Shader, 27, of Catskill, New York, was arrested on an attempted murder charge after police said she tossed a homemade firebomb at a vehicle occupied by several officers. The device did not ignite and the officers were unharmed, police said. Police also arrested her sister, Darian Shader, 21, on charges of resisting arrest and obstructing police.

Credit: AP
New York Police officers push back protesters during a demonstration Saturday, May 30, 2020, in the Brooklyn borough of New York.

They were in custody Saturday and it wasn't immediately clear whether lawyers had been appointed to represent them.

City police said in a Twitter posting Saturday evening that federal charges were expected to be filed against “multiple” people for incidents involving homemade bombs.

Police Commissioner Dermot Shea said more than 200 people were arrested and multiple officers were injured Friday, including one who lost a tooth.

Asked to comment on videos that showed officers shoving peaceful protesters to the ground and hitting people with batons, Shea said those acts would be investigated.

But, he said, “It is very hard to practice de-escalation when there is a brick being thrown at your head.”

“It is by the grace of God that we don’t have dead officers today,” he said.

Elsewhere in the state, the mayor in Rochester declared a state of emergency and a 9 p.m. curfew after demonstrators destroyed police cars, setting one on fire, and officers responded with tear gas canisters.

The protests were all held in defiance of a statewide ban on gatherings imposed to stop the spread of the coronavirus.

“This is bigger than the pandemic,” said Brooklyn protester Meryl Makielski, referring to the outbreak that, until recently, was killing hundreds of New Yorkers each day. “The mistakes that are happening are not mistakes. They’re repeated violent terrorist offenses and people need to stop killing black people. Cops seem as though they’ve been trained to do so.”

The Rev. Al Sharpton addressed several hundred people gathered in Staten Island at the spot where Eric Garner died after being placed in a chokehold by a police officer in 2014. He was accompanied by Garner’s mother, Gwen Carr. The crowd held a peaceful demonstration outside the local police precinct.

Sharpton noted that Floyd, who died Monday in Minneapolis after an officer pressed his knee into his neck for several minutes, had also fallen unconscious gasping for air.

“Right at this spot is where we heard Eric Garner say what six years later was said by George: ‘I can’t breathe.’”

Cuomo noted that Floyd's death was just the latest in a long list of similar deaths, and he said he shared in the outrage over “this fundamental injustice.”

“But violence is not the answer. It never is the answer," he said. “The violence obscures the righteousness of the message and the mission.”

Credit: AP
Police officers protect themselves with shields as protesters throw debris during a rally Friday, May 29, 2020, in the Brooklyn borough of New York, at the Barclays Center over the death of George Floyd, a black man who was in police custody in Minneapolis. (AP Photo/Frank Franklin II)