While Clay held the majority of votes in communities where Bush defined her political activism, Bush got out the vote in areas that chose Clay in 2018 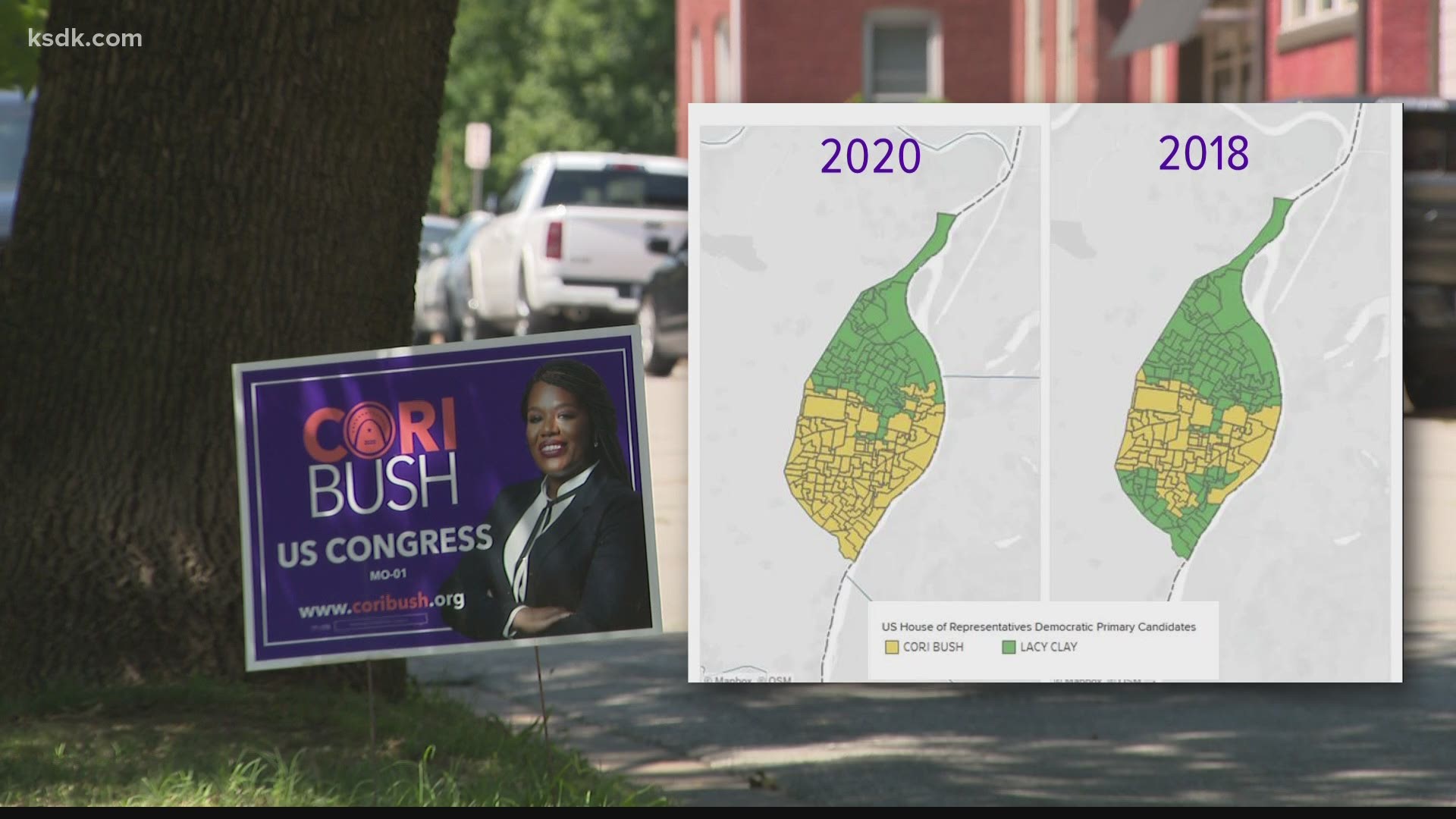 ST. LOUIS COUNTY, Mo. — The new Democratic candidate for US Representative of Missouri’s first district is well known for her presence at protests in St. Louis County, where she also lives.

“Ferguson-made activist” is in the first line of Cori Bush’s biography on her own campaign website.

But in Tuesday’s primary race, most voters in Ferguson and Florissant townships chose her opponent, incumbent U.S. Representative William Lacy Clay, Jr. Political analyst Anita Manion thinks the legacy of Clay and his father, who together have occupied the first district seat for 50 years, played a major role.

“I think that you have a lot of voters there who have been voting for someone named Clay for 50 years,” said Manion, “and that there's a lot of loyalty among those voters.”

Clay won the most St. Louis County votes within the district, although the margin of victory was narrower this year than when Bush and Clay were on the primary ballot in 2018. Two years ago, Bush gained 32% of the votes in district one in St. Louis County, while Clay received 60%. This year, the balance was 46% going to Bush and 49% going to Clay.

The biggest change for Bush happened in the city, particularly the wards that border St. Louis County to the south. In total, she upset Clay’s 2018 majority in six of the city’s 28 wards.

On top of that, Bush won the 11 St. Louis city wards with the highest voter turnout this year. In Ward 8, almost a third of all registered voters came out to vote for Bush.

“Democratic approval of the Black Lives Matter movement increased more this summer than it had in the previous two years,” said Manion. “So it might be those people from Tower Grove, in Shaw and south city, are now connecting with the movement they didn't connect with before and Cori Bush is part of that movement.”

Manion pointed out that the tone of Clay’s campaign toward Bush’s financial history may also have pushed voters away.

“If you get a mailer from your congressman that says, ‘You shouldn't vote for this woman. She's been evicted,’ but yet, you're on the verge of being evicted in the midst of a pandemic and economic crisis, that could have made Lacy Clay seem more out of touch with his constituents,” she said.

Bush’s victory and high voter turnout could be a sign of what’s to come in November, when voters choose not only their U.S. representative but also the President of the United States.

“We could see an instance here where enthusiasm to vote for someone like Cori Bush could bring more voters out and then improve opportunity for up ballot candidates like Joe Biden or Nicole Galloway. So this actually could have a positive impact for Democratic candidates and initiatives, if there's enthusiasm around these candidates for November,” said Manion.