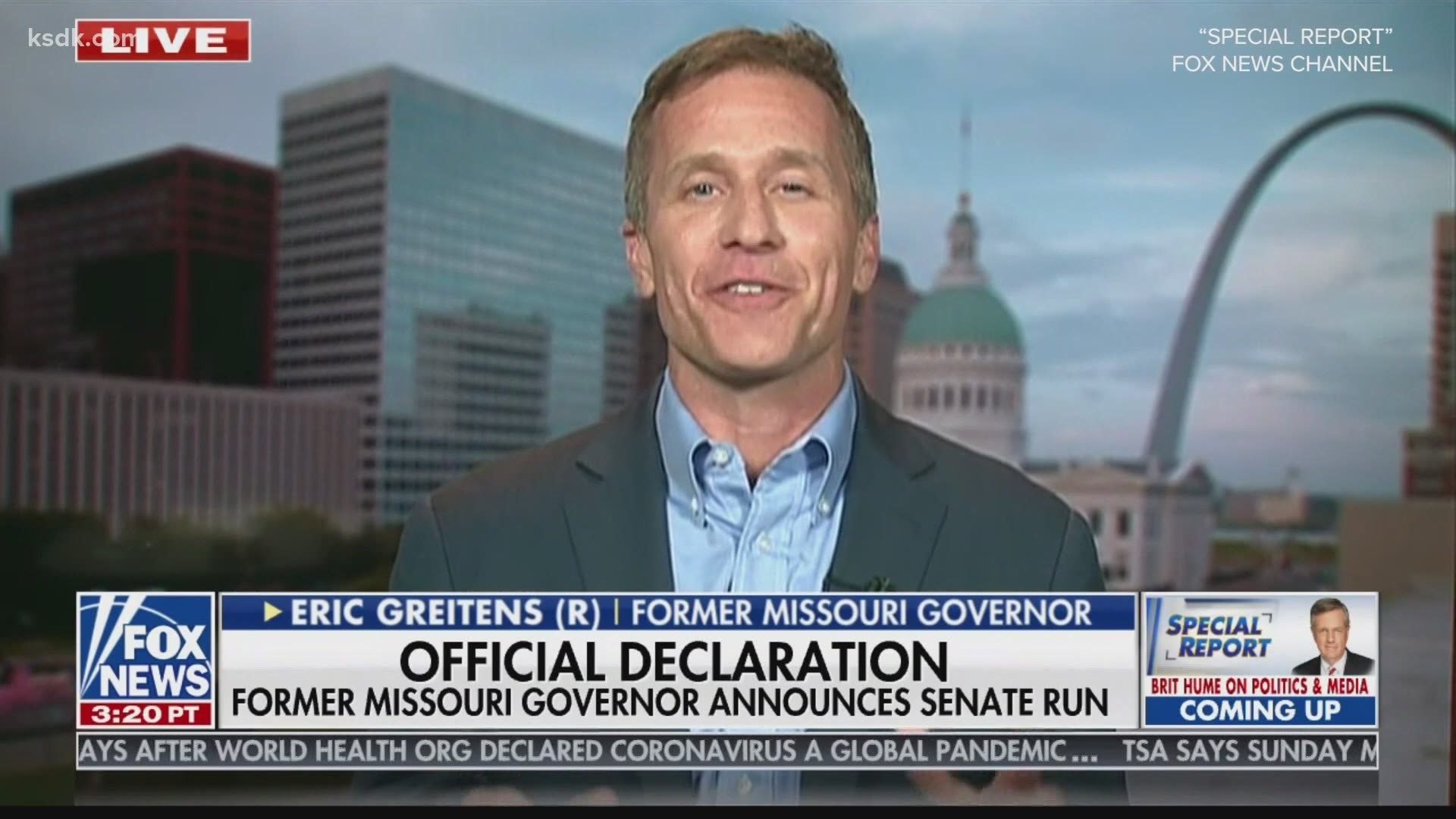 Greitens made the announcement on Fox News Monday night while being interviewed by host Bret Baier.

The race is wide open after Blunt announced he would not seek re-election in 2022. Other potential Republican contenders include U.S. Reps. Ann Wagner and Jason Smith, Missouri Attorney General Eric Schmitt.

Missouri Secretary of State Jay Ashcroft was considered by many political experts to be a frontrunner for the seat, but announced he would not join the race. Earlier Monday, Missouri Lt. Gov. Mike Kehoe also announced he wouldn't be running.

According to the Associated Press, Greitens is unpopular with much of the state's GOP establishment but maintains a core of support that could be just enough to win a multi-candidate primary.

“My sense is that the Republican Party has probably sent a clear message to all potential candidates for Blunt’s seat that they want to consolidate their efforts behind one candidate, and a candidate that will be successful," Webster University political scientist Bill Hall told the AP.

Greitens has said he is exploring a Senate run, and he remains the wild card in the potential GOP field. The former Navy SEAL officer was once seen as a rising star in Republican politics, possibly even a future presidential candidate.

Those aspirations seemed to vanish in 2018 when a extramarital affair three years earlier was exposed. A felony charge accused him of taking a compromising photo of the woman as potential blackmail if she spoke of their encounters.

Greitens then faced a second criminal charge for allegedly using a donor list from his charity for his political campaign. Legislative committees also investigated him.

Greitens, who is now divorced but was married at the time, admitted to the affair but denied wrongdoing in both cases. Still, he resigned in June 2018 and the criminal cases were dismissed.

St. Louis University political scientist Ken Warren said that despite the scandals, polling has shown Greitens with fierce support among about one-third of Missouri Republicans. That support might be enough for a primary win if several establishment candidates siphon votes from each other.

“Republicans want to win back the Senate, and to do so, they must hold Blunt’s Republican seat,” Warren said in an email. “Greitens would be a very risky candidate for the Republicans because he certainly could lose, even in the red state of MO.”

Longtime Republican operative John Hancock believes it’s too early to say the field is narrowing to just Schmitt and Greitens. He noted that most of Missouri’s six Republican members of Congress are considering a run, and they're all veteran fundraisers.

"These are folks that potentially will have adequate funding to mount a serious race,” Hancock said.

Blunt was the fifth Republican senator to announce he will not seek reelection, a retirement wave that might lead to an ugly campaign season next year and give Democrats fresh hope of preserving their Senate majority.